Control panel to plug multiple plugs into, with on/off switches

I am trying to find a switch box control panel I can plug my laser, cooler and airpump into with on/off switches for each or one main switch. Anyone have any suggestions where I can start looking?

This may not be a direct answer to your question, but the system I’m using is a “squid” power strip, although any ordinary power strip with sufficient room will work. The sufficient room aspect is that I’ve added remote control modules to each outlet with the one master control stuck to the laser with a magnet. 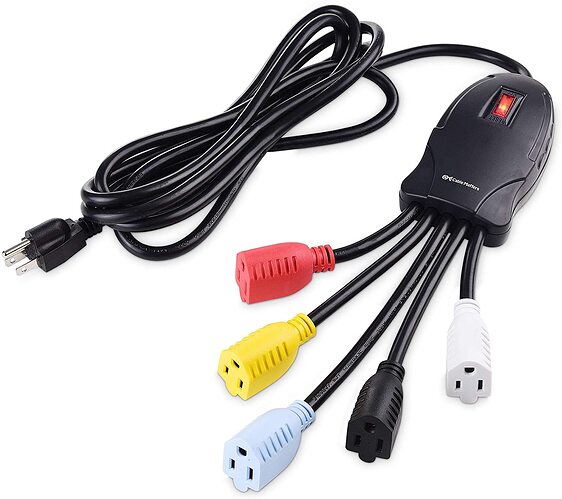 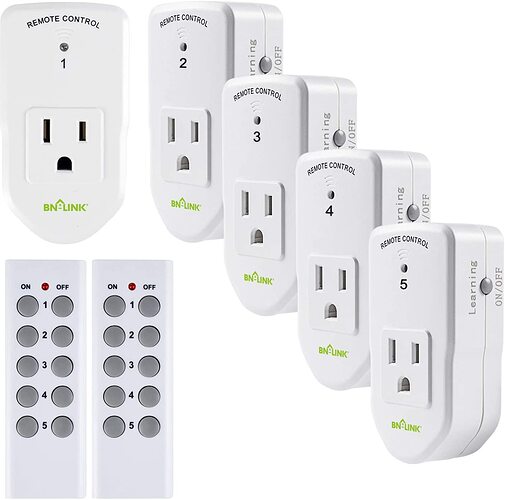 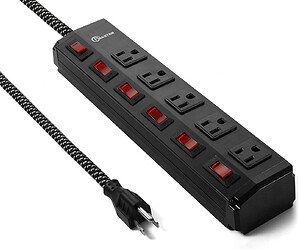 I have a couple of those individually switched power strips. It’s fine for the items I can connect that allow the wiring to cluster in a specific area. I already had the remote power modules and control for other purposes, so it floated to the top of the pond.

One can mount the power strip on the side of the laser, in a convenient location and flip switches as needed. I would have gone that route if it hadn’t come in second in the timeline.

I have been using the Kasa smart plugs around my home lately, they are inexpensive, and have a button to turn them on/ off on the side. 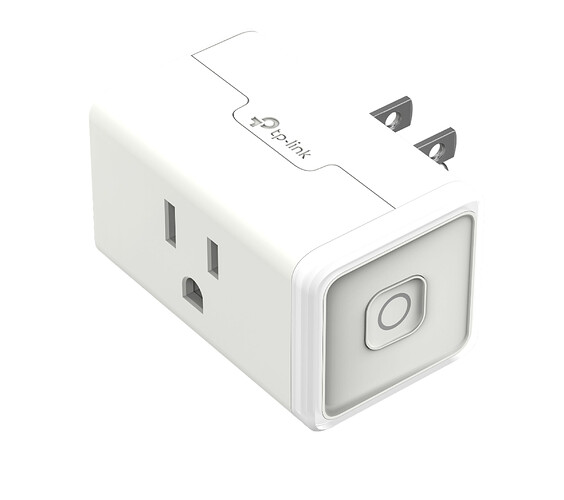 You could put several of them in a stack on a power strip, and press the button on each to turn things on and off. Or, you know, much fancier home automation fun.

I’m using cheap ones from Amazon which work with Alexa, have button and as I like statistics, they can provide the kWh spent

Here is what I use, but there are many options

Out of interest I made a console box for my Blue/Gray 750 x 500 which controls everything. The AUX switches power to the outlets on the back of the machine one of which I have my air compressor hooked up to.
The Air Assist is the manual override for the Ultimate Air Assit. 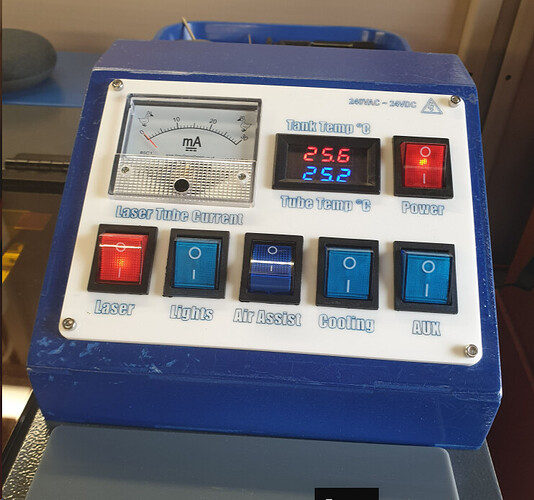 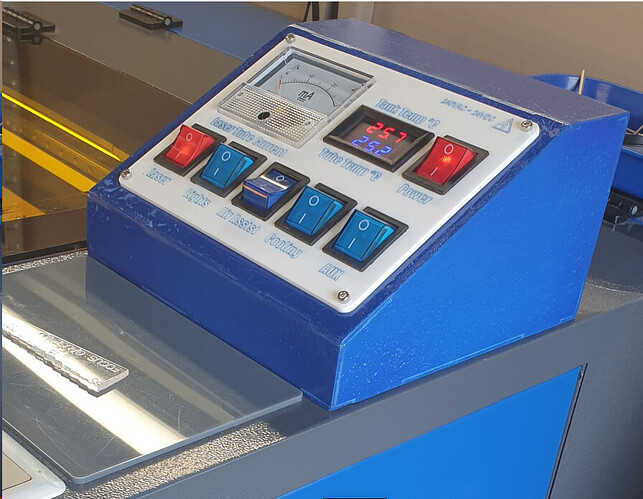 Does the job just nice.

That’s exactly what I was looking for. There is nothing pre-made out there I guess.

I could send you the files if you’d like

That would be amazing! Thank you! abugabby@yahoo.com

You may wish to edit the file to suit your specific requirements and your laser.
consol-panel.lbrn (112.5 KB)

What kind of controller do you have? I have a Ruida, but if you want to control it by switches that’s ok also. I use a SSR attached to my Ruidas ‘Status’ sink connection. The positive side of the SSR is 24v from the Ruida controller. The power for my stock air compressor and exhaust fan are turned on when the machine starts a ‘job.’ It can be powered up and on the network without the exhaust and compressor running.

These SSR use 3 - 32 vdc to turn them on. The big advantage is you can switch your load with a simple supply of between 3 and 32 volts dc keeping the mains far away.

I use several power strips that are plugged into separate switched outlets using double electric switch gang boxes having a light switch to turn the outlet in the second gang, I have my controller, lights, and cooling fan on one and have my exhaust fan, laser PS, water pump, gauges on another switched gang. It is wired so that the the laser PS group can not be powered up without the circuit with the water pump and fan and controller powered up. I have also wired a safety switch to shut my laser off without cutting power to anything else.

A Little further explanation for anyone interested.
I just wanted a single power cable coming into my laser and the main Power switch turn everything off. So on the switch panel:

Power: As just stated, turns everything off. Simply relocated from the side of the machine.
Ammeter: No explanation needed.
Tube temp: Sensor it taped directly to the glass tube.
Tank temp: Sensor is in the water cooling tank.
Laser: Relocated from the side of the machine.
Lights: removed the useless small LED strip that came on as soon as you powered the machine on and installed some better LED lights (pic below) which are actually 240V.
Air Assist: Cloudray Ultimate Air Assist but modified so that instead of powering the stock air pump it opens an additional solenoid to let the air in from a proper compressor (so much better).
Cooling: This powers one of the 3-outlets on the back of the machine with my cooling pump (Fish tank pump plugged in). If I need to put my hand in the tank I can just turn the power to it off on the panel.
AUX: Put power to another one of the outlets on the back of the machine. I have my compressor main power plugged into this. As I dedicate it to the laser its convenient and the compressor is also powered off when the Laser is off. 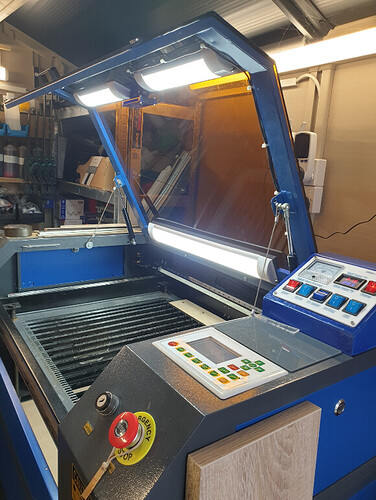 The warning label just denotes the two voltages inside the console.

The only thing I have powered separately is a Fish Tank Heater which I leave on all the time in the winter to keep the temp at 15-20C. Powered separately so it is on when the laser is turned off.

Like your lights. Have plans to put my big compressor to work. In the middle of a home move, so things are heck tic.

What exactly does the ‘tube’ temperature tell you. Never seen it monitored before.

I have the opposite issue here. It’s always too hot in the SW desert

Each case will be slightly different but in general terms the manufacturers will have a running temperature specification. Too low and the laser power will be down and too hot could damage or at least shorten the life of the tube. Generally 15C - 30C is the rule of thumb.
In my case with a cheap crappy claimed 60W (really 50W) tube I need the tube temp up to min 15C for the tube to work well at the power setting I use for each material type. It performs consistently up to around 28C where I find I could turn the power down by 5% or so to get the same result. Once the tube reaches 30C I stop for fear of damaging the tube.
The downside is that it takes hours for the cooling water to drop enough to start cutting again unless I drop ice packs in the water tank. I would like to have a CW5200 chiller but unfortunately I have other priorities (like a new tube

) before one is justified.
In winter I use the fish tank heater to keep the cooling water from freezing and nearer to what I consider my working temperature. As the cooling pump turns off when the main power is off I do have an 80W tube heater I lay in the machine cabinet under the tube to stop in freezing.
In terms of monitoring two temperatures I get lets say a prewarning that I will soon have to stop as the cooling water tank temperature is getting to the point it loses cooling efficiency and the tube temperature climbs rapidly.

It would be nice if there was a Chiller with a heating function as well.

Given your location has your working area got aircon? If your ambient temp is consistently cool enough you may find that the water tank and pond pump cooling is fine.

No the typical temps here this time of year is around 106. Many nights during summer, night time temperatures don’t go below mid 90’s. I don’t have a choice with it. That’s why I have a 5200. The other ‘chiller’ units would just help heat it up. I am in the middle of a move, north, but it is still warm and rarely freezes. I will have it indoor by that time with proper ventilation. I steer clear of any place water turn hard naturally. Thanks for the education.

I have most of the parts for the air assist, but moving, everything is packed away. I feel extremely lucky to have a machine of this caliber