Cutting an outline in acrylic and the corners are not cutting as seen in the design. This causes the piece to be “stuck” in the acrylic, which breaks if forced out. There must be a good reason for this. Attached is an image of the “design” and the back (with paper) of the acrylic with the incomplete cuts.

Any ideas on the cause? I have auto-join on, and have manually done a “close vector” but same results. 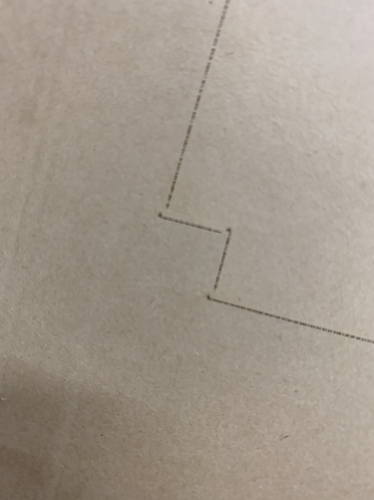 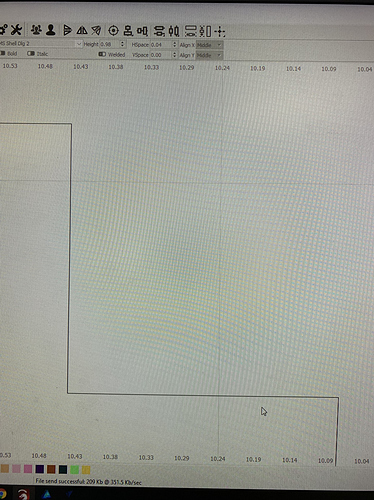 What was your Min Power setting? At 5 mm/sec speed, you’re below the default cutoff where it starts ramping the power up from Min to Max, so it would only be using Min Power (this is a Ruida controller behavior, not a LightBurn one).

I am able to get a break through with another pass, but that seems too much. I’ve cut acrylic before without issue, so I am thinking I have something wrong in the software … but perhaps not. It’s odd how the “corners” look.

What direction was the cutting?top to bottom or bottom to top? Baklash?

How thick is the material you are cutting? Is it all one continuous line so that the laser isn’t shutting off and back on at the end of the lines? If it is very thick material and there are line segments (even if there are no gaps) I was wondering if it was due to beam drag.

The material is 3/8" acrylic. The cut is continuous, but it does only have the issue at sharp corners.

Can you post the file? It’s possible that there’s something weird in the settings - that actually looks a bit like dot mode is on.

It looks like the image you posted is the bottom side of the piece, if so then slowing down should solve the problem. I have cut tons of 3/8" acrylic - beam drag is an issue, especially when the cut barely makes it through.

There also appears to be a bit of backlash.

Thanks for the feedback and help thus far. It does seem to be simply an issue of speed and power. The odd part to me was that I had used this same acrylic and settings before without issue – but perhaps there are more variable. I changed it to a slower speed and a little more juice and viola!

There are indeed so many variables;

I generally cut at a lower speed than I know will get through. It is much better to take a minute or two longer than to have to re-run the job because some parts didn’t get cut properly. I also get straighter edges - the top and bottom of the kerf are the same width.

Is this possible for high speeds also? I wanted to work with a speed of 300mm/sec at 50% but the corners would not be drawn/cut either. My trick for now is to downscale the power as low as possible (10%) and work at lower speed (20mm/sec) but it seems odd that my lines can not be connected for higher speeds.

What type of machine / controller / tube power / etc do you have?

I don’t know the model of the machine but it is controlled by GRBL and the tube power is 130W.

What version of GRBL do you use? GRBL-LPC has parameters that let you tune the lower end of the power ramp so you can “pull it up” to where a high power tube ionizes. I’m not certain 1.1f has this - it wasn’t really meant for high power lasers. The alternative would be to use the GRBL-M3 driver, which doesn’t use power ramping.

I want to reorganize my GRBL GCode generator to allow these to be used by the same device, but the way it’s set up right now, the M4 based generator assumes “laser mode” is on, and the M3 generator does not. If I decouple those, you’d be able to use M3 for cutting and M4 for marking.