Installed a camera last week and did the calibrate lens and calibrate camera steps which seemed to go fine. Tried today for the first time to align a cut using the camera and found the cut was consistently off in two directions. I made a 5mm x 5mm alignment grid and cut a 20mm square. The first cut resulted in the lower cutout in the image attached. I add a -15 x shift and a -20 y shift in the camera control panel and the second cut was right on the money from where the box was set in Lightburn before it was sent to the laser. Any idea why I need to add these shifts? I redid the calibrate camera step and there was no change in the result, I was careful to ensure that the camera was set at the focus height for the material during the calibration step. This seems consistent and I don’t suppose there is an issue to have the shift but just wondering why it is needed. I’m using a Ruida controller on a Thunderlaser Nova 24 laser. 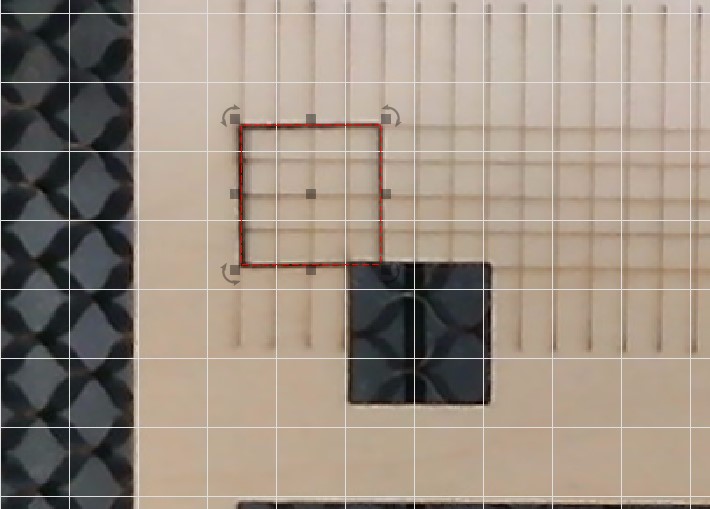 Did you calibrate the lens, or the alignment?

I did both procedures.

How do you have the camera mounted? If it has any play at all it will do this - Thick double-sided foam tape, for example, has enough flex that it can be off by quite a lot. I recommend a hard mount with either a thin double sided tape, or screws, glue, etc.

It is in a 3D printed mount that is attached to glass on the lid with thin tape. It looks like it is in the same place as when installed. I saw the issue and went through the calibration of the camera using the 4 points to set the position and did the test a second time so the offset is consistent. The result was the same both before and after redoing the calibration. I had actually first noted the problem yesterday when I tried to align an object on a box top using the camera and it turned out to be off just like my first test showed today. I did not redo the camera lens calibration since there doesn’t appear to be distortion in the image. Thanks.

You shouldn’t need the shifts, it’s true. I’m not sure why they’d be required if your calibration was accurate.

Is there anything in the lens calibration setup that could end up with a result like this? I guess I could try it again. My camera is mounted towards the front of the bed and not perfectly centered over the bed but the calibration numbers for all nine positions were good enough that the software moved on to the next location of tests.

I can try again when I get a chance, I did a couple of orders this morning using the camera alignment with the shifts and results were consistent so not hurting anything from what I can tell.

I just keep thinking it is something other than mechanical when I redid the calibration with the 4 points as I’m sure I wasn’t in exactly the same spot on the bed and there had to be bit of variation in my picking the spots?

Did you re-use the existing markers, or run new ones? If you re-used the old markers, just placing them on the bed, that is just about guaranteed to be the issue.

I did reuse the old markers. So that would keep the “problem” consistent for me. I’ll get back to you, I think there might be something going on with how I’m focusing, may be a user error so let me follow up a couple of things! Thanks and I will redo the camera alignment with a new set of markers before I go further!

It doesn’t have to be one continuous piece of material - you can place four slices of wood or cardboard in the right spots with the frame function, and as long as they don’t move you’ll be ok. (just make sure they don’t move)

Got it, redid the camera calibration with a new target and much closer, the offsets are -2,-3.With a bit closer focus and better eyes, could probably get even closer but not sure it’s needed. I think I’m having an issue with my autofocus being consistent so that might have a contribution here as well, going to follow up with Brian a bit before I get too more worried about this.

My camera is actually closer to the center of the bed than I thought, I have full coverage from where I’m at so probably not a reason to redo it at this point, if the tape becomes an issue, I would assume I would start to see inconsistencies in positioning of the laser but right now, the offset is very repeatable so don’t think the camera is moving. Thanks for your help!