Hello, i was reading around here and on google but I can’t really find a good answer for me and maybe you can help me.

I want to make a DIY laser/ cnc but the problem is that I don’t know what Board to use that will meet all my needs.
I like the new one from the Neje master 2s the fact that is 32bit but I need to connect Z axes to. So the laser will lower with each pass in LightBurn or for when I want to focus.

I appreciate all the help that I will get from this forum and you don’t even know how much you will helm me with your answers.

Welcome to our forum. From the spelling of your name it seems to me you are of Romanian descent. Bine ai venit!

There are many options for a DYI . My first observation was that you are referring to an 80 watt diode. I’m pretty sure that for an 80watt you would need a CO2 laser.

I find it very hard to believe that the 80w diode in your listing is actually 80watts. I feel it’s not accurate.

What do you plan on making with it? The Neje is a hobby machine for very small projects. Dont expect anything super fast.

Cheers and again welcome to our community.

Well, I don’t know what is the real W of that laser diode, but it does show in video that it cuts 8mm plywood in single pass and 3mm with 400speed/min so I am happy with that. Now I have a 30w neje laser attached to my Rotrics arm but I need to cut faster, engrave faster. I need to cut 3-4 mm plywood but mostly will be engraving. Is just a hobby for me and try to sell a few things that I make. maybe later in time I will get a co2 laser, until then that laser from Aliexpress looks perfect :D. Normally I wanted to buy the 40w Nejes master 2s max ( I know the optic power of that is 15w). But after that, i thought … why not build my own machine so I can use the laser that I want and add a spindle that I can use to engave and cut the acrylic/Plexiglas until I will have the space and money for the co2 laser. Yes I am from Romania

and thank you for your fast reply.

Hi, i’ll not be a lot of help as fairly new to this but shall be watching with interest.

This is the laser that I will use: 80w Diod Laser

80 Watts of output power with 40 Watts of input power. Cuts through 8mm ply in one pass. With no air assist as well I assume. 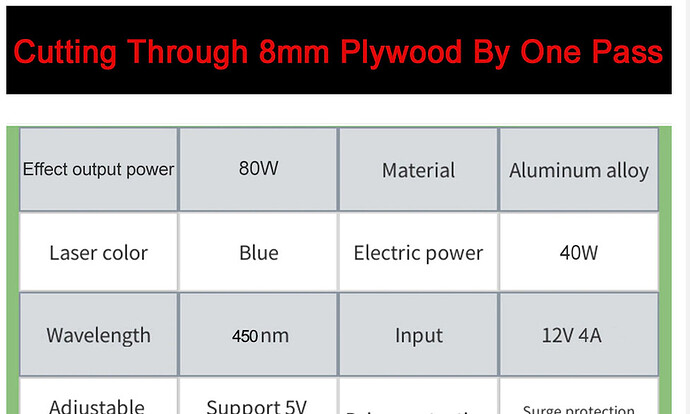 We all know that was a bad writing from them, but my question remain the same and can help others to who want to make this project with this laser or other diode laser.

I have not heard of an 80W diode either, or heard of anybody that has one. I think I would want some references of those who have bought to see if the advertisement is true (only 2 reviews which are not credible) and if it was in fact true, why would anyone need a C02?

We all know that was a bad writing from them, but my question remain the same and can help others to who want to make this project with this laser or other diode laser.

80W is certainly achievable from a fibre-coupled diode laser, but an 80W one runs to many, many thousand of US$ more than a decent CO2 tube costs.

The other choice is a diode linear array - normally water-cooled and run at 808nm, used for medical procedures and in 20W/module, so you gang 4x 20W units to achieve 80W.

And just as an FYI, Neje may claim ‘15W optical’, but they’re lying. Any manufacturer claiming more than ~8W optical for a 5V diode is lying. Another FYI is that I look twice at cutting 8mm ply, even on a 100W CO2 - the quality of cut suffers terribly and the speed is very low - 10-15mm/s.

Don’t expect great things in cutting from any diode claiming to be 20W and above.

Anyway, you are looking at the wrong end of the scale when looking for a controller - it’s not just about the bits, it’s also about the speed and the capabilities. If you want a grbl-based or similar board with 3 axes, you either want a LPC1768/LPC1769-based board like a Coherent or a Smoothie, or a DSP controller, like a Ruida or Trocen.

If you don’t want to pay for a Coherent or Smoothie genuine board, there are a few half-decent ones available on Aliexpress like the MKS SGen L : Makerbase MKS SGen_L V1.0 3D Printer Parts 32Bit Control Board approval TMC2208 TMC2209 TMC2225 uart mode|3D Printer Parts & Accessories| - AliExpress

Don’t read that as an endorsement of that board - I was just pointing to one that meets the spec.

It will run Smoothieware and take advantage of the high-speed mode available in Lightburn. It will also run grbl-LPC, Marlin32, and Klipper (although Klipper doesn’t support lasers).

Because with CO2 you can cut transparent acrylic, things that you can’t do with diode, and is faster at cutting. I bought it , and we will see how things will turn out. But for that I need to build the device the rest of the device

I found this Board and I don’t know if is the same as Coherent or if is a typo mistake from you. The other one from Ali that you showed to me, I don’t see it to have a laser port like others that I have seen. Somthing like this: Board 1

I was thinking a that cohesion board, I just wanted some second opinion, or fi others have it, or if is something else better for what I need, and that is S0-S1000 like that Orture or Neje board, but with the Z possibility.

and one more thing, the specify that the laser: Operating Voltage: 9V. So maybe there is something…? 5v it is for the TTL/PWM

I found this Board and I don’t know if is the same as Coherent or if is a typo mistake from you.

The other one from Ali that you showed to me, I don’t see it to have a laser port like others that I have seen. Somthing like this: Board 1 I was thinking a that cohesion board,

I just wanted some second opinion, or fi others have it, or if is something else better for what I need, and that is S0-S1000 like that Orture or Neje board, but with the Z possibility.

The only reason it’s a ‘laser’ port is because someone screen printed the word ‘laser’ on the PCB. It’s got a large number of PWM-capable pins for you to use however you want. It’s a very flexible board.

Those are firmware configuration settings. Of course it has PWM control using the S parameter - it has a much better PWM control - 12-bit vs 8-bit harware controller.

The second board you linked to is not something you should buy, in my opinion.

and one more thing, the specify that the laser: Operating Voltage: 9V. So maybe there is something…? 5v it is for the TTL/PWM

Your diode will have it’s own driver, the control of that driver will come from a PWM pin, configured to be the output from laser control commands.

If you’ve got US$200 to spend, get the Cohesion if you want - that one is designed as a drop-in replacement for the K40 CO2 laser, with all the right connectors for the front panel, etc. You will have to re-engineer it to work with your diode-based machine, so why not save $150 and get one that’s more suited to a DIY implementation?

They use the same chip, the same firmware, but the DIY one has more ports and is more flexible in more situations.

I see now that they even have a V2 board " Makerbase MKS SGen_L V2.0 3D Printer Parts 32Bit Control Board 120MHZ MCU TMC2208 TMC2209 TMC2225 uart mode" , I ask about the board and things like this because I really don’t know nothing about them

. But from what I see on this board I can even mount a 3d touch sensor, that they sell, wifii, etc. I just have to find out were on that board I have to connect the laser. The question is… thas that board support spindle motor? Because I want to have 2 in 1. I hope dis discussion will help others in the future to and i thank you for all the reply’s.

The board doesn’t care what you connect to it - it can offer pwm on a multitude of pins - if your device (spindle, laser, sensor) is controlled by pwm, that board can control it.

Edit: yes, looks like a well-appointed board with everything you might need to run a decent small laser.

The only thing it doesn’t have that their Sgen v1.3 has is Ethernet. But, it does have the 120MHz processsor and a wifi option. I’ve used wifi with a smoothieboard bit for CNC router, not for laser where the speeds are much higher, which is why Ethernet on their 1.3 board is so useful.

I am glad to hear that and thank you for your reply. One more question and is the final one, you think that board will be able to support the laser that I posted in my fist post? And can I use the LightBurn software? If yes, then I will go with that one

and I thank you all for your support. I hope this post will help others to.

If it has PWM/TTL control, any board that supports PWM will control it.