I’m a new user to Lightburn, and just wanted to share a few feature suggestions that would greatly improve the software IMHO.

That’s my big four at the moment.

Please let me know if there’s a solution for any of these, otherwise, please consider these for development.

In the settings, change the tool button size. I can’t make the buttons bigger for everyone without getting beaten up over it by all the folks with low resolution displays.

Maybe there’s an option somewhere for doing everything in relative coordinates?

Press Shift, Ctrl, Alt, or Ctrl+Shift. All of those combinations apply a multiplier to the move.

Jogging with the arrow keys

Use the Number pad keys - these jog the machine.

It’s too easy to accidentally hit the “Home” button

GRBL has a setting to disable the homing cycle. If you turn that off, the home button won’t do anything. Set $22=0

For the keys, I don’t have a numeric keypad on my laptop, so that won’t work. The option to use the arrow keys would be nice.

If the machine is turned on at the centre, I can’t jog the current position below machine 0,0. Am I doing something wrong?

In the device settings, turn off $J jogging. This is a feature of GRBL designed to prevent you from slamming into your rails without trigging a limit alarm.

Honestly, adding homing switches to your machine makes a big difference in overall usability, since you can now use all the things that use absolute positioning, like the Click-to-Move feature, stored positions, Print & Cut, the camera, etc. LightBurn has functions for things like jogging the laser to a specific point in the current selection, for example. Select your design, click the ‘Move to lower left’ button, then move the wood there. Then click the ‘Move to upper right’ button and check that you’re still lined up, and go.

I don’t know what programming language you are using…

LightBurn is written in C++, and built on Qt which has some internal handling for high-DPI displays. The version we’re on doesn’t have as much high DPI support as it could, and moving forward to newer ones presents other issues, like dropping too many MacOS versions, and new bugs.

Yay, turning off the $J jogging has done the trick. That’s a big step up in useability for me.

I couldn’t find the button for “Move to lower left/right”. However, the frame functions are great. Any chance to use the “Fire laser” option along with this, so the outline can be seen on the workpiece? I tried it, but the laser gets turned off before the frame trace proceeds.

Any chance to use the “Fire laser” option along with this

How do I turn on my diode at low power to focus it or frame a job? FAQ

Diode lasers often don’t have a red-dot pointer like CO2 lasers do, so it is often useful to enable them at low power for focusing or framing. (Please do NOT do this if you have a CO2 laser, as the beam is invisible and this could blind you or start a fire) In LightBurn, go to Edit > Device Settings, or click here: [image] Turn on the ‘Enable Laser Fire Button’ switch (make it green): [image] Quit LightBurn and re-run it. You will now have two new controls in the Move window. A … 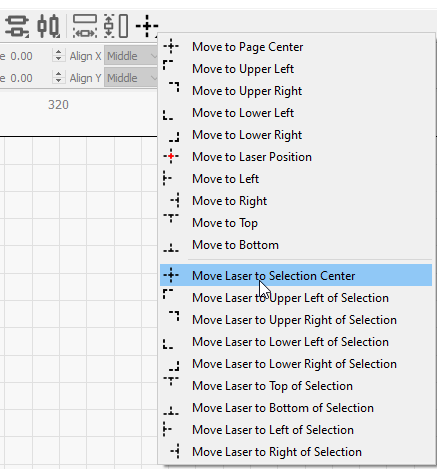 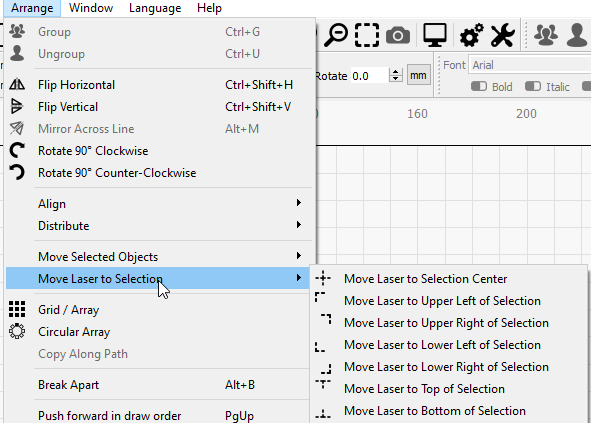 Or hold shift when pressing one of these in the Arrange (Long) button bar to have the laser move to this corner of the selection instead: