Fill and Line color, Is WHITE an option?

Hi, I am rather new at using LightBurn. I have been using corel draw for many years but my Boss laser will not play nicely with my CDR files.

Long story short I found the best way for me to bring over my CDR files is to open them in Corel Photo Paint, save them as a high resolution JPEG and open this JPEG in light burn. I then Trace Image and have had great luck with most everything converting over well.

The one issue I am still completely stuck on is the outside perimeter line still being BLACK in color.
I pre punch out by shields (shape) so this outside black line around the shield is causing it to engrave an unwanted thin line. Does anyone have a fix around of how to remove this or simply just change it to white therefore it would not etch or engrave there?

For example what I do in coreldraw with my current laser (epilog) is the outside perimiter line I turn RED and set that at zero power to not engrave. This allows me to perfectly line up my shield in the exact center. 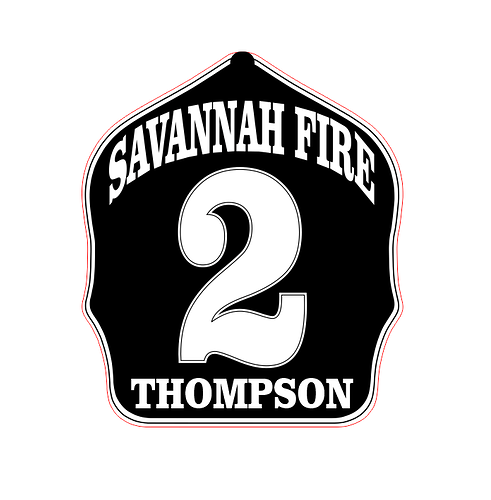 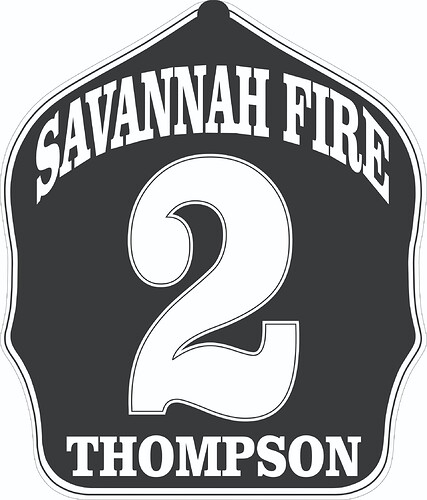 Here is a stock sample of a pre cut shield before lasering.

And an example of one cut on my previous laser. 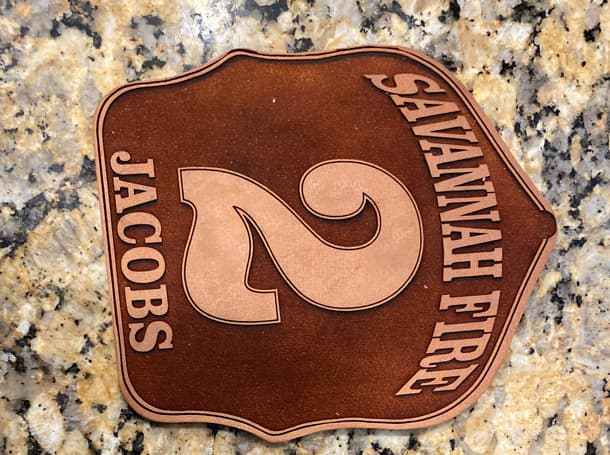 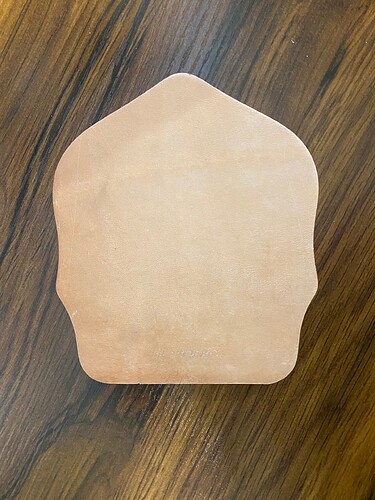 I found the best way for me to bring over my CDR files is to open them in Corel Photo Paint, save them as a high resolution JPEG and open this JPEG in light burn. I then Trace Image and have had great luck with most everything converting over well.

I suggest you export the file to SVG from Corel. This will retain vector data.

The reason you’re getting the thin line is because of the trace. The reason it’s a little hard to remove because the line is touching the top of the shield making it in effect not an outline but part of the main shape.

Really, though, solutions 2-4 are for a problem that’s being unnecessarily created. Would be best if you can use SVG.

You can move that outline on one of the tool layers (T1 or T2). This won’t get output to the laser but can help you with the framing and get it all lined up with your pre-cut shields.

I could be understanding this completely wrong but this is a post I made the other week when bringing it over as an SVG. Was loosing parts of the design that I needed to keep (layers around the 2 in the center, and the exterior layers around the perimeter)

Bringing an SVG from coreldraw to lightburn. Coming over in wireframe? LightBurn Software Questions [OFFICIAL]

Hi, I have been working in coreldraw for years but recently purchased a Boss Laser which runs on LightBurn. Extremely new to using Lightburn and am having issues when i convert a file over. I am using the lightburn Macro I found online which i believes convers the file to a SVG? Unsure if I have settings setup incorrectly but the image is not coming over correctly for me. I will include two images (first will be from corel draw *everything in my corel files that are black are laser etched away w…

Thanks Marcus, I am rather new to this still. I believe i moved the exterior portion to the T1 tool layer like you were speaking of. Would this cause the entire exterior past the white perimeter to be lasered away as well since it is black? Or since the (orange) tool layer is over that would it cause that area not to be etched away? 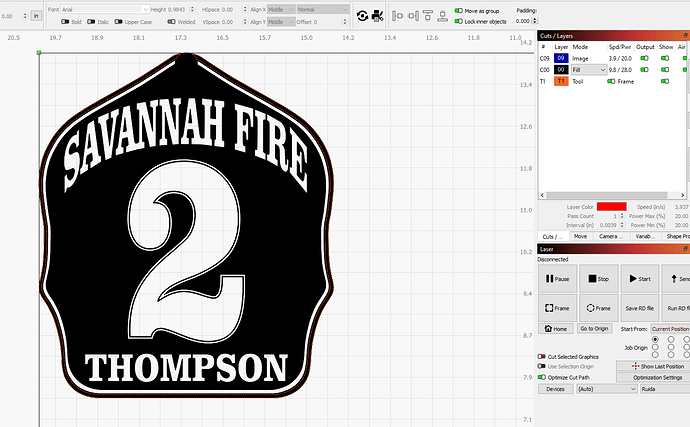 Is this what you’re looking for?
Thompson Test–LightBurn File (MW edited).lbrn2 (1.5 MB)

Hi, Yes that would work PERFECTLY! Would you mind breaking down how you got to that?

I’m glad that was what you were looking for.

Ok, I’ll have a go at explaining how I did it before I drag myself off to bed!!
I selected the outermost line and offset it inwards by 0.0762mm (I arrived at this figure after a bit of trial and error and some educated guesswork). I then moved this outer line to the T1 layer. I then selected the object that had been created by the offset command and performed a boolean subtract of the outer white area. I then repeated it with the other white area. I did these booleans so that I could remove some small extraneous areas created by the outlines overlapping each other in places. It’s difficult to explain but if you go through the procedure yourself you’ll see what I mean. Actually, now I think about it I only needed to boolean the outer white area, I didn’t need to do it to the inner one as well.

As @berainlb said: it would be far better if you could manage to get it into LB directly as a vector rather than converting to raster then back to vector. Would you be willing to post the CDR file (I’m on 2018 so it would need to be this version or earlier for me to be able to read it)?

Thank you for all the help with this. That took alot of your time and work to discover so thank you. Would be a long process to fine tune all the thousands of CDR files I have to get them to work in LightBurn with my Boss laser

Of course I can upload the CDR file, I will save it in 2018 and 2017 to make sure one of them will open. I will “convert to curves” on one of the two files incase it gives you trouble with the font I used.

Seems to not let me upload a CDR file here. Can you message me with your email and i can send it there?

Just to give further info, I did download the Corel to LightBurn Macro but was still running into issues as the previous mentioned posting I listed showed with the way I work in layers and with text and shape outlines. The outlines and overlapping seems to be what is giving me the largest issues with converting these files over. Ive been in contact with Boss Laser tech support, LightBurn tech support and Corel tech support all with no real solution.

Yes, unfortunately the forum is very restricted with the file types it will allow you to upload. The way around it is to append ‘.txt’ to the file name. I can then just remove that when I download it. If you’d rather email it I’ll drop you a message with my email address.

Hmm. I know very little about this. Are you able to explain how to add the txt? I tried renaming it but im guessing its deeper then just doing that? If you wouldn’t mind sending me a message that would be great

Would you mind uploading the file here when you have time sir? Might help others to be able to play with it as well since I was having issues uploading it with the txt

Hi Berainlb how are you? If you would like me to send you the CDR or SVG file as well please let me know. I could very well be doing something completely wrong

No problem, see attached. You can either replace the .CDR with .TXT or what I prefer to do is append .TXT after the .CDR extension. It obviously doesn’t change the file in any way but it tricks the forum software into accepting it.

FYI: If by any chance you’re not seeing the .CDR extension on your system it might be because of the immensely stupid setting on default Windows systems where it hides extensions of known file types. This has got to be the dumbest setting ever! I always turn that off immediately on any new system as it can cause all sorts of unnecessary grief.

I’ll take a look at the files as soon as I get a moment.

If you would like me to send you the CDR

I don’t have CorelDraw and haven’t used it in years so hard to advise you. A few major things to look out for though:

Ok, I’ve been working on your file and added some instructions and hints/tips to help you make the artwork ready for LB. I’ve also attached an end result where I’ve followed the instructions. This will hopefully show what you’re aiming for and is able to be imported into LB using the macro. After importing into LB there are a few things you need to do but that’s explained in the file containing the instructions. Hopefully it will all make sense! I had to save the annotated version as 2018 as I got a warning that some features I’d used weren’t supported in version 16. BTW, don’t forget to remove the .TXT extension

Hi Berainlb, I tried opening the same SVG file back into CorelDraw and it opens and looks perfectly. When i open it in LightBurn it is still having issues.
I also checked the colors to ensure there were only two colors being used in the entire image, Black and white no other variations (thank you for bringing that up i never thought to check that)
I did also ensure that the entire image was all on one layer incase that was giving me issues as well. The text itself it layered on top of itself to give that double effect on the 2 but all items are in the same layer in corel draw. 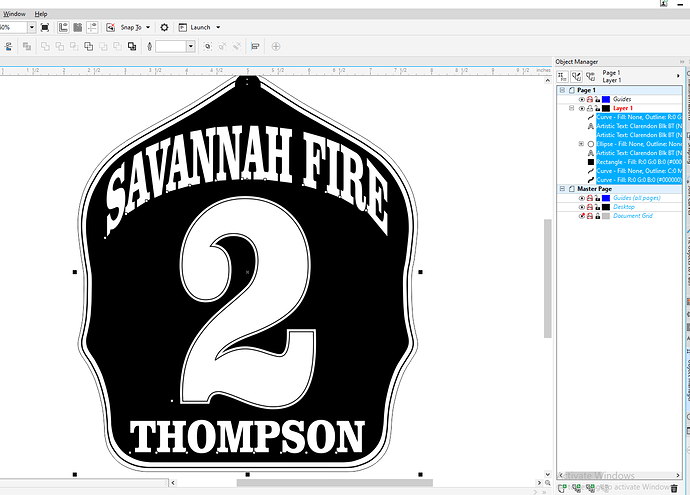 When I was working on your CDR file I noticed you were actually using three different ‘blacks’. One was RGB, one was from the LightBurn palette and one was CMYK. Although they’re all black LB interprets these differently. The RGB and LB palette blacks get put on layer C00 but the CMYK black gets put on layer C27. I think I made a note regarding colours in the annotated version I posted above.

EDIT: btw, LightBurn ignores Corel layers, it determines which layer to put things on depending on their colour.

Have you had a chance to look at those CDR files I attached @laddercoleather ? If so did you find them useful?