The controller in my 36x24 recently “went out”, in that, I was able to fire the laser from the test button on the power supply, but not from software (RetinaEngrave installed) or from the panel “test” button.

In speaking with FSL Tech Support (less than helpful) they determined that it was the control board and that it was no longer supported. Hence the need to swap controllers I chose the Ruida 6445G and LB after some reading and thus ordered and installed the new control board this week.

That brings me to today - I am still experiencing the same issue, although new issues have cropped up and the original is intermittent now.
I am hoping that some of you may be able to help me narrow down and troubleshoot the following?

I’ve done the following to troubleshoot:
Checked min/max power at the controller and LB - it’s ±5% min / 35% max
Checked the wiring and have matched it to the resources on this board (thank you for that!)
There isn’t a water protection signal that I can find, but there is a door protect that I’ve bypassed by cutting the wires and joining together (and have tested both “open” and “closed”)

I am attaching what images I have, but would love to hear what your suggestions are! 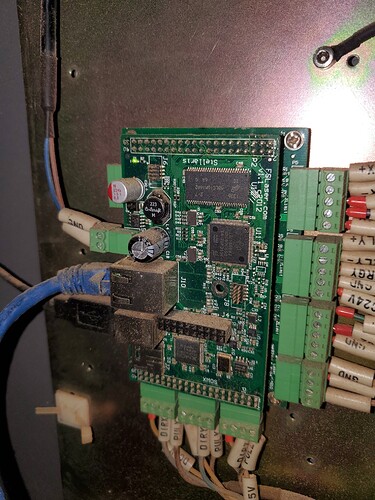 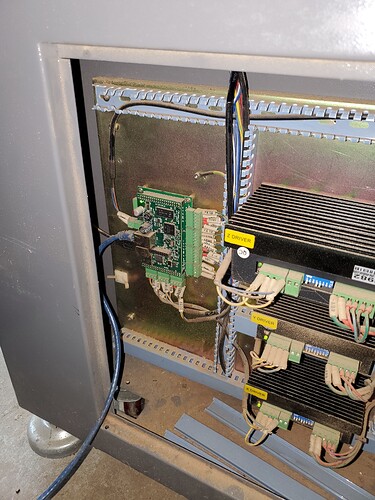 Very dirty (but clean now) of the power supply. These go to the 6445g and to at least the door sensor. There is another wire (Red and Black) that go somewhere else, but I’ve not been able to trace them fully.
The Brown and Black go to the door sensor (bypassed) 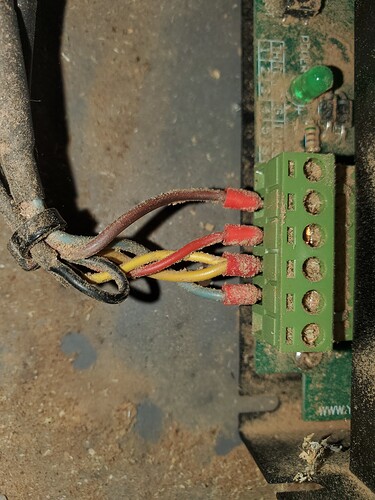 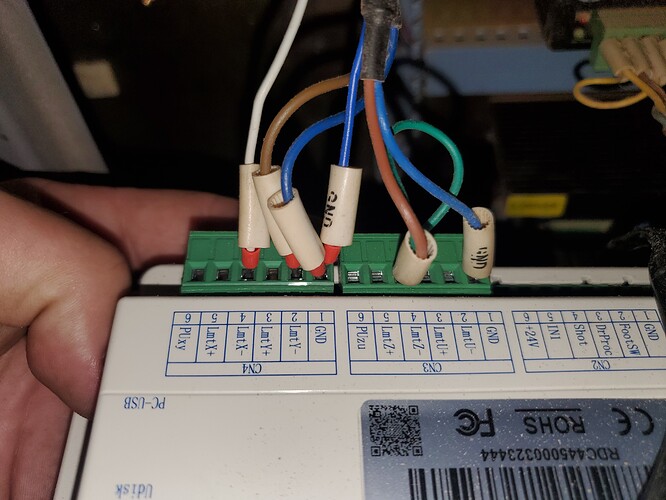 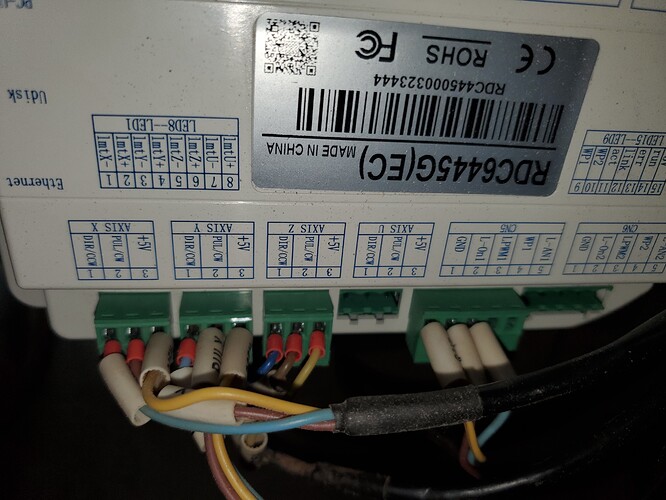 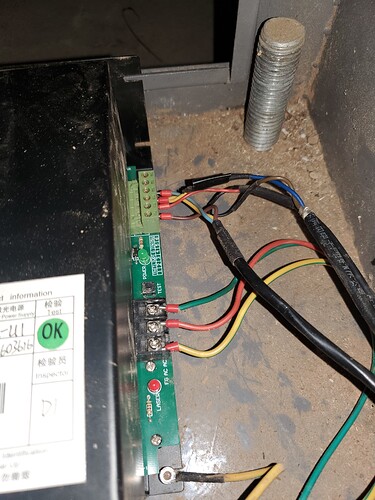 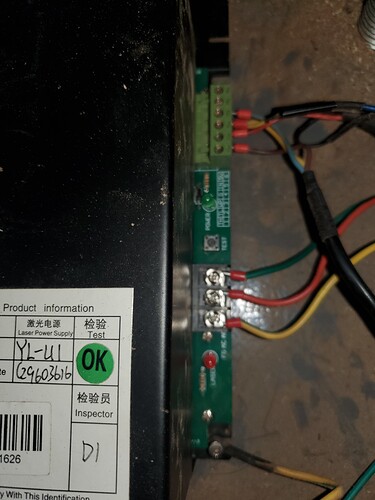 I have some more images that I will add shortly.

This is totally off from your query, forgive for that.
Your machine is in terrible condition. Do you ever do cleaning on it?

If you go to the following website, they will be more than happy to help you out. This is where the Ruida controller experts tend to hang out.

Ha! Of this, you’re correct.

It has sadly sat in my wood shop and hasn’t been run in a bit of time. Other priorities after a move and Renovation and all… No excuse, but I prioritized getting it operational before a proper clean.

Thank you! I’ll check it out.

Added some additional images of the (dirty. I know.) Wiring.

I checked out the forum, thank you, but wasn’t able to find anything that was of direct help. I’ll keep checking there though as there are some good discussions going on!

I know this is a dumb question, but have you enabled the laser to fire in lightburn?

This is no need to manually override protection circuits, like the water protection or door interlocks. Twisting the wires together is unnessary, as the Ruida controller will allow you to enable or disable them via the front panel. I think you can change it in Lightburn also. The door protection on my China Blue is turned off.

I believe I have, but honestly am not sure? I’ve never used LB before so there’s some education needed there.

I purchased a new power supply and installed it (myjg100w), decided to NOT hook up the water protect lead to test and still cannot get the laser tube to fire, either from the panel or from the PS test button.

I disconnected the Ruida controller and can successfully fire the laser with the physical test button on the PS.

Ive reset the Ruida to default, ensured that the water protect was turned off via the control panel, bypassed the WP on the PS by jumpering it to GND, and have checked all connections…

When firing from the PS, without the controller connected, I am getting 60ish mA (from the PS LCD), the “laser” LED lights up and it will fire a beam.

When the controller is connected with only 3 wires (GND, Low and In), pressing the test button on the PS will light up the “P” and “L” LEDs, but not the “laser” and it won’t fire.

What am I missing?

Was there anything salvageable from the ex controller as far as configuration data?

These controllers are highly customizable and my experiences with these types of devices is usually configuration issues.

Thanks, Jack - I appreciate the follow-up.

I think I have it wired correctly, and I’ve reset the Ruida to defaults (in case I messed something up). unfortunately, there are no settings recoverable from the original FSL controller that I could find.

The Ruida was sent from the manufacture, and I simply wired/plugged it in. I messed with some settings, i.e. - turning off the 2nd laser, increasing the min power settings / decreasing the max power settings, and changed a few other parameters (not messing with the stepping/speed until I have the power/firing issue).

I can send screenshots if those would be helpful, and am not afraid of reading if there are links/manuals that you can recomend.

My Ruida was configured by Om Tech or the vendor they received it from. There are a TON of different configurations that you can manage. First thing I did was read it from the controller and save it on Google drive and my own files.

Resetting the defaults to something that isn’t correct (I.E. doesn’t work) is not going to help you diagnose anything. Unless the manufacturer of the model laser you have configured the controller for your machine I believe that’s your problem.

My assumption at this point is again, who configured it? What manufacturer sent it to you Mattel Toys?

I think you’re also making assumptions that are taking you down the wrong road for a proper diagnosis. Do you have access to anything other than a voltmeter, such as a scope?

It generally sounds like the controller is working. It homes and doesn’t crash. Where it ends up is probably just your origin setting. I have more of a concern your problems are configuration.

Move the head to some other position and press the ‘origin’ button on the controllers panel. That will set the current position to where ever the head current location. And after homing on power up, should return there.

Setting MAX and MIN may also be an issue, although at this point I doubt it. DSP controllers use this to determine power change when there is a speed change. I would set them both at 20% until you have some kind of operation. I selected 20%, only to ensure your laser is firing. Set them the same until you’re up again. You don’t need much power. You don’t want the controller outguessing you at this stage.

Good luck, can’t think of any pictures that will help at this point. I can’t see where the wires go anyway.

My assumption at this point is again, who configured it? What manufacturer sent it to you Mattel Toys?

The controller was purchased as an after-market as a drop-in replacement for a Full Spectrum Pro 36/24 Laser - the controller itself was purchased from Cloudray via Amazon. Sadly, I was not able to pull or back up the Solaris (default controller from the FSL Laser) settings prior to making the swap.

Move the head to some other position and press the ‘origin’ button on the controllers panel. That will set the current position to where ever the head current location. And after homing on power up, should return there.
That’s very helpful to know! Thank you.
I’ll see about pulling the LB configuration and sending it over tonight.

I appreciate your help with this!

Glad some of it helped…

I’ve reset the Ruida to defaults

What exactly do you mean by “reset to defaults”?

If you performed the “factory reset” on the Ruida, then it is for sure no longer set up correctly for your machine. The factory default is “one size fits nothing”. When the manufacturer of you machine installs the controller all those factory settings are replaced by something meaningful for your particular build of machine, step size, bed size, door switch and safety inputs, and a whole slew of parameters that are particular to your machine.
By resetting to factory default you lose all the data that made the controller “fit” your particular machine.

The controller was purchased with factory default settings, so I am not worried about having set them back to the factory as a starting place. Cloudray was not aware of my laser type/model when i purchased the 6445.

I always knew there would be some setup and trial/error in getting then movement and homing corrected, but the laser not firing wasn’t one of them!

Right now - I can fire the laser when the controller is not connected to the power supply via the “test” button on the PS.

As soon as I connect the 6445 to the power supply, both the PS test and the controller pulse buttons will not fire the laser. I do see the “P” light up and the LCD states “water protect: on” when pushing the test button.

Releasing the button and the “P” LED goes off and the LCD displays “water protect: off”.

I do not have a water sensor (that I can find via tracing wires) connected and I’ve physically disconnected the door sensor.
I’ve ensured that the 6445 has water protection turned off via the control panel, and there is nothing wired to the controller anyway for water protection - only the X,Y & Z motors, laser control wires and 24v power.

I have to assume that:

I purchased the laser from them, but not the 6445 controller.

The FSL is around 6 years old and the Solaris controller that came with it is dead.

Sadly, their support is less than stellar (pun!) and they’ve already informed me that they would not be supporting my efforts to bring life back into the machine.

So at this point it’s up to you. I think a good direction is to get me your configuration data from the Ruida and let me compare it to mine. My target is to solve the controllers inability to fire the laser. It has to be at least one of two things… I can’t see any of ‘pins’ on the power supply as it what they are, so that would help.

It’s curious about the Water Protection (WP) line to the power supply. Also that the Ruida advises it’s changing states when it shouldn’t even be looking at it. I don’t see that operation on my Ruida. Mine is a 6442, so I’ll have to take a look at the differences. I have a document from them, but it’s translated from Chinese I think because most of it makes little sense. I can’t even find my model easily.

I have my chiller plugged into my China Blue and it just pulls the WP line to ground. So worst case you should be able to just ground that pin and it would think the waters running. That’s exactly what the original switch and how the chiller lets the controller know the state of WP. Of course this is for diagnostics only. WP must be functional in normal operations. This would eliminate those concerns about the WP circuit being an issue.

Lasers are notorious for fire. I hope you’ve removed the kindling from your laser.