Grbl vs Awc or other dsp

I have a K40 I got from someone that had modified it and it has a AWC DSP controller. I’m building my own larger gantry and laser cutter, and I’m looking for feedback on the performance / quality of cuts using grbl vs another DSP or smoothie.

Any recommendations? Does grbl based cobttollers cut as well as a DSP? Pros/cons either way?

The AWC will produce much nicer motion and better power control than any GRBL or Smoothie board. Smoothie is limited to one power change per millisecond, so it’s not technically possible to produce anything finer than 0.1mm dots at 100mm/sec with Smoothie - the firmware won’t do it without modification. GCode boards aren’t well suited for laser use because they treat everything the same - there’s no special handling for raster data, for example, so the barrage of tiny moves chokes the motion planner and limits the throughput. DSPs handle raster data differently than cut data, and optimize for this. If all you’re doing is cutting, this wouldn’t be much of an issue, but DSP controllers have better handling of low/high power as well. A CO2 laser has a firing threshold, and it’s simpler to set the low-end power value on a DSP system, and can be done per cut.

Depending on which AWC controller you got, it probably has a screen (possibly color) and will run jobs headless - You transfer to the machine, then the file is hosted there and can be run again without the PC. If the power fails, it will pick up where it left off.

On the other hand, with GRBL or Smoothie, jobs are streamed live, which can be troublesome if the connection drops, but can be a benefit because you can run jobs that would never fit in the memory of a DSP controller.

My suggestion would be to stick with the DSP for now.

Thanks for the feedback, I appreciate it. Do you have a recommendation towards any specific DSP’s

I have the Lightobject branded AWC708C Lite and I like it. It has built-in rotary support which is nice. The menus are easy to navigate once you figure out the lay of the land.

Do any of the DSP controllers handle a gantry with 2 y axis motors? Limit switches on both for homing / squaring the gantry on startup?

No to two limit switches on an axis, but yes to 2 motors, you just run two stepper drivers using the step & direction pins in parallel.

Can you run two limit switches in parallel?

You could do that for collision sake, but to make sure gantry is square at homing it would need to use two seperate drivers and limit switches. Each y axis should move to the home switch, which needs seperate control of each y axis. Then the gantry is square. Being square is rather crucial with CO2 with mirror alignment. I would have to square up the gantry prior to turning on the machine. This is possible with grbl and other gcode controllers, too bad they dont have that feature in dsp’s. (Yet)

It is never recommended to run dual Y axis steppers on a laser. If one of the drivers conks out, the gantry will skew and lock, causing the beam to be stuck in one place, and this can cause a fire very quickly. It is better to use a dual output shaft stepper motor to drive both Y axis belts.

Laser gantries rarely have enough mass to need dual Y steppers - as Anthony says, the single motor driving both sides through a connecting shaft is the most common approach.

I’m building a much larger than usual gantry. (60" by 60"). Getting to the point I’m not sure connecting does not introduce other issues.

I’m not sure connecting does not introduce other issues.

Such as? It is possible to use larger motors and connecting shafts if the gantry is that heavy.

With a shaft that long you can get whip at higher speeds. If you use a belt to connect the two, now you have two separate belt connections and pulleys for the axis. I’m not saying it can’t work, I’ve just never seen it done on that scale that way and have heard of the issues.

That makes the assumption that the shaft is unsupported. Larger machines often use a large, dual shaft motor connected in the middle, with a shaft / coupler pair connected to each side, like this: 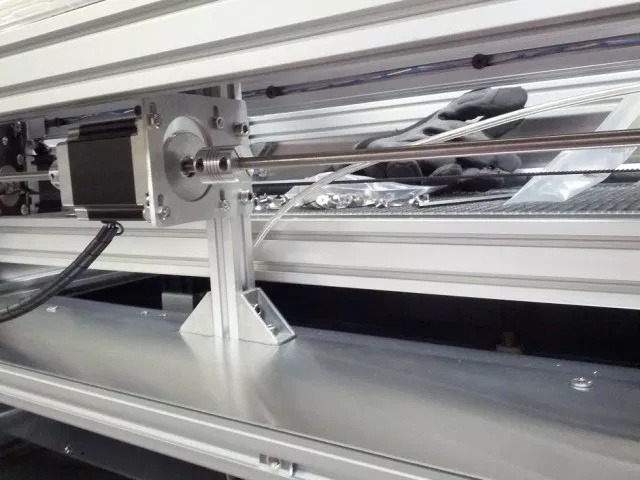 I’ll probably end up converting mine to a setup like that at some point.