Hello, I recently added a 2nd Ortur to my laser workshop and some unusual things started happening. I started to notice that my brand new 2w is losing power, and I don’t know why. Here are the specs 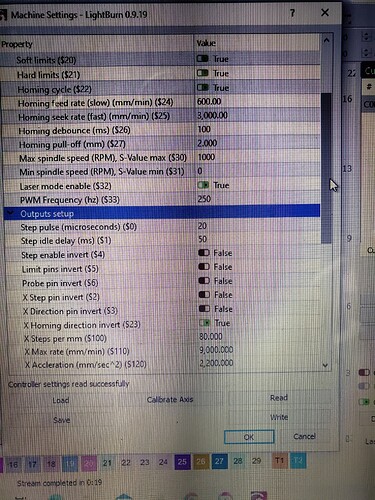 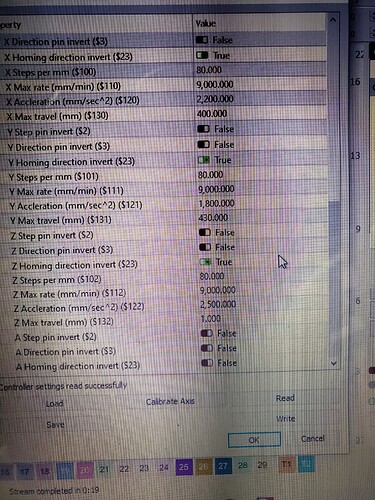 Do you think LightBurn eats up your laser power? Have you tried to do a test with the “original” software?

I’m not sure if it’s eating up my laser power or not, because I’ve never had a problem with it up until recently. I did notice that for some reason on one of my other orturs, the settings somehow got mixed up and resulted in both lasers not producing the same amount of power for the same image. For example, I was making a power test on a tile( Norton White Tile method) and the laser just stopped etching about three-quarters of the way through but it acted like it was still lasering and then went to the home position afterwards. I then noticed that my 2 Watt stock machine which I was able to get a white tile method working, now doesn’t even produce enough power to etch off paint from a canvas. I should mention that I used the same laptop for both lasers and it’s kind of old like 10 years old. I was wondering if anyone could see anything messed up with the settings first standard grbl.

It just sounded so weird, hence my reaction.
Do you have a copy of your “default” $$ settings? If you have recently updated LightBurn, you could compare your parameters with this copy and see if any unexpected changes have occurred.

Ortur announced they have had some bad motherboards as well as a grounding issue resolved with the information in the post below. You may need to reach out the the nice folks over at Ortur Support for additional troubleshooting procedures.

ORTUR LASER MASTER 2 - Service Notice - Grounding Full Documentation: http://ortur.tech/orturgrounding Some users have been reporting and experiencing Static Electricity build up in their machines while in use, especially on raster engraving operations. This build up of Static Electricity can become severe to the point that its discharge – via the 12v rail – can cause the motherboard to reset. Therefore causing interrupted engraving operations (Alarm 3/Connection Lost errors). In extreme cir…

I’m pretty sure the static discharge was probably the issue. It totally fried the laser but I got a grounding kit for free from Ortur for my stock 2w and that machine’s been working great. I’m going to build a grounding kit for the frame of the “20w” so I don’t have this problem again. What type of board does it use or could you point me towards an upgraded one? The laser module that I’m getting a replacement for is an actual 2w one.

could you point me

I’ll leave that to the community to comment. We support an assortment of laser systems driven using a variety of motion control solutions. A lot of choice available to best match the individual needs of each user.