Hello! 2 year old 100W Red/Black with RUIDA controller. I have ran thousands of cups on this machine and just noticed a firing delay when using my rotary. Has anyone seen this before? It looks like I am missing the first couple of lines and was curious if there was a setting I could use to compensate or if I should be replacing a power supply/tube/etc… 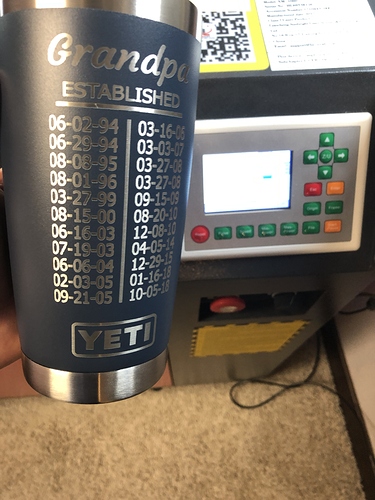 Any advice would be appreciated. Thank you! Aaron

Update! I have 2 identical machines and ran this on the other machine and HAVE THE SAME ISSUE. I’m starting to think this is software related. Is there a laser firing delay bug? Should I roll back my software? How do I fix it? Thank you!

Thank you for your response! Your link says that the page doesn’t exist or is private! 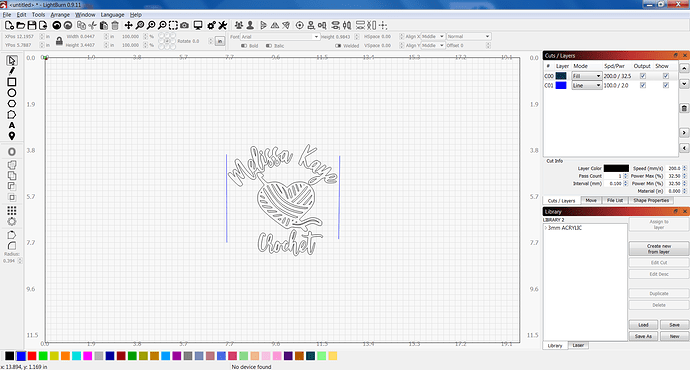 This was my fix several years ago and it works so I never could find out why this was happening and I know several others use the same fix now.
The black layer is set to what I want to engrave and the blue layer is set with only 2% power so that the lines don’t engrave. This allows the program and or the laser (never figured out which one was causing the problem as it IS NOT A SLIPPAGE PROBLEM) to calculate the line as part of the drawing and will make it start where it is suppose to for the image. Also by setting it up this way it includes the lines as part of the frame so be sure and put them close to your image. This set up has not failed me and wasted no more tumblers.
Hope this helps.

It’s not a firing delay - it’s slack in the belt or drive system on the rotary itself. When LightBurn runs the engraving, it rotates down to the bottom of the cup, then reverses direction for the engraving. If your rotary has any backlash at all, that direction change will expose it - the slack needs to be taken up before the cup will move, so the first few lines get engraved over top of each other.

Willy’s solution just puts something outside the bounds of the job so it will rotate past the engraved part, then back again, taking up that slack.

You could also try setting the Scan Angle of the engraving to 180, so it will run top to bottom instead of bottom to top.

Thank you! That makes complete sense. I have noticed a drop in the holding torque on the stepper motor that drives the rotary. Would this mean replacing the stepper with something a bit higher quality would also fix this issue?

If the cup moves properly and doesn’t otherwise slip, that might not be necessary. I would first check to see if there is a belt, pinion, gear, or other kind of coupling between the motor and the rollers, and make sure there is no play or slop in that. Adding a motor with 10x the power will have no effect on the problem if it’s a loose belt or pinion.

I’ve been doing the exact thing Willyivy does for few years now. Has nothing to do with LB, same problem when I used Rdworks. Easiest solution was to just put that little line in to make the laser fire sooner.

Very much appreciate you Oz. I tightened everything up and it’s much better. I’ll probably also look into motor just to see if that does anything because I think there is some backlash coming from these cheap steppers.

With this many folks putting lines in their designs, maybe implementing a pause feature on the rotary wouldn’t be such a terrible idea. It seems silly to have to do that to fix a hardware problem but I know you already do that for the scanning offset adjustment.

Again, thanks for the great software. Lightburn is the only reason I haven’t bought a US machine. I’m going to be due for a couple new machines here soon and would value your opinion. PM me if that is something you would be willing to share. Thanks again! Aaron