I use an Ortur Laser Master 2 (not pro) and i’ve mounted a Neje A40640 on it. I am very pleased with the new laser module, however I do have a wobbling problem with the OLM2 machine. Some pictures will tell you far better what i’m talking about : 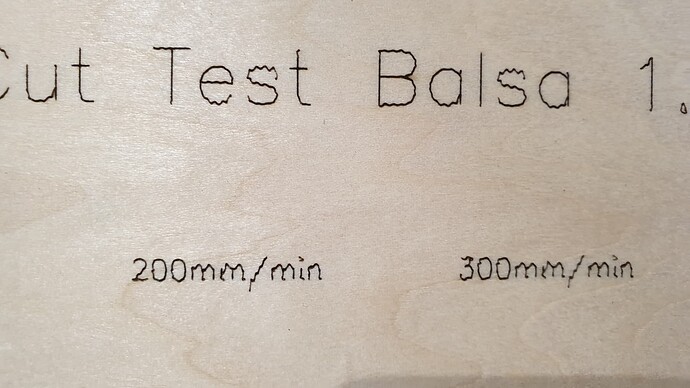 Following is the Z-Axis and adapter i’ve 3D-printed, in order to fit the Neje Module on the OLM2 : 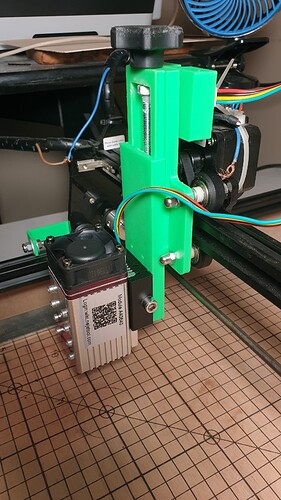 I think the wobble has to do with two things which are interdependant one another :

As you can see, the play is quite big and comes from the unit on wheels rather than the 3D-printed Z-Axis (which is very well tightened and solid).

Could you advise a way to kill this play so that my engraved lines don’t look as if my OLM2 had Parkinson ?
I mean, look at this marvelous “@” 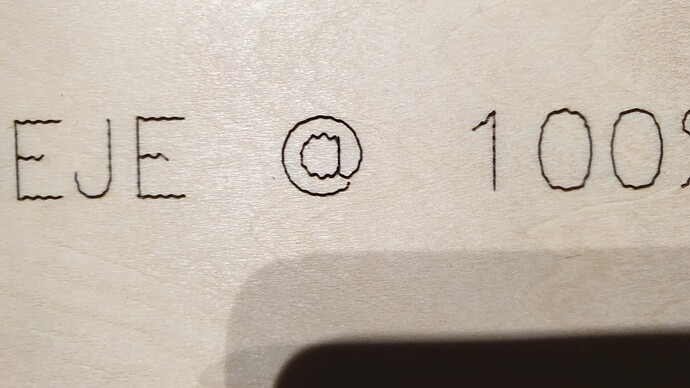 If there is nothing to be done with the OLM2, then would an upgrade to an OLM2 Pro machine solve this issue ?

Thanks in advance for your time and replies

Your problem seems to be physics.
You added basicly a pendulum to your machine

You can validate this by reducing the accelerations to a very very low vallue like 200 and reduce also the speed of the machine.
(granted this is counter productive to the why you bought the more powerful module on the first place)

There are things you can do. but we need to verify 1st
a) Eccentry wheels on the X gantry are adjusted? The 3d printer adapters tend to not be very acurate and might “spread” the screws lifting the wheels from the rail, you need to copmensate. Any slack between wheels and the rail (on the x)
b) What if you “lift” the material to the module instead of bringing the module to the material
Raise a test material as high as it can go to clear the X and the module. Then run a small test
c) what speed/Power settings you using?

Thanks for the quick reply. It is indeed physics-related. Although i haven’t testet yet, i’m quite positive that if I drastically reduced acceleration and speeds, and if I set a delay of say 100ms at the start of each burn, it wouldn’t wobble as much. But as you said, it’s sooo counter-productive…

For your questions,
a) This could have been it, but my 3D-printed adapter does not spread the screws, because I filed the holes a bit so that they fit very easily; no need to force in the slightest. So I actually dismounted it to see if there was slack even without, and there is indeed a tiny bit, which in my opinion is cause of the problem. If I push the bottom wheels up, there is no play at all and my problem would then be fixed I think… The orgininal module being well-centered in regards to the moving unit, this was no issue at all. But the Neje being so down, it makes things problematic because it creates, as you rightly say, a pendulum.
→ Is there a way I could have the bottom wheels pushed up, somehow? A way to “squeeze” them onto the gantry ?

b) Yes lifting the work plane up diminishes the problem a bit, but does not erradicate it because of the mass of the Neje, and the fact that it remains more off-centered due to the thickness of the adapter.

→ What is your opinon and the other solution of upgrading to an OLM2 Pro machine ? Would this problem remain, because I could then have the Ortur-made Z-Axis instead of a 3D-printed one… So the whole thing would be completely stable, wouldn’t it ?

→ Is there a way I could have the bottom wheels pushed up, somehow? A way to “squeeze” them onto the gantry ?

The eccentric nuts purpuse is exactly to do this. they rotate but dont “tight” they snug the wheels UP or down 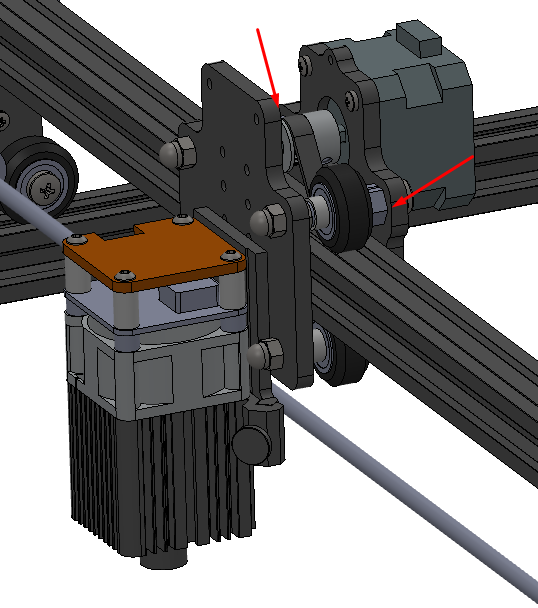 → What is your opinon and the other solution of upgrading to an OLM2 Pro machine ? Would this problem remain, because I could then have the Ortur-made Z-Axis instead of a 3D-printed one… So the whole thing would be completely stable, wouldn’t it ?

The way you have it set up its a bit tricky you have too much mass above and below the attachement point
There is something you can try, which is a try only, add mass to the back to counter balace it. like balaster

Heres the main problem
One is trying to fight 3 “deamons” at once
You bought a more powerful module to gain speed
But by its specificities the module needs to be held Low
So you are fighting physics with physics, which is a whole can of worms
Would be slightly counter productive to have a more powerful module, but ending up to move slower because the physics.

I would first of all remove the whole 3d printed part, and attach the module bare
LIft the material to the module.
Is this better?
If so you might have to compromise on your lifting mechanism

You might have noticed most brands make them simple and limited, for a reason. Not necessarely because its “cheap” but because mass causs the problems you are facing.
Think Co2 machines. the head is made as lightwaight as possible too for this very reason

Absolutely brilliant answer. Thanks a lot.

Yes it is exactly as you say. I fight many demons at once and each one makes the other worse. But i remain optimistic, there are solutions. One is, as you suggested, to raise the working plane and ditch the Z-axis adapter. Since the Neje module is movable in the Z direction, I could use that if I ever have to work on thicker materials.

First things first, I’ll give a go on these eccentric nuts (I had no idea they had this function, that’s awesome!)
I’ll then try to add a countermass, if the eccentric nuts don’t solve it.

The thing is, i’ve seen quite a lot of YT vids with guys using Neje modules, and they really don’t seem to have my problem, even on an OLM2 standard.
But then again, they don’t have to use a 3D-printer adapter that off-centers the whole thing…
See this one for exemple : https://youtu.be/ono1Wv2KaQE and the fitting is clearly seen at 04’40" into the video

I’ll let you know if the nuts correct things or not.
Thanks again for all your detailed answers, this is much appreciated

Your issue mostly is too you doing vectors
if you were doing side by side raster engraving, and added say 2.5/5% overscan you would have no problems at all

These deamons surface at times in some specific jobs.
Also remember, most people dont show you their trash bin. THe failed prints. (Which is naturally obvious, but something to consider)

Hmmm i’ll definately have to consider and learn this overscan option. Is there a Lightburn Tutorial video on this particular feature ?

As for your previous advises, see for yourself

In comparison to before

Still some minor wobblings but we’re getting there thanks to you !

1: It is recommended that you first check whether the mechanical connection between X axis and Y axis is firm, or whether there is a gap
2: Check the motor Settings of X-axis in the control system to see if the pulse number is inconsistent with that on the driver 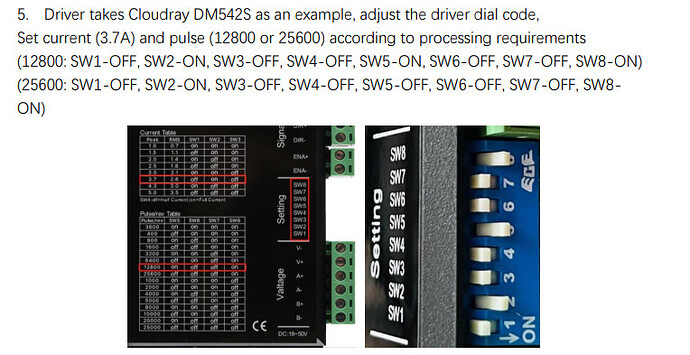 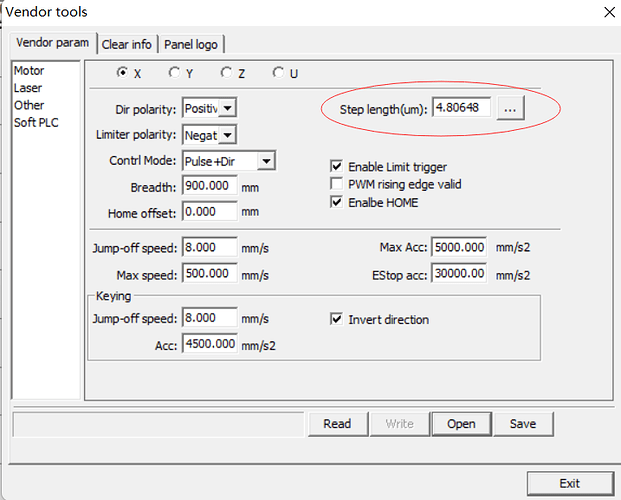 Thank you Anoxin, this looks really interresting !
However this is way above me ; I don’t even know to what these screens refer, nor where should I look to see this. Is it inside the stepper motor? So sorry for this noob question but well, it’s the first time I see this…

Anyway, you actually set me on solving my problem even further with your sentence ‘1: It is recommended that you first check whether the mechanical connection between X axis and Y axis is firm, or whether there is a gap’ : there was no gap at all BUT this made me think that I did not check if there were some eccentric nuts on the Y-axis wheels. Sure enough, there is. Sure enough, I had a tiny play there as well, so I gave them a 1/4 turn. And now there is no play in the Y-axis either.

Back to your suggestion in regards to the motor settings of X-axis in the control system, could you be so kind as to walk me through it ? I really don’t know a thing about this, and I guess that doing blind modifications would lead to catastrophic results…

The screenshot I gave you is the manufacturer setting in Rdworks, which is about the setting of motor drive. Many users have lines that are unstable, or farther than they need to be. It can be improved here

You got it dialed in quite nicely!

Yes now it is almost perfect ; i’ve designed an adapter plate to be cut in 3mm plywood so that the Neje Module isn’t so down anymore. The workplane has been raised and I simply use the module’s integrated vertical slide to set my focal length

It’s all thanks to you guys, you truly rock

@AnoxinLaser comment was for a controller/electronics I don’t think you have.

I think you should just raise the bed, so you can mount it directly where it’s supposed to be.

Not only can speed be an issue, but the acceleration values can be a problem, probably the root of it.

Would you mind sharing the plate? I’m in the same situation! Thanks!

Please note that you cannot cut the mounting plate adapter much thicker than 3mm, as the screws won’t get through enough for you to tighten the nuts. You may use 3mm MDF or 3mm Plywood.
Other things you might want to check, if you didn’t already :

Lastly, the speed and power are set for a single pass on the Neje A40640, for 3mm Birch Plywood. You might have to adjust according to your current laser module, material etc.