Yes, there are two ways:

I realize that this has nothing to do with Lightburn but is a topic for smoothie goods or hardware in general, but maybe there is information about it here!

Should you proceed according to these instructions or is there an easier way:
https://learn.watterott.com/de/silentstepstick/configurator/

The SKR V1.3 is connected to the small adapter board for the ribbon cable. Today I wanted to do the first test. Now it’s about the connection of the SKR with the laser PSU. In the meantime I have read a lot about how the board should be connected to the PSU in many forums and also here.
To be on the safe side, I also looked up the Smoothiewaredoku again and found that:

“Wiring
In order to control the power of the laser tube, the laser PSU reads a PWM signal as it’s input.
Please look at the datasheet for your PSU to know which connection that signal is wired to.
From the Smoothieboard, you need to connect :
One GND pin to the Ground connection on the PSU
One of Smoothie’s PWM pins to the PWM input on the PSU”

So they only connect one cable, namely the PWM signal with the PSU!
The PSU has two inputs:
L = switches the laser on and off
In = controls the power of the laser

If the PWM is clamped from the board to the In of the PSU, L would have to be constantly set to 0 (laser is always on) so that the power could be controlled from 0 to 100% and thus also activated or deactivated.

If the PWM from the board is clamped to the L of the PSU, the laser power must be set to a fixed value with a potentiometer connected to in, so you can no longer change the power via the software, right?

Or is it meant that with the PWM from the board you can switch the L from the PSU on and off so quickly that the power can then be changed?

I believe this is the most frequently asked and discussed question when upgrading!

I have now installed the SKR 1.3 and carried out the first test.
With PWM from the board just like that on L of the PSU it definitely doesn’t work as desired! Maybe there are different PSUs, but with a power supply unit that has L and IN it doesn’t work that way!
The cutting works, but as soon as you can fill an area, you notice that the tube starts to fire on one side with a certain time lag and then something is missing. As a test object I drew a small rectangle in Lightburn and then cut it or had it filled in. The faster the X-axis is moved, the smaller the filled area!
I am now converting it to an output for L and a PWM output to IN of the PSU.
Now I need a simple circuit to connect a PWM signal 0 to 5V from the SKR V1.3 to the PSU.
Is there no PWM pin that delivers 5V? If not, I had already considered pulling the fan output to 5V. If the fan output then switches to GND, you have the range between 0 and 5V without an additional board!

Edit: It just occurred to me that you don’t have a 5V! 3.3V are sufficient because you never need 100% with the CO2 laser. 3.3V are over 60% of 5V and I am currently working with 30% = 12mA. The 3.3V signal should be able to be connected directly to the IN input of the PSU without an additional board! Or am I making a mistake?

Your original post told you - gnd to psu gnd, pwm output from smoothie to IN

You are significantly overthinking/over-complicating this.

as soon as you can fill an area, you notice that the tube starts to fire on one side with a certain time lag and then something is missing. As a test object I drew a small rectangle in Lightburn and then cut it or had it filled in. The faster the X-axis is moved, the smaller the filled area!

I can’t visual your scan issue cause you did not share a picture but have you tried overscanning?
https://lightburnsoftware.github.io/NewDocs/CutSettings-Fill.html#overscanning 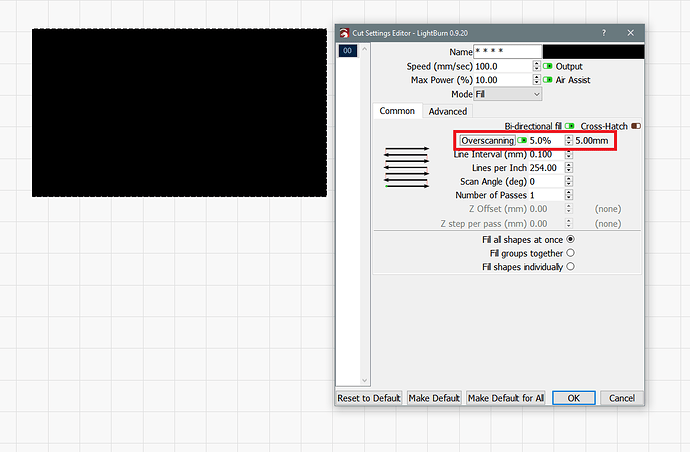 My laser is now working as expected!
I’m in the process of engraving faces in plywood which works just fine! I laid three cables from the SKR V1.3:
GND board to GND PSU
Fire Board to L PSU
PWM board to IN PSU
By the way, you don’t need a conversion from 3.3Board to 5V PSU because you shouldn’t get 100% power from the tube anyway.
If I put 60% power in Lightburn then I have about 12mA on the current display. Simply connecting the PWM board to the L PSU is basically possible, but you still have to manually set the respective good maximum current on the potentiometer. The setting via PWM is then not very finely feasible compared to wiring now with both connections L and IN to the board.
Also PWM board to IN PSU and GND board to gnd PSU cannot work because the laser does not fire as long as L is on +! In order for the laser to fire, L must be placed on gnd. You could of course connect L PSU to GND, but then the laser is always sharp and you can no longer trigger it with the test button!

That way you can never accidentally overdrive your tube

In the next step I will test Marlin as firmware. Smoothie does not support TMC2208 via UART! This means that the currents, the step resolution and so on cannot be changed on the board. The 12864 display worked immediately with Marlin, but not so far with Smoothie. There’s a lot more support for marlin than for smoothie. I’ve also talked to the developer of Smoothie. He seems to be very inflexible and not very open to additional options that are not available on his own board! In my previous tests with Smoothieware, I also had an interruption on an engraving project. I can’t say whether that was due to the firmware or something else, but the interruption definitely occurred.

C’mon man, I run SKR1.3, TMC2208’s, BTT’s TFT35 and Smoothie Cluster.
My Advice for you is to Think twice before switching to Marlin. you might lose more than you will gain. Who needs UART if you can set things once and forget about them? I edit my smoothie’s config file directly from Lighburn’s console. easy.

Since I switched to the Cluster flavor and updated to 0.9.20, all my engraving issues went away. no more connection issues, no more stuttering before rasterizing starts. i might get those at a later stage (you can’t trust machines too much) but so far - so good.

I’ve already got myself the TFT35 and it probably works without any problems with smoothie.
“Who needs UART if you can set things once and forget about them?”
You may be right!

“I edit my smoothie’s config file directly from Lighburn’s console. Easy.”
That sounds interesting! How does it work?

“Since I switched to the cluster flavor and updated to 0.9.20,”
I can’t say which version I’m actually using.

Where did you get yours from, or maybe you can upload them?
Your config.txt would also be interesting
You have probably not set the jumpers on the board to UART but for manual setting?
You have probably also switched the TFT to laser functions?

Sorry, that was just a misunderstanding! Of course I use version 0.9.20 at Lightburn!
Which Smoothie firmware are you using?

I just tested it!
Thank you for the tip with reading and writing settings on the config.txt!
That is really very elegant!
Maybe you can tell me something about optimizing the surface of the TFT35.

I see you know your way around, Great

Are you able to raster at 250mms/254 without issues? are you using a good quality USB cable? you should. Have you installed the Cluster flavor of Smoothiware and enabled Cluster mode in LightBurn? I am running this flavor:


What do you mean by Optimizing TFT35 surface? i did change few things like the MOVE menu to reflex the correct Y movement and also recompiled the firmware with my move commands since the default code was lasing when my laser head was moving (as we discussed, G1 vs G0) - so i added the S0 flag to stop this from happening.

Many thanks!
I have already downloaded the firmware that I have been using up to now from the Cohesion3D homepage, in Lightburn Cluster … is activated and yesterday I tested 300dpi at 250mm / s without problems. I can go higher today. Then I’m probably up to date.
How can you change commands that are triggered by the buttons?

How can you change commands that are triggered by the buttons?

You just edit and recompile the code which you can download from btt github.
Here’s an example for the MOVE menu. this is not my laser code so you wont find S0 here.

Hello Squid, could you help us with jumper configuration, (picture, link or diagram) if you said you use the TMC2208 in standalone mode?

On Bigtreetech manual (https://github.com/bigtreetech/BIGTREETECH-SKR-V1.3/blob/master/BTT%20SKR%20V1.4/BTT%20SKR%20V1.4%20Instruction%20Manual.pdf) I could only find configuration for other drivers, for TMC2208 they only specify how to use them in UART mode.

I know i have to desolder the 3 jumpers pads from underneath (correct me if i’m wrong) but from there i’m lost.

I should specify i use SKR 1.4 Turbo.

Thank you for all your help.

I never soldered nor desoldered anything on these 2208’s. just used the jumpers to set microstepping.
this was a year ago. can’t remember if i’m on 8 or 16 microstepping which means either all jumpers are out or MS1 and MS2 are pulled up (installed). 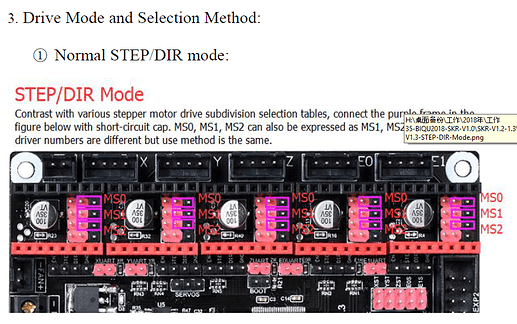 Can someone tell me where to find the circuit diagram for a Smoothieboard?

The TFT35 is attached.
The problem now is that it says no printer is connected. Can you change that or is it normal? Now I can only move the X and Y axes and nothing more. If the connection to the board could be completely established, a lot more would be possible. 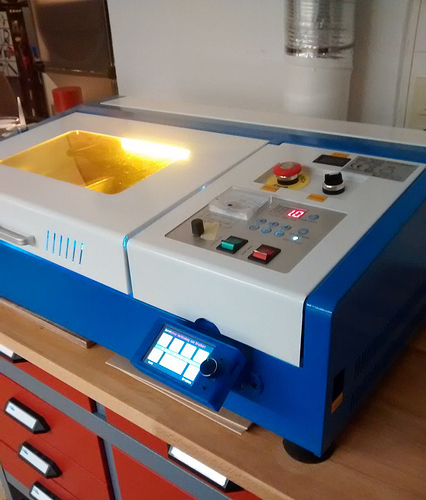 Hi Squid,
does your TFT35 connect to the SKR V1.3 or do you also get the information “No connection to the printer”?