Finally finished with this project, took way longer than initially thought it would take…!

Used an ESP32 Arduino to simulate a Bluetooth keyboard and send commands to LightBurn. A flat LI-Po battery provides the energy and its wirelessly rechargeable, I use the same charger as my iPhone for it. Designed and 3D printed everything. It has a couple of strong magnets so it can stick to the laser frame anywhere.

It turns itself off after 45secs and to power it back on you just touch simultaneously one of the metal screws on each side, then it reconnects to the PC.

The LB 13.01 update and its hotkey editor was a godsend (Jasonsend?

Here are some photos of the progress and a small video of the framing and engraving of one of the keys.

There is a but, the arrow keys are more a miss than a hit, even with the PC connected keyboard I cannot make the head move.

Readed a lot of threads in the forum and cannot make them work, checked that setting in control panel to use the keyboard as a mouse and none, the head doesn’t move.

The only way to move it is from the Move window controls, if these were addressable via the hotkey manager that could be a solution (dunno if they are, will check this).

My laser is an Aeon Mira 7, and now I’m using its built in wifi connection (was using LB bridge a month ago and before) which work flawlessly otherwise. 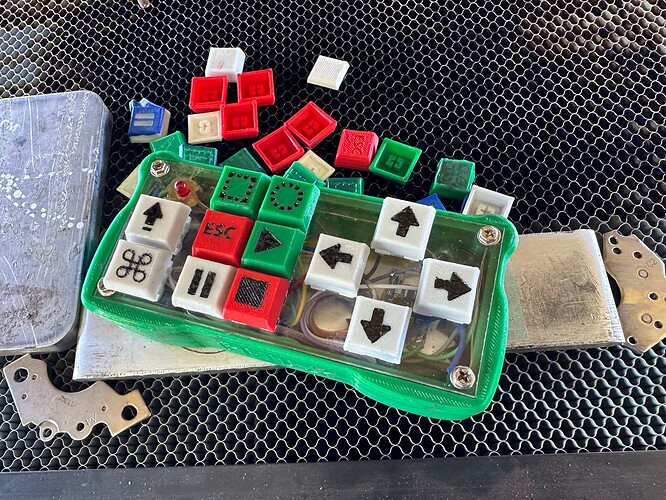 There is a but, the arrow keys are more a miss than a hit, even with the PC connected keyboard I cannot make the head move.

What commands are you sending now to attempt this?

I’m using the numeric keypad arrow keys with the numlock activated, per the docs the head should move, but it doesn’t

That would normally work. I think you may need to have focus on the workspace for the keys to work in case you’re not doing that.

You may want to try these key combos. I don’t believe these require focus on the workspace:
left, right - ctrl+alt+[ and ctrl+alt+]
down, up - ctrl+shift+[ and ctrl+shift+]

is this what you mean?

If not correct please clarify, I can try these tomorrow at the shop, if they work its just a matter of replacing the old ones and sending these new keystrokes. Thanks

No. For example on how to read my list… for left you would simultaneously press the ctrl, alt, and left square bracket ‘[’ key. Then follow that convention for the other keys.

got it, tomorrow I try. Thanks!

BUT, this misses the micro or macro stepping option that is provided when you use the arrows and shift or control keys

You may want to try reverting back to the numpad keys but making sure you select focus on the workspace before attempting. That could get you the modifier keys to work.

Now that you mention the focus on the workspace I see what the problem is, when you are framing the focus is on the Laser tab, and if there, the arrow keys dont work, I don’t understand why since its part of the workflow:

Draw a circle in the workspace > when happy with its size and location > frame it and BAM arrow keys no longer work and their function now is to move between buttons in the laser window in a very inconsistent way, in windows I usually move between adjacent buttons with the TAB key.

Maybe the DEVS can shed some light about this behaviour.

In the meantime, Im thinking about how to hack the actual behaviour by doing some operation to return the focus to the workspace from an addressable key combination in the hotkey editor.

The best solution so far is to press the save the work, this puts the focus back in the worspace and I can move with the numpad arrows, I hope there is a better option since you don’t always want to save a work in progress, I’m still looking.

Well a hack if it works, its a good hack. I modified the code to issue a CTRL-S wait 100 miliseconds and then issue a ESC and it puts the focus back in the workspace thus allowing me to use the arrows after framing.You have to pay attention to the screen to see the save screen, it dissapears very fast.
Less than 100 milisecs didn’t work

If any other key is pressed, when I press again any arrow it re issues the above and the arrows keep working.

Im sure this will be easier sooner than later

Nice job, but I’m curious why you didn’t just follow this helpful guide - Numpad mask to control Ruida.
I did this some 2 years ago and it was simple and low cost. The only buttons I use on my remote are the Frame and Fire. I don’t use the arrow keys on my remote as the Ruida keys work just fine.

Any BT keyboard and a key mapping software would do if you want to go that route, its the simplest!

My project doesn’t need any additional software, it works directly with LB and I can customize it in firmware without limits. For example, if you press CTRL-SHIFT-STOP keys it goes into deep sleep to save on battery.

And most numeric keypads don’t have shift and control keys, which allows you to modify the arrow behaviour.

But the most important part is the challenge of the whole project from software to physical parts. I love this the most.

We have the RD-ACS Ruida Remote Control if anyone’s interested.

I have it in my cell, but the ruida remote interacts with the laser, not lightburn. You can’t rubberband frame for example. And for irregular shapes like I usually cut, thats a must.

here is an alternative without the headaches! $150.00 give or take on your shipping
and tax… read my previous post, the ruida remotes only interacts with the laser, not lightburn.

Not sure why yours does not, all major fuctions on the remote reflect on lightburn as I use them, again kudos to you for building your own, not sure what all other fuctions you would need besides setting origin, joging X,Y , AND Z fast or slow, cancel job reset machine pulse fire the laser…ETC! …I guess to each one his own! Im too busy cutting product and never had the need for any other functions
on on my remote on a 130w 35x55 laser…

Also frames the job and homes
…not sure what else you could be missing, have been using a laser for over 6 years with lightburn and i have yet needed any fuctions other than the aformentioned. Please teach me what it is that Im mussing here? I have seeing all your posts on this topic. Unless I missed something…