Hello guys,
I’m in need of a bit of help.
I have a Neje Master 2S with a N40630 module and I’ve focused the laser to the point that at 0.30% power it starts to mark a black surface with the tiniest dot possible.
I’ve tried to cut 3mm plywood and MDF with the recommended settings 120mm/min at 100% and it takes me about 12-15 passes to cut through nowhere near the 1 pass stated!

I’ve tried to cut with the focal point of the surface of material, on the middle and at the bottom and the result are all the same.

Can anyone help me or give me some insight or maybe I have a faulty module?

What is the value of $30 in Machine Settings? If it matches 1000 then you’re likely getting the most out of the laser module that it’s capable of giving.

That doesn’t answer if your laser module is outputting it’s specified capacity. You would need a way of actually measuring the light output to determine that. There are tools for that. I have not seen an easy or budget friendly way of testing this.

Yeah the $30 is set to 1000 and I’ve matched it on LightBurn. I’m better off getting another superior module than buying a tool to measure the output power of the laser…

I’ve since reinstalled all drivers, made sure the laser was running grbl1.1f, made a clean LightBurn install along with new device setup with all stock values (except for bed size) and seems to be a bit better.

Now I think I have a second problem idk if the picture will show it well but when laser is firing I have 2 small reflexes on the sides of the main dot.
And they are more visible if more power is applied

I’ve since reinstalled all drivers, made sure the laser was running grbl1.1f, made a clean LightBurn install along with new device setup with all stock values (except for bed size) and seems to be a bit better.

The only thing that might have made a difference in this is the firmware. But unless your previous one was fundamentally broken in some way I wouldn’t have expected any appreciable change. How much better are you seeing?

I’m not following what you mean by this. Are you saying instead of all light converging on a single dot that you have some light escaping to the sides of the dot? If so, I don’t think that’s entirely uncommon. But make sure the lens is clean and undamaged. Also, check that it’s mounted properly onto the laser module and that it’s not loose.

Yeah I’ve cleaned the lens with isopropyl alcohol and checked it to see if no cotton got left behind.
Also I did a power/speed test and this is what came out of it! 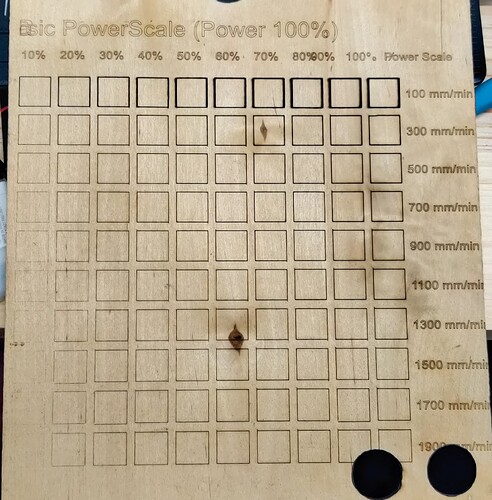 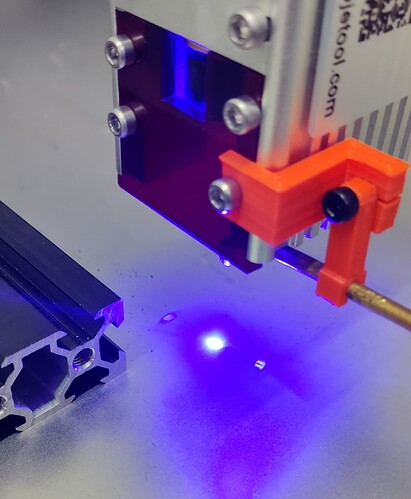 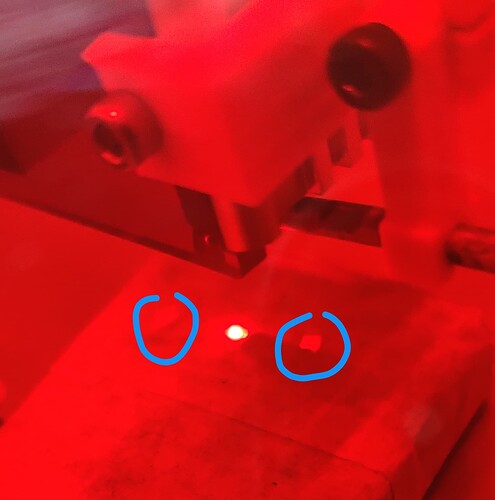 Interesting. I haven’t seen anything like that. The shape is very geometric so perhaps it’s a reflection from somewhere else and not coming directly from the lens.

Perhaps someone else with your exact module can comment if they’ve seen the same thing.

My plans are passing through saving and getting a A40640 with PCB for external power supply but it’s around 250€ I can’t afford atm… I bet it’s the spring between the focus lens and the diode lens that is reflecting and projecting the light… tomorrow I’ll get rid of the spring to check it!

Maybe the 3mm MDF I have here is wet or something?

Did you check the lens/focusing for some issue to the twin dots?

I’ve seen this and it’s generally an object in the light path, rarely a cracked lens.

The Neje wiki doesn’t specify the dot size of this lasers N version, but I think the A40630 version of it is the same laser… it’s specified as square … some are rectangular.

The N40630 was rectangular shaped from what I remember from when I first bought it, now they have a updated version with square spot.

I’ve disassembled the lenses four or five times now trying to figure out what may cause this and cleaned them every time the pattern is always the same, i have even removed the spring inside to see if that was causing the reflex to no avail

Can you look at it without the lens in place?

If the beam looks ok from the laser itself, then inspect the lens for any aberrations.

Ensure the lens is square in the tube…

Not sure what to suggest at this point. I have one of those and have never taken the lens assembly apart. I also don’t have two ‘orbital’ spots…

I assume there is no aberration you can see in the lens from your comment. It has to be the tube/lens assembly since it works without it…

Maybe this MDF is too dense to cut, I think this is what they use on bottoms of drawers, I’ll have to get myself some birch wood plywood and try it because the balsa 14mm didn’t have any hard time cutting in 8 passes at 300mm/min this one with 8 passes at 120mm/min doesn’t go trought

The problem with mdf, is usually the glue… It can be in blobs or just not want to be lased.

I’ve had a few projects I had to recut parts from the mdf glue alone.

I’ve even set the focus on the surface at 17mm like they suggest spot on and then lowered it 1.5mm to match the center of the piece to cut and to no avail, maybe I’ll order a spare lenses it’s like 9$