I currently have an Ortur Laser Master 2 Pro S2 SF.
Pretty happy with it, I can do most of what I need, I’ve built a small enclosure for it.

But I recently wanted to cut something else than poplar plywood, and I wanted to cut and engrave 4mm birch plywood. My first tries were not very conclusive, even with a lot of passes, I did not manage to cut it without burning it too much.

I came accross the Neje A40640, with its optical power of 10w, which would be the double of what I currently have. I wanted to have some feedback on it. Is there some people who got it? Does it really have twice the power of a “standard” 5w laser?

Or do you have another one that would be especially recommended? I don’t have the space(yet) for a CO2 laser.

Go to NEJE.shop website, Products->Laser Modules, click on the A40640 module and NEJE provides a link to a youtube review of the module and why it’s pretty much the best there is for a diode laser.

Yeah, but I don’t know how much they might have been part of an operation.

Well, to be totally honest, I did order one, received it, had performances worse than my ortur laser, and after a LOT of discussion/troubleshooting with the customer support, they just ask to return it and provided a refund. I was thinking the module was defect, they were not sure about it.

Now I’ve the option to get a replacement, but I’m not sure if I my module was defect or if it’s globally what should be expected. I was unable to cut 4mm poplar plywood at 200mm/min while they recommend to use 360mm/min for this(at 100%)

I don’t know if you’ve made a decision yet, but I’ve got an Neje A40640 and been very happy with it. 3d printed an air assist nozzle for it and regularly cut good quality 4mm ply at 240 speed, 75% power and 4 passes. I don’t generally run my lasers at 100% power. I have cut 3/8 pine with mine, so it will definitely cut some fairly thick wood. Also, as Stupsi mentioned, “good quality” plywood is pretty important. Occasionally I’ll run across a piece of 3mm that just refuses to cut and when I break it apart it will have some strange inclusion or garbage on the inside that laughs at the laser.

I would expect the A40640 being able to cut the same thickness in ~half the time or passes since it 2x5W laser diode.

Am I missing something? I mean, the reference material of the ortur was a bit off, but not as much as the Neje.

Fair enough, my frame of reference is a no-name “5W” laser that would struggle with 3mm plywood and any attempt at thicker wood just resulted in charcoal along the edges. No way at all would the old one ever even think about cutting anything 3/8 inch thick.
One thing I forgot to mention is that I’d say over 75% of the time it cuts all the way through the 4mm in three passes, but I run 4 since I’m not in a hurry and I don’t like fighting with little delicate pieces of wood that want to break off and cause me to have to re-run a piece. To my mind it takes less time to run one more pass than to break something trying to get it apart and have to start over.
It’s entirely possible that the NEJE should do better, but I don’t have enough experience with other lasers to really know one way or the other. As far as compared to my old laser, the NEJE is definitely far more powerful. My (uneducated) guess would be that the NEJE could easily be double or more the power of my old supposedly 5W laser, but again I have a very limited frame of reference.

You may look into the Sculpfun S9 as well. I got that laser just a few days ago and I have to be honest, if I had bought that one first then I would probably not have bought the NEJE. The S9 is very impressive for a 5W laser and is usually about $100 cheaper.

Good luck with your decision,
Mike

So, here I was happily using my 40640 and along comes this thread and makes me start questioning things…

Turns out I had a couple of issues going on.

Apparently I was pretty badly out of focus, so got that sorted out.

Also, the plywood I am using is not actually 4mm, but ~4.6mm. Not a huge difference, but relevant I believe. 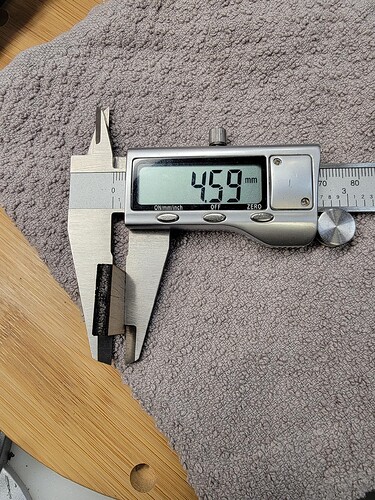 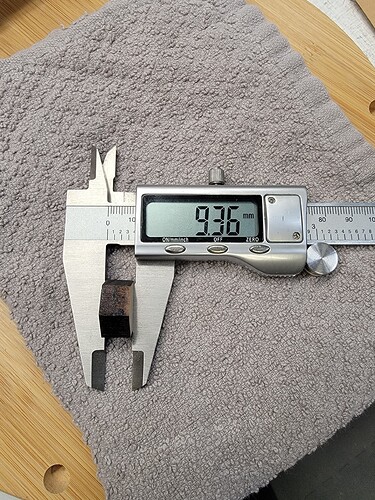 Anyhow, I hope this helps you or maybe someone else that runs across this thread.

That’s already much better! Glad for you!
I’m curious, what was your process to adjust the focus?

Curious as well, also what focal length did you end up with ?

On the focus issue, in this image they show the focus distance to be 22mm, so I 3d printed a 22mm block and that is what I have been using up to this point. I assumed (incorrectly, which is pretty common for assumptions…) that the focus was fixed and 22mm was set. 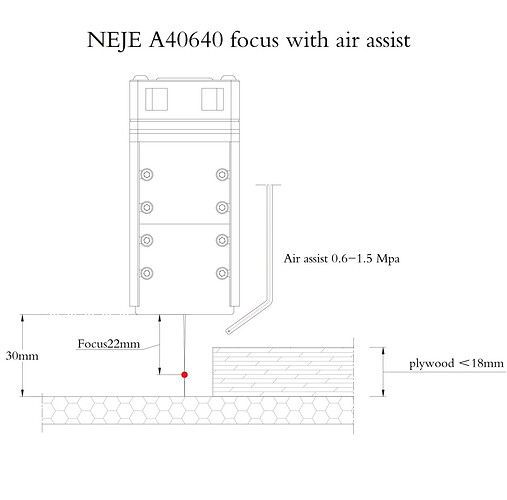 However, in this video they mention a 17mm focus: 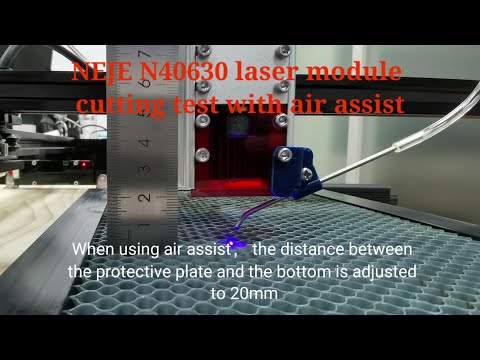 And finally in this chart, they show the laser dot as focusable: 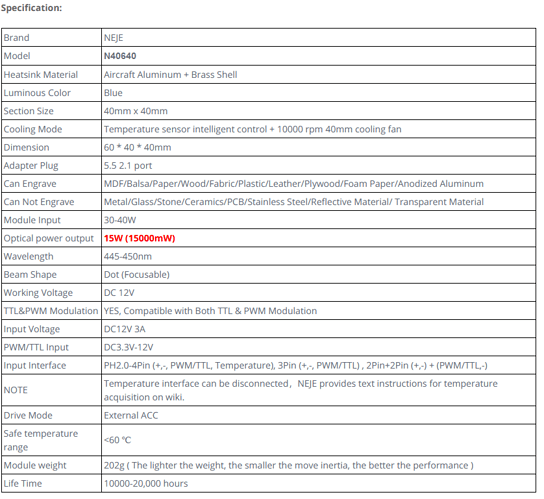 Since at the time I only had my old and much less powerful laser to compare to, I didn’t question much but from your (jaytonic) comments earlier I went and did a ramp test and turns out that my focus should have been more like 15mm to get the smallest dot size.

The lens can be screwed in and out, so I screwed that one way or the other (sorry, can’t remember 100% if it had to be screwed in or out), but now the focus is really at 22mm and it definitely works better.

Thanks for the info

Okay good! I was wondering if you did found a “less fastidious” way of focusing than mine ;).
I must admit that the fact the lense can be focused is quite hidden and a lot of people don’t know it.

By the way, now that you know that your focus is at 22mm, they also recommend that the focus point(at 22mm) ends at the middle of your material. Meaning that if you cut something that is 9mm thick, the distance between your reference point and the material should not be 22mm, but 22mm - (9/2)mm => 17.5mm.

Ok, I tried to reply to this about an hour ago, but I apparently got some kind of “Time-Out” for posting too much and had to wait before I could get back to you. Oops, that didn’t take long to get into trouble…

You are 100% right on the focus, unless this conversation happened I would have continued on without looking any more into it and likely never realized that the focus was adjustable. Makes me wonder how many other people aren’t getting all the efficiency out of this laser that it is capable of.

By the way, now that you know that your focus is at 22mm, they also recommend that the focus point(at 22mm) ends at the middle of your material. Meaning that if you cut something that is 9mm thick, the distance between your reference point and the material should not be 22mm, but 22mm - (9/2)mm => 17.5mm.

Since this is also a CNC machine and I have Z-axis control I have Lightburn drop the Z-Axis by whatever is appropriate to keep my initial focus all the way through the cut.

As example, a 10mm deep cut in 3 passes I set 22mm to the surface and then lower Z by 3mm each pass. This seems to work ok so far.

But yes, looking at that first picture they also show the focus point to be the center of that board, thanks for pointing that out. So many details that seem small but can have drastic effects on the outcome.

So cool! I would be interested to see the CNC side of your setup too. You also use lightburn for the CNC part?

The machine itself came from the folks at v1engineering (https://www.v1engineering.com/). The machine is their MPCNC (Mostly Printed CNC)they provide files that can be 3d printed and along with some very standard bearings, electrical conduit and regular old bolts and nuts plus the expected steppers, wire, etc. you can build pretty much any size CNC machine you want. I’ve modified the mounts that they provide and printed custom ones to accommodate a dremel tool, my original laser, and now the NEJE laser. I’m looking to upgrade the “spindle” to something a little more worthy, but for now it’s actually working better than I expected. I’ve milled some wood, some MDF, and some acrylic successfully with it. I want to try aluminum, but haven’t had an excuse/opportunity yet.

I haven’t tried using Lightburn for the CNC work although as I get more experience with it I do think there might be some possibility there. Currently I’m using Fusion 360, CamBam, and Universal G-Code sender for the CNC work that I have done so far.