New user looking for suggestions for a K40 Ramps 1.4 setup

Greetings all. I am a brand new user to Lightburn with a K40 ramps 1.4 combo.

First off, as I am sure you would all agree, Lightburn is a terrific bit of software and the training and support are really amazing.

So, how am I getting on?

A bit of a roller coaster really. Been banging away for several months now still trying to put together a successful configuration.

I still haven’t nailed down a proper hardware setup/pin configuration either.

So, any help or ideas to help with a few problems would be very much appreciated:

Is there a preferred firmware for ramps 1.4?

I have tried Marlin 2.0, 1.9 and MarlinKimbra. All with mixed success.

Am I spinning my wheels trying to get good consistent results with an Arduino Ramps 1.4 setup or do I need to find the funds for a Smoothieboard or Cohesion setup or something else I haven’t considered?

I am a retired/disabled ex-coder with some skills but not the sharpest tool in the shed so thanks again in advance for any help y’all can offer.

The first one means that vector marking (getting a consistent line on a surface) is tricky because as the controller slows for corners it doesn’t lower the power, so you get dark spots at start / end points and sharp points in your shapes. This isn’t an issue if you’re cutting or doing filled engraving where the system can use overscan and ramp up to speed outside of the cut.

The 2nd and 3rd points limit the complexity of code that can be processed. Filled vectors work well because the gcode isn’t very heavy, but for images, where the dot density is really high, you end up with 3 or 4 gcode instructions per dot, roughly, and the throughput of the controller and the serial connection will limit you.

If you were using a diode where speed isn’t high anyway, or you primarily want cutting or vector scanning, you’ll get by with the ramps combo. If you want to do surface marking, an 8-bit controller running Grbl 1.1f would be a better choice, and if you want to go fast, a Smoothieboard running Grbl-LPC is hard to beat.

You say you’re having trouble getting consistent results, but that’s pretty vague - What kinds of problems are you having?

Another one to look at is G2Core running on a 32-bit Arduino with a CNC shield.

The same core as TinyG with all the smooth acceleration and forward planning, and it is dead fast on a 32-bit processor.

I use Smoothie and MKS boards on my K40s - just keep a couple using the stock controller for use by people that want to use them for big engravings.

As most of mine are used for cutting with the occasional engraving flourish, Smoothieware works fine.

I have a TinyG and a couple of G2Core processors on my 3 diode lasers. They work great, but again, I’m not much of one for engraving so I’m not sure how they would stand up to a fine dpi job. The G2/TinyG machines are connected via OrangePi/Octoprint.

I’ve played with GRBL, and GRBL-LPC, but still not convinced they are as good as Smoothie/G2

Wow! I never expected such a fast response.
I am doing mostly ‘lines n’ fills’ so far.
I will put up some images and details on the glitches but for now, could your recommend a version of Marlin that works best with Lightburn? (ie. 1.9, 2.0 or MarlinKimbra).
Also, could you point me in a good direction for a guide for configuring pins/steps etc. ( I know there is a ton of stuff out there but the problem is there seems to be TOO much and I get bogged down trying to wrap my head around all the configs.)
Again, thanks so much for your help and I don’t pretend to be a genius with this stuff. Just an old guy who is totally hooking on ‘light burning’.

I’ve tested with Marlin 1.9, I believe, and other users have reported using 2.0 without issues, but I’ll warn you that I’m not strong with Marlin and much of the Marlin support in LightBurn is a direct result of user suggestions.

Most people use the first fan output for the PWM of the laser, though that can be changed in the device options in LightBurn if you need to use a different PWM index, and the baud rate is configurable as well (250,000 is favored because it’s nicely divisible by the clock rate, where 230,400 is not).

If you find the configuration daunting, I’m not going to be much help there as Marlin is not my forte - I have a good amount of experience with Grbl and Smoothieware (even having delved into the code for both of those), but no real experience with Marlin.

Request for help with Marlin pops up quite frequently. Do a quick search for Marlin and you will see what other people have had issues with and how they have solved them. An Arduino with a stepper board can be had quite cheaply, but it does not have a display like the 1.4 board.

Thanks for the help.
Which of the suggestions you made is the most economical and do you have a favorite supplier for the parts?

I use banggood.com for most of my purchases.

Thanks again Oz.
Above all I am looking for stability.
I have successfully used the first fan output to pin 44 and hardwired the off/on.
Thanks for the tip on baud rates.
No worries on not being too up on Marlin just thank you for being the super genius you are to put together Lightburn! Not to mention being such a great person to help us all out with all our problems.

Do you know of a way to run GRBL on an Arduino/Mega 2560 combo?
I haven’t had any success with that at all and I am more than happy to give up the LCD if I can get some consistency.

Finally Oz, if you had to pick for both economics and performance, is Smoothieware the way you would go and do you know of a good supplier that ships to Canada?

Not surprised. I spend most of my dollars at Aliexpress these days too.

I am actually using that combo now with LCD which I enjoy but could live without.
Just can’t seem to get it all sorted out yet. There always seems to be one link in the chain that is never addressed or doesn’t work as described in “instructables” like pins 5/6 not actually outputing anything or the connections for my K40 not as shown on Laser DIY.
Oh well, I will never quit till I get this sorted.

BTW Oz, is there a section of the Lightburn support specifically for Marlin issues?

An MKS SBase 1.3 running grbl-lpc with TFT touch screen is about us$65 delivered.

It would be my pick for a replacement controller.

Thanks again Bonjour. I will give it a real serious look.
Favorite supplier for this?

Thanks again Oz.
Above all I am looking for stability.
I have successfully used the first fan output to pin 44 and hardwired the off/on.
Thanks for the tip on baud rates.
No worries on not being too up on Marlin just thank you for being the super genius you are to put together Lightburn! Not to mention being such a great person to help us all out with all our problems.

Do you know of a way to run GRBL on an Arduino/Mega 2560 combo?
I haven’t had any success with that at all and I am more than happy to give up the LCD if I can get some consistency.

Finally Oz, if you had to pick for both economics and performance, is Smoothieware the way you would go and do you know of a good supplier that ships to Canada?

I wouldn’t bother. Other than the extra memory, a mega gives you nothing. 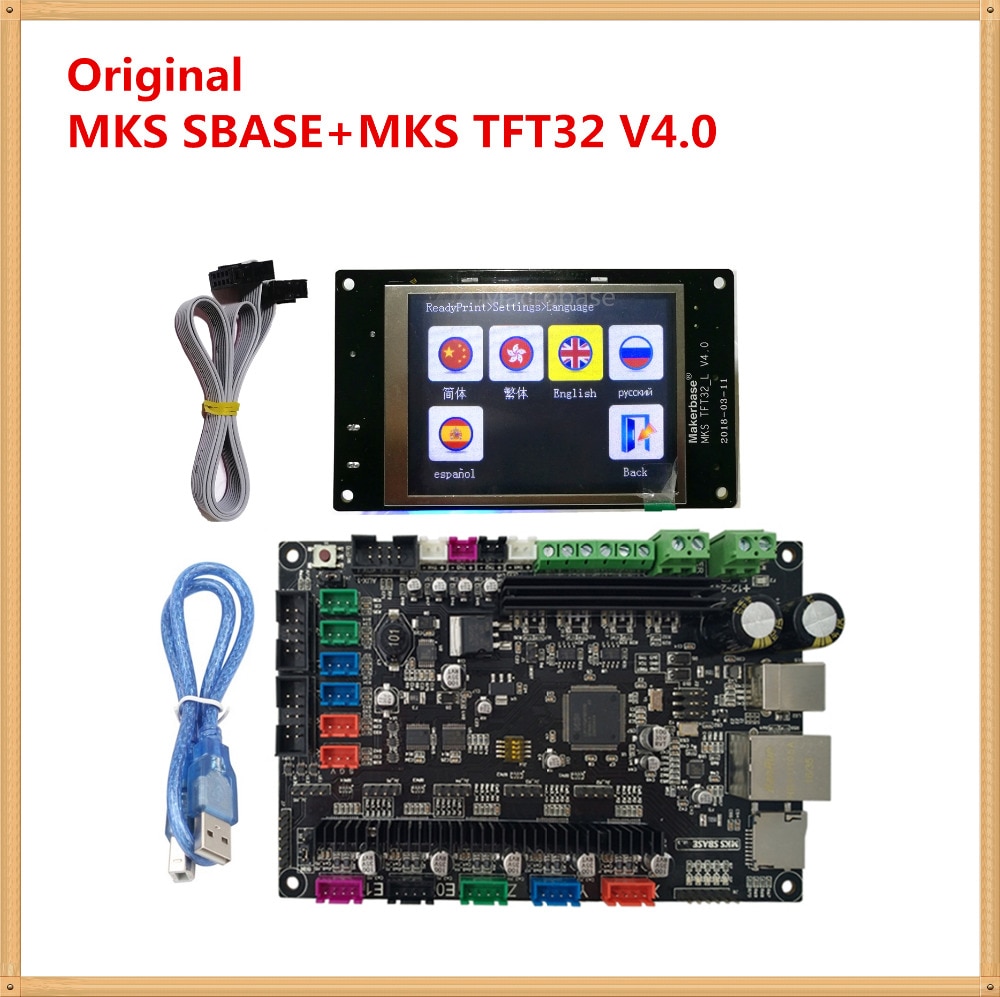 Another option that is sub $100 is the MiniGerbil from awesome.tech It is a 32 bit controller running GRBL that has all the correct connectors on it for a K40 and is a simple 5 - 10 minute install. No need to wire up any new limit switches or mess with the wiring in any way. It is available at https://awesome.tech/product/mini-gerbil-2-axis-controller-for-k40-laser-cutter/

Also , if you are thinking of expanding your K40 in the future with a powered Z bed and rotary attachment, the Cohesion 3D laserboard is also a drop in replacement for the K40. It can control the X, Y and Z axis as well as a dedicated rotary attachment. It is available at cohesion3d.com It runs either smoothieware, or GRBL-LPC, your choice

The MKS Sbase board is an illegal clone of the smoothieboard, and does not adhere to the open source licensing agreement of the smoothieboard. There is virtually no support for the board, but both the MiniGerbil and Cohesion 3D laserboard have excellent support forums that the manufacturers run. LightBurn works very well with either controller. If you have any questions, feel free to ask.

Above all I am looking for stability.

Stability and cheapest do not go together. To take full advantage of your CO2 Laser you really should have a 32 bit board.

The 2 drop in boards that Anthony suggests are 32 bit.

C3D also funded my my investigation into improving Smoothieware raster speeds (3x speedup, currently being tested) and hosts a support forum for their hardware.

The MKS hardware might be very similar, but the C3D LaserBoard was designed to be a drop in replacement for the Nano, with all the same connectors and bolt pattern. For me, the time saved not having to snip/strip/trace wires and rewrite the ribbon connector for the endstops was worth the price difference.

I haven’t played with G2 / TiinyG enough yet. I don’t believe they do ramped power output for lasers either, but I couldn’t say that for sure.

Thanks GAM.
The MiniGerbil was intriguing so it is good to hear it is an option.
Wow…5 - 10 minute install. I told my wife my Ramps combo would take three days to a week. Three months later I am still banging my head against the wall on it.
I already have build my powered Z bed from scratch and am happy with the results so it will be nice to tie it into a board.
Thanks for the MKS Sbase illegal info. I will pass on that. As I am in this for the long haul I want a solid, feel good, foundation. Thanks again for the input.