I recently got a Omtech 60w AF and it is acting funky. Tonight, I was testing it out and it was running decently, and about 60% in it starts running continuously creating the big black line you see in the picture. It’s done that every time I have tested it (3 times). Now when I run the file it runs continuously from the start, and even when I hit frame, the laser fires continuously as well. Any help is GREATLY appreciated. I researched and couldn’t find any information. Thanks! 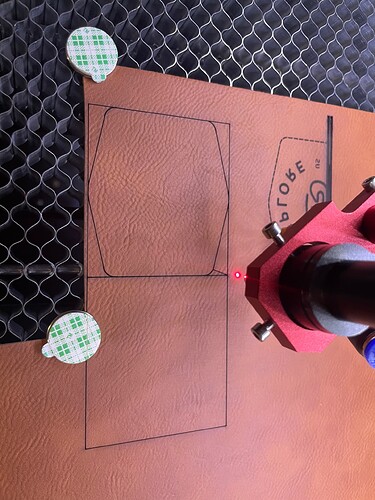 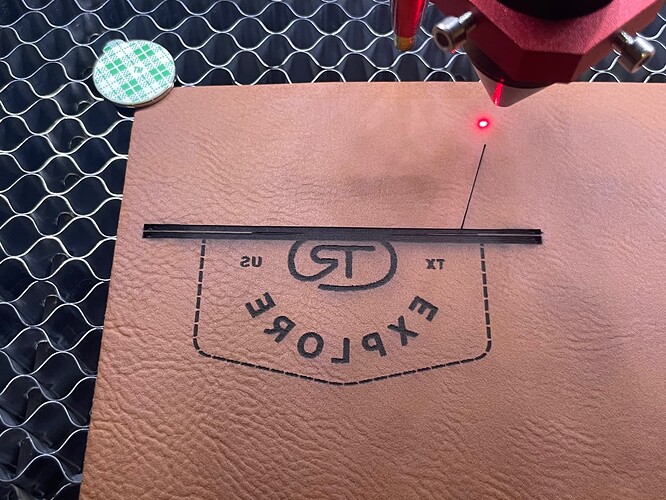 The lps on these are controlled by two signals.

The pwm is feed to the IN of the lps and controls the pulse rate (percentage power) and the L input ‘enables’ the laser to fire at the pwm percentage.

The pwm is continuous from my Ruida for the running layer and only L ‘fires’ the laser.

I would check the voltage level at the L input. If the laser is supposed to move, but it’s moving and lasing… L should not be low unless it’s supposed to lase.

I know you know, but I’m not clear…

If I’m understanding you correctly, it’s lasing as soon as you press ‘start’?

The JYE power supply on my OMTech 60 W (red/black) laser failed the same way a couple of weeks ago, with the first symptom being continuous firing while framing: 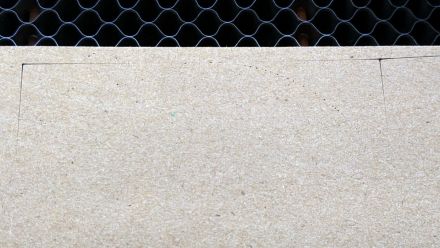 I described the symptoms in some detail and OMT sent an anonymous replacement power supply in a few days: 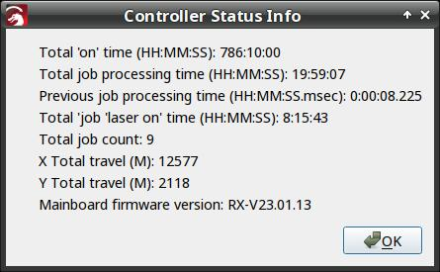 Failed after firing the laser for a little over eight hours

I think it’s also defective, but in a more subtle way: 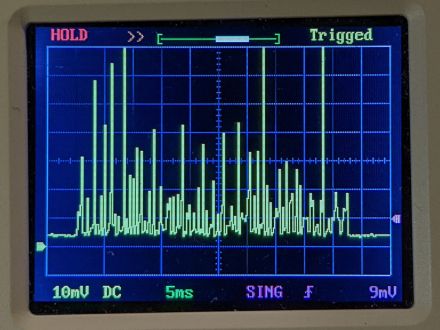 So I bought a Cloudray power supply and will compare its output with the anonymous supply. If they’re the same, then crappy low-PWM regulation is just how these things work. If they’re different, then I must convince OMTech their supplier has a QC issue.

Anyhow, I think a failed supply is more likely than a failed controller.

If you measure the L input to the lps, it probably remained high (off), indicating the lps.

I’d like to know how he got those scope photos, along with where and what the trigger is. Mine are all over the place.

I haven’t read it in detail, out in the hot garage watching a job run,

how he got those scope photos

They’re from an ancient (and cranky) Tek AM503/A6302 Hall effect current probe, which is absolutely PFM for non-contact DC to 50 MHz current sensing: 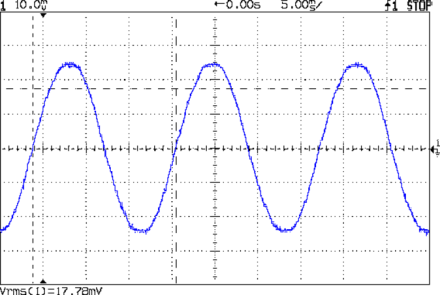 The oscilloscope is a DSO Shell, the worst scope you’d be willing to use: 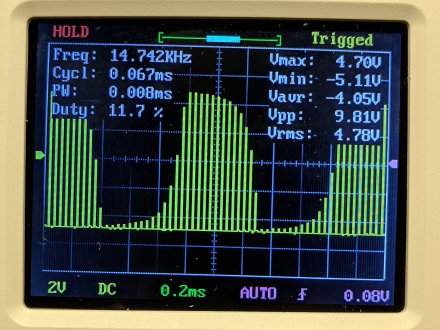 Use the DSO150 for analog signals in the audio range

But it’s way easier than hauling the real scope over to the laser for this sort of low-frequency glitchery.

The traces single-shot trigger on the leading edge of the current pulse, which works with manual shots on the Ruida’s control panel.

Do you know what ‘signal’ was used as the trigger ?

Ran across this a while back… supposed to be from Ruida 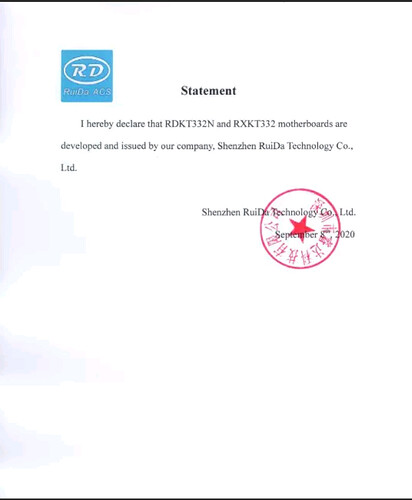 To be fair, I got the Tek probes before they became eBay collectibles.

The trigger is the leading edge of the laser current signal, converted to a voltage by the Tek probe: the DSO-150 isn’t fancy enough to have an external trigger. [grin]

At some point I must poke at the L-On and PWM inputs, but I’m pretty sure they won’t show anything surprising. The old supply ignored its L-On input and the replacement pays attention to the same signal, so the controller continues to work just fine.

OMTech also sent me that “Statement” when I pointed out the KT332 was totally white-label anonymous. Apparently I should be relieved it’s been anointed a Genuine RuiDa, even if it looks like an outsourced thing retconned into the family.

That would have broken my machine. The Ruida on mine runs the pwm as soon as you press ‘start’ on the console. L-On1 goes low firing the lps at the already running pwm rate. Escapes me how it could have worked missing a required control signal… 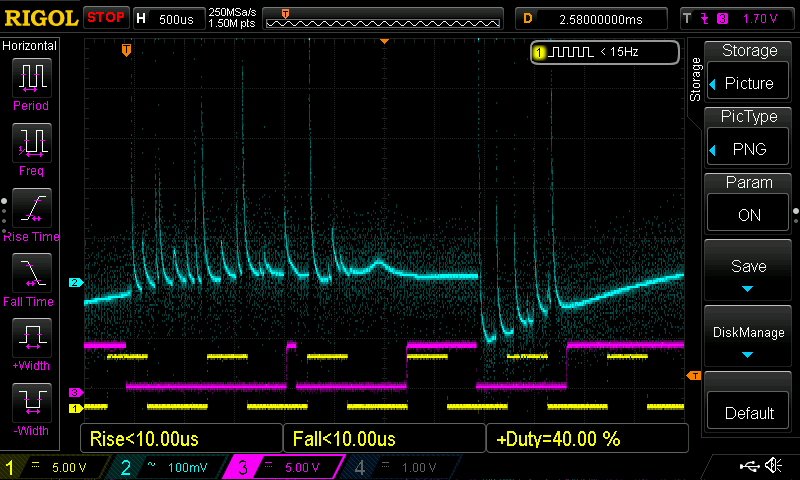 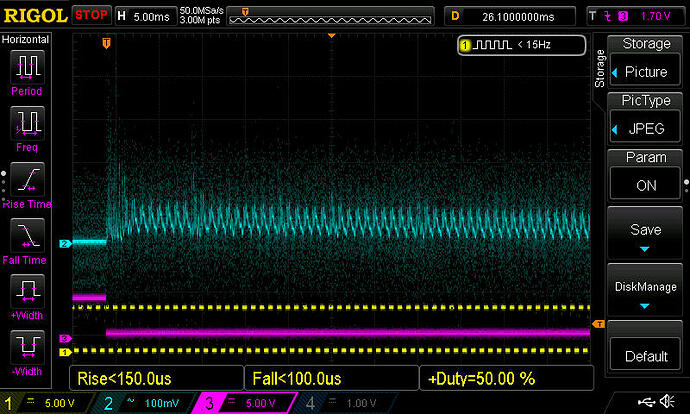 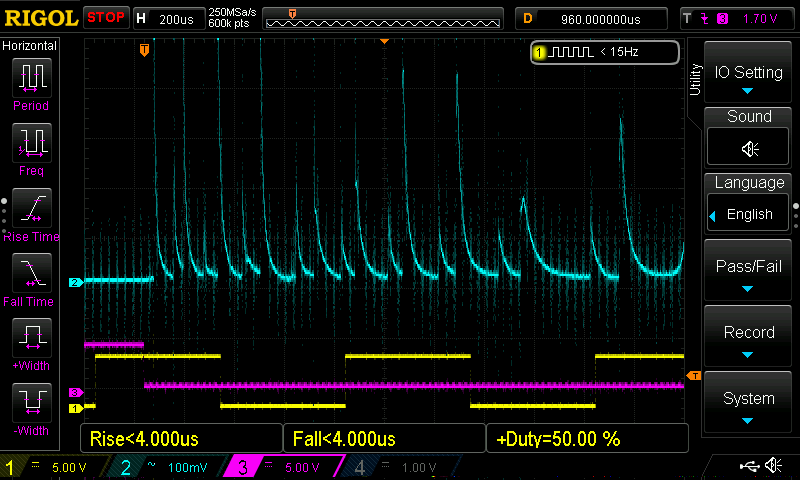 This has been the best I’ve been able to get so far.

I just want to know the lps response time…

how it could have worked missing a required control signal

Having the HV supply fire continuously at whatever the PWM input specified, even with the L-On signal inactive, was the clue telling me the supply was kaput. I’d be tempted to poke around at the input circuitry to see what failed, except for my morbid fear o’ dying.

Looks like your supply produces the same high-amplitude spikes after the enable goes active, even at 50% PWM, as OMtech’s anonymous replacement. Yours seems to settle down faster than mine, but the claimed “1 ms” response time seems mmmm aspirational.

I’ve been a radio amateur since the mid 70’s, worked on electronics when I was a kid.

I’ve gotten across 480v once, that was shocking… and bit by 15kV supplies.

I know of no person that has been killed by one of these. Almost 80% of all electrocutions in the US is from the home mains.

Let it sit for a few hours…

The input circuitry is not complex, there are schematics floating around out there. If I remember right the L, H and P inputs basically control the on/off of the pwm generator driven by the IN input. This effectively shuts off the pulses that control the ‘power’… 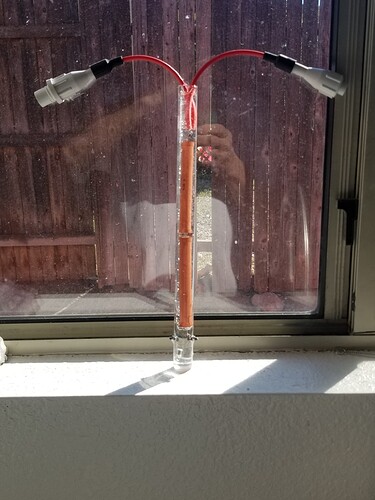 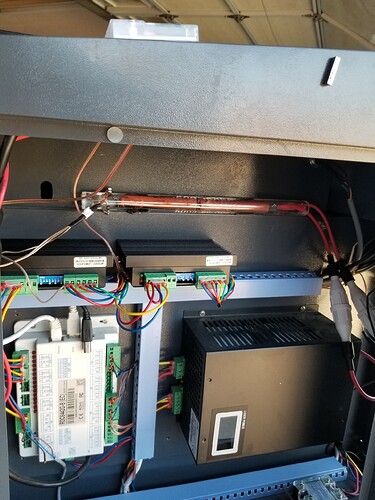 It does drain off any ‘residual’ high voltage…

There was nothing obviously wrong with any of the components / traces associated with the inputs, but I admit to not pulling the PCB and looking for mysteries.

The risk/reward ratio is entirely too high to justify building a test setup and I’d rather not use the laser tube as a fuse, so I’ll stick with a black-box replacement, crappy though it may be.

Hey! You want a lightly used, known-bad CO₂ laser power supply? USPS says for 16 bucks it can be yours! [grin]

Check out Don’s stuff, he hangs out in Makers forum, I think…

K40 Laser HV Power Driver  As the investigation of the laser drive methods continues we now aspire to understand how HV power is applied t...