I have tried several low cost methods to keep my cooling water on my 50 watt laser at an acceptable level, but finally seemed to have found something that works. I have seen variations of this but not this exact method.

I took an old cooler/ice chest that was laying around and drilled two holes in one end at the top just large enough to get the cooling tubing through each hole.
A coil of tubing (I think its about 50 ft) was placed in the cooler and the ends brought out of the two holes.
The return water from the laser tube was then connected to one end and the other end is sent back to tank after running through the coil in the cooler. The cooler is filled with water an inch or so below the holes.
Before I start to use the laser I place several freeze pacs in the water to chill it down.

I’ve used this the past few days running some cuts at about 65% (which is not too far away from the max power point for this machine. The laser cut about 15 to 20 minutes at a time for several cycles and the water never got above 20c. A huge improvement over what it was doing before.
If more cooling is required it could be accomplished by adding more tubing inside the cooler, or better yet, change the tubing in the cooler to a larger size to slow the velocity of the water allowing it more time in the chilled water.

Better solution. Pick up an under counter mini fridge and put an aluminum tank inside. I have a rough prototype in use with my 80W. It’s a little on the wimpy side for the 80W because the tank is too small. Going to make a custom tank to double my water capacity. Should be good after that.

$116 for an entry level chiller. The biggest single factor to consider is the advantage of a closed loop / sealed chiller. That is, the closed system and use of distilled water prevents algae as well as contamination / impurities.

You’re right about that. I found many of the “chillers” actually didn’t “chill” at all. They are mainly radiators. You had to get up to the 500.00 price point to start getting into true chillers.

My tank in the fridge has a lid, and a few drops of aquarium algaecide takes care of that. A few drops of Dawn keeps everything clean. Had the same water in for almost a year with no sign of any problems.

Best part is, since the laser is out in the shed, I have room for a few beverages beside the chiller tank! It drops the tank temp to around 30F to 40F below ambient. I do need to make a custom tank though, the only bucket I had that would fit is a bit small so I don’t have as much thermal mass as I’d like.

This is mine. 3/8" x 25’ copper coil on return side and 3/8’ x 8’ coil on inlet side. Both are tucked inside the bucket. Been using this for approx. 16 months. Have changed the regular tap water twice. Probably change again soon. 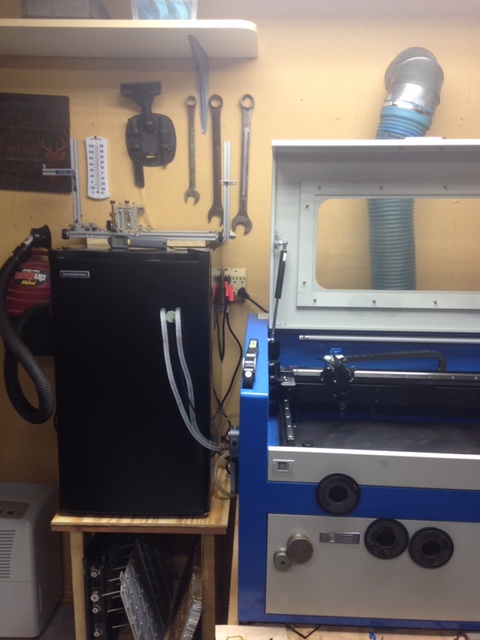 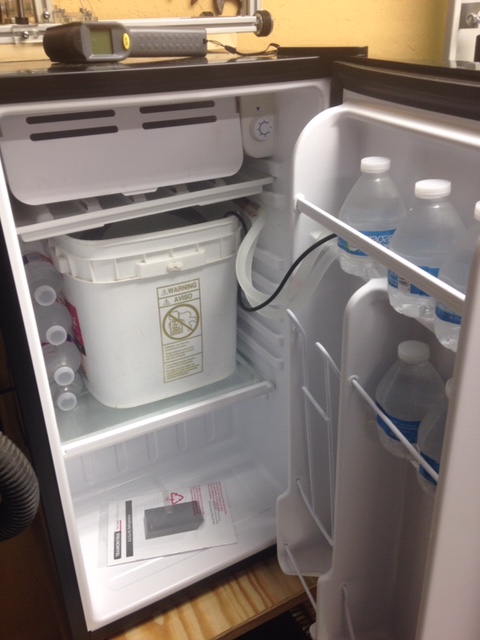 A cheap condensing chiller is an aquarium chiller or a brewers chiller - US$250ish.

You see a lot of AC and dehumidifier mods on the home brew sites for chillers. All depends on what you want to work with. If you are lucky enough to not be in a freezing environment, a DIY chiller can be a fun project.

I’m not in that situation, and when I get the chiller with a heater finished I’ll post pics… I hope it’s in it’s final phase before the freezing temps hit again.

I had this idea for my 75w build that is progressing, what size laser tube do you have and what kind of water temps are you seeing?

I have an 80W China Red with a similar set up to Will. My tubes go out the back. My starting point for my temps is around 42F, and my top working temp for my tube is 77F. With a rough 3 Gallon bucket, I get around four hours working time in the summer, more spring and fall. The bucket is a bit small for the space, but my ‘perfect’ 4.5 gallon bucket wouldn’t let the door close. I have some sheet aluminum I’m going to bend up for an almost wall to wall tank that should be around 7 gallon. Going to leave a gap on two sides and bottom for some left over heat sinks. Can add a couple of biscuit fans on them if need be.

I tried routing the return line up through the freezer and leaving an air gap for it to siphon back, but it froze before it could… oh well.

Since I don’t actually use the freezer, a guy on another forum suggested turning the fridge warmer so the freezer doesn’t actually freeze and still run a loop up there. I’m thinking about it, but haven’t pulled the trigger in it yet.

James, my results are pretty much the same as Dave. I have a 60w with starting temp around 40F and rises to as much as 85F near Houston Texas in a non air conditioned shop. Hard to say my run time before it reaches the max because I turn it off after each use. If you allow it to keep running between set up of jobs you are just waisting your chilled water time while it circulates for nothing. I know that I can get about 3 hours of full power cutting before it reaches around 80F. Much longer if doing engraving and turn off between jobs. BTW I used my laser for about 3 years in the same shop with a 5 gallon bucket on the floor and no thermometer with no problems, so no matter what it is much better than before.

Yeah, more power, more cooling. Some of the K40 guys get away with frozen bottle in the small bucket.

If you are looking for a budget setup, aquarium chillers are the best bang for buck. 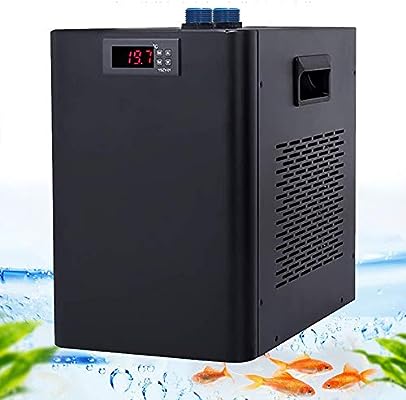 I like this idea. Unfortunately it begs a bunch of annoying questions…

What is the lowest temperature setting?
How often does it cycle when running the laser?
Is this how I would set it up if keeping my existing water bucket, pump, and, most importantly, heater (it’s in unconditioned space) ? 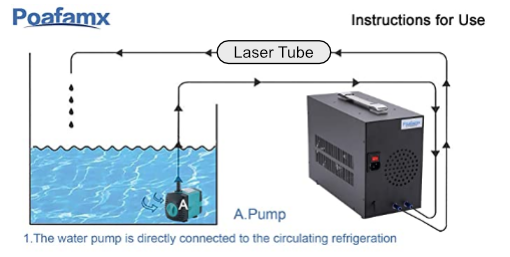 The average operating temperature of a CO2 glass tube laser is 20℃~30℃ (68F - 86F). You will see slight variation of these numbers depending on the manufactures specs.

If you can keep your water temps in this range, you will not have any significant problems.

I like this idea. Unfortunately it begs a bunch of annoying questions…

What is the lowest temperature setting?
How often does it cycle when running the laser?
Is this how I would set it up if keeping my existing water bucket, pump, and, most importantly, heater (it’s in unconditioned space) ?

Yes, a proper compressor-equipped 16 gal chiller will work fine. They are quiet and efficient and should be long-lived. The bigger the water reservoir the less variation in temp you will see. I would run it 10-20 minutes before starting your job to get the reservoir to a decent temp. A lidded polystyrene fish box makes a great reservoir.

You can go too low, depending on your ambient temps and humidity. The last time I ran K40s to any extent I lived where the humidity never dropped below about 85% and often was in the high 90s with overnight temps of 25-30C and daytime 30-40C.

It was literally in the jungle.

Run too cool (15C) and you get a lot of condensation, which if your machine isn’t particularly well electrically-fettled, can cause arcing, and worse.

Find out the average dew point for where you live and set a couple of degrees C above that to reduce the chance of lots of condensation.

Reci define their tube operating temperature as 10C - 50C, where Teyu (the makers of the S&W range of chillers) say 20C-30C gives the best cooling performance of the chiller. I run mine at 22C, after a year of 19C saw the damned thing kicking off all the time when the machine was not operating. I found setting that 3C higher meant the chiller would only kick in once or twice an hour, vs every 5-10 minutes.

At the end of the day, running too hot leaves you open to tube failure, where keeping it under 30C is pretty easy to do.

If you are a casual hobbyist user, who runs the machine for a couple of hours a day at most (cutting time, not switched-on time) a 20 gallon polystyrene box with a bunch of frozen small coke bottles full of water will be just as effective. Spring for a digital bath thermometer and mount it on the case so you can see what the temp is before you start - if it’s upwards of 25C, chuck in another frozen bottle.

If you intend progressing and buying a bigger laser, buy a proper S&W chiller at the same time - it’s usually way cheaper as a pair and a lot of cost is in shipping a big heavy box.

As a reference, I ran a CW5200 connected to six K40s for 2 years continuously - only time it was off is if we had a power cut. They are extremely reliable and over-spec for cooling a laser. you do need to check the water level, though - I don’t know where it goes, but in a couple of months it can lose half it’s water, despite being in a sealed reservoir. I suspect aspiration through the tubing or losses in the pump - there has certainly never been any indication of pooling or drips.

That’s a great addition here, Bonjour!
I’d add a thermometer so the temperature is measured accurately. Inkbird is a good option