Hi everyone,
I’m Sunny. I’m new here. I didn’t know such an active laser engraving community existed until now! I own a 60W fiber laser engraving machine and had it for months now, but still lack a lot of laser knowledge. Apologies in advance!

I have been wanting to create 2.5D portrait coins for months now like the photo attached. My question is, does anyone have any idea if something like this is possible with laser? Or is this only possible with a CNC machine?

The photo is engraved on a 20mm diameter silver sterling coin with 2mm thickness. I’m not sure about the face depth, but it doesn’t seem that deep.

I tried engraving jpegs and hired a few 3d model designers to create STL files, but the results would just not come close to what I’m aiming for. Jpegs are flat and STL files look slightly different from the photos and don’t have enough detail because it’s basically digitally sculpted.

I’m just so amazed by the attached photo because it’s like an exact copy of the photo with all the details, but at the same time is 2.5D (not flat) with shadows and everything. It contains so much detail when the face depth doesn’t seem that deep.

Any help or guidance would be extremely appreciated! 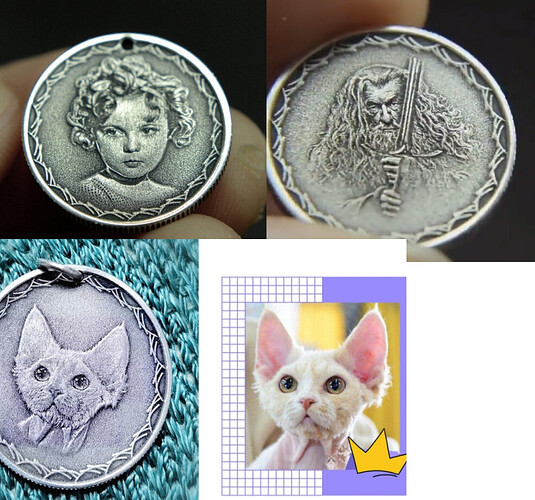 Welcome Sunny!
3D engraving is possible with lasers but unfortunately LightBurn does not support fiber lasers at this time. When you are doing 3D engraving, it is done with what is known as grey scale engraving. I do not know the software you have for your laser but see if it does support grey scale and do a search on the web about grey scale images and lasers. There is a wonderful amount of information and hopefully you will find a solution that fits your laser. Lots of luck to you!

When I tested out my laser in the past, I engraved a purchased STL file that looks like this. So, I feel like my machine can do grey scale engraving. I just don’t think the coin samples I posted are STL files because of the amount of detail and similarities with the photo. I’ll have to do more research for sure. Thank you once again! 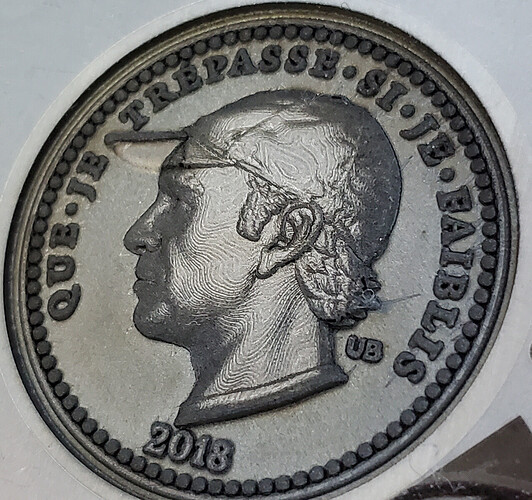 This was engraved on 5mm MDF, but I’ve had decent results on PMMA acrylic, as well.

You can certainly get decent 3d effects with a laser. 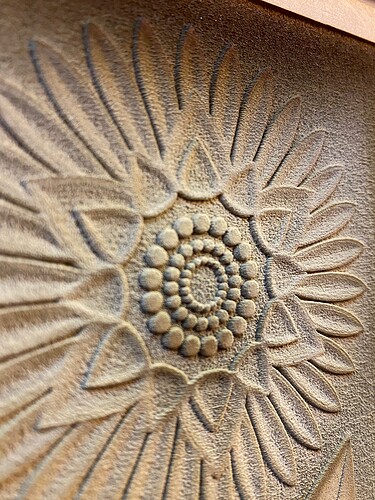 Thank you for sharing! I’m glad to hear that. I’m looking more into grayscale engraving as HalfNormal has mentioned. It seems like you already have experience with it.

I’ll be testing out grayscale photos and also turning grayscale photos into STL files then engraving. I’m not exactly sure which one is the proper way to do it. I’ll have to experiment and do more research.

Any advice or tips would be appreciated. Thank you!

I have also played a bit with grayscale images, but the 3D effect occurs as a side result. (approx. 0.8mm deep at the frame, picture is not washed only gently brushed)
My experience is that it very much depends on what material you are trying to engrave and that it takes time. With relatively low laser power and 2x45 degrees at cross, I get reasonably nice results. Picture below is made with a diode laser, apart from crosshatch I can not remember the precise settings but the laser must be very well focused, I remember. 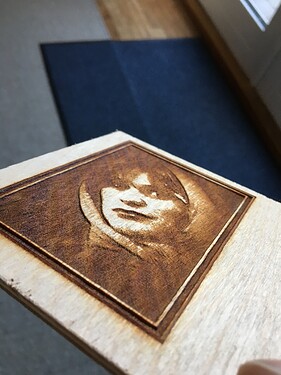 Hello Bernd,
Thank you for sharing your experience! The thing is, I just can’t seem to believe the coin samples were simply made by engraving jpegs. I feel like there’s something more to it.

Below are engravings I have done myself. #1 is a deep engraving with an STL file created by one of the 3d model designers I worked with. #1 doesn’t seem like the coin samples for sure. I don’t think digitally sculpting is how the coin was made. It’s too different from the photo.

#2’s are all jpegs. #2 also has a very different look from the coin sample. The coin sample is just way more 3d looking with so much detail. I can’t seem to figure it out.

I also tried looping the jpeg engravings a few times to see if it’ll create more depth and make it more 3d looking, but that didn’t seem to work either. It just erases more detail. This has really been driving me insane for months now.

Anyway, sorry for ranting lol. I really appreciate your input! I’ll definitely do more experimenting and research. Thank you. 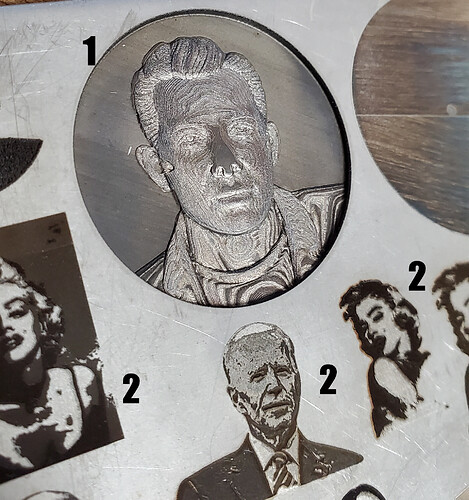 Sunni, you probably end up buying yourself a phase laser 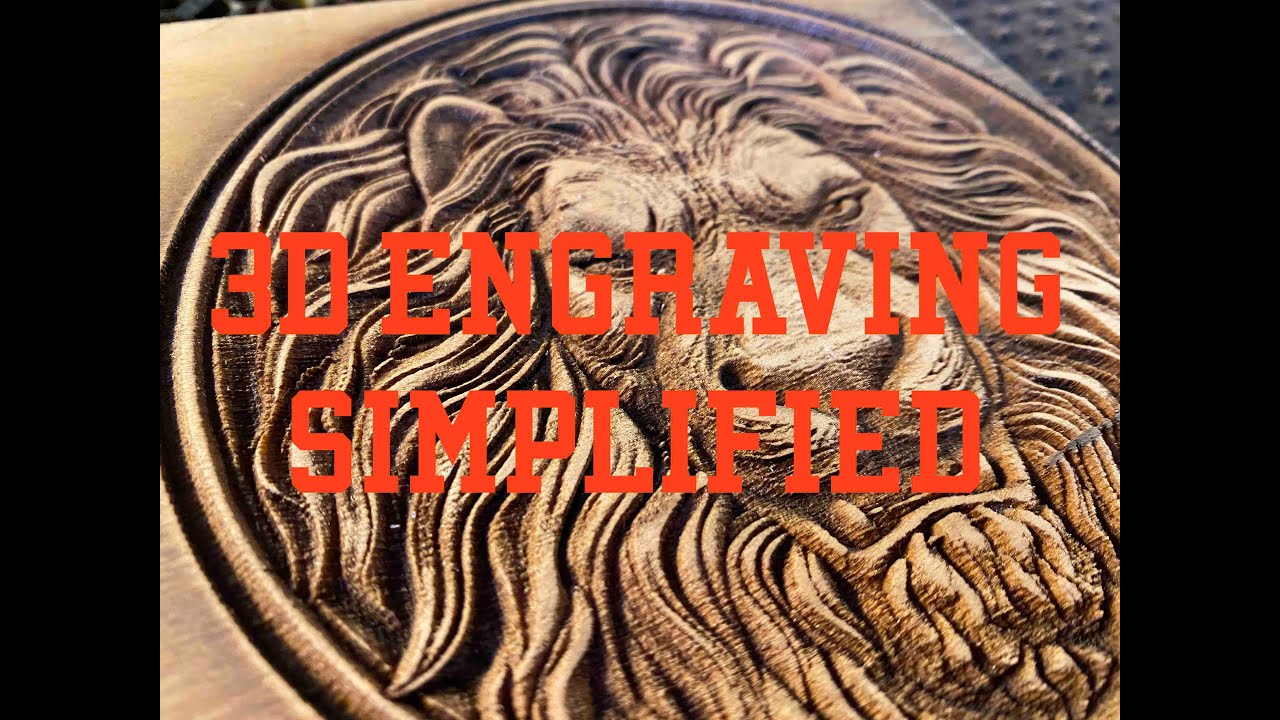 This image will 3D engrave well. 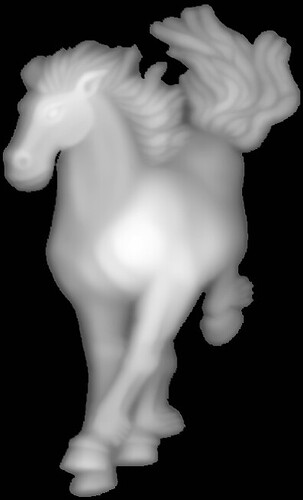