Hey folks,
just getting started with the S9. I have some weird precision issues. Circles won’t really come out round and also when starting and finishing shapes the lines will sometimes not line up as they should. Speed set to 250mm/min in this example so I guess it’s not a speed issue. Any ideas?
Oh and were talking quite small scale here, this item is about 2cm tall or so. But again, not sure if this is really the issue.
I read another thread with a similar issue and that seemed to have the belts as the problem. As I said I’m just getting started on the topic so I have next to no experience, but I’d say the belts do have quite even tension. Even compared to the X-belt that was pre-installed.
Thanks in advance! 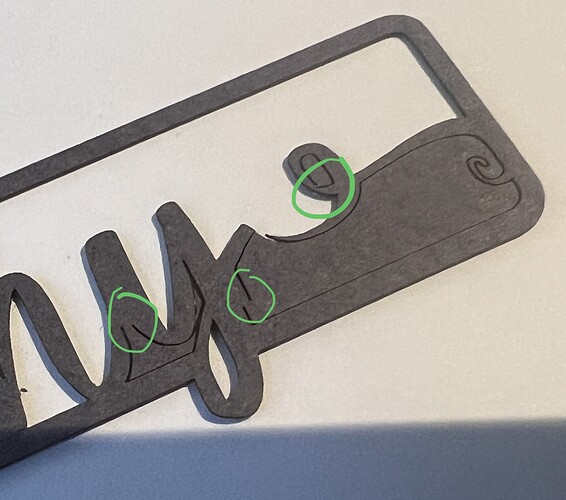 this item is about 2cm tall or so

On that scale, it’s almost certainly a loose mechanical doodad.

In particular, the tiny screws holding the pinon gears to the stepper motor shafts get overlooked all too often. Make sure each screw is both aligned to the flat on the shaft and firmly tightened. If they’re not sitting on a flat, they’ll gouge the shaft and begin wiggling as they work loose.

Similarly, the jockey pulleys guiding the belts must be firmly anchored to their plates and those plates tight against the frame.

Even with snug belts, if the screws on any part of the frame aren’t tight, you’ll see it.

First of all, thanks for the quick response.

I did tighten the belts now and also a number of screws, especially on the axes of the rollers that drive the belts. I don’t know if that’ll do any harm in the long run, the noises the machine makes now have changed quite a bit. But indeed, it has helped.

Circles are now much more circular and in general the precision seems to have gone up a bit.

However, it’s still not connecting the start and end points precisely. Definitely got better a great deal, still not 200%, but at least getting close to a solid 95%. See attached. Any other ideas how to improve? 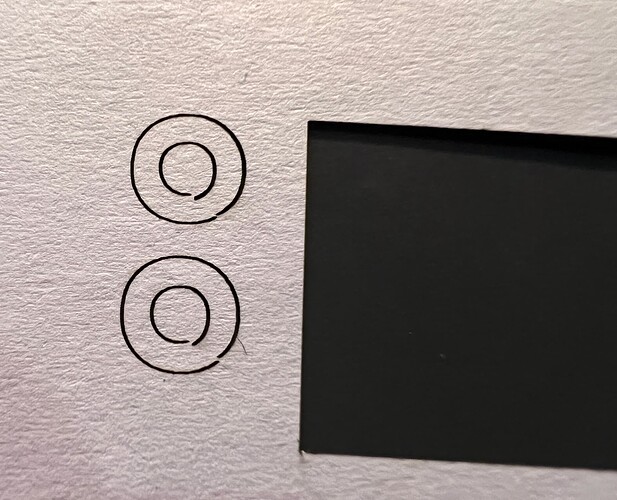 still not connecting the start and end points precisely

The orientation of the gaps tells you where to look.

For example, if the baseline of the letters in the lower picture was parallel to the X axis, then the gaps are due to backlash in the X axis: moving left-to-right, then right-to-left doesn’t return the laser head to the same position.

In addition to the motors / pulleys / belts / anchors, make sure the laser head is firmly anchored to its carrier and the lens assembly is not free to move.

Backlash is one of those problems where fixing the first 90% is easy and takes 10% of the time. Eliminating the last 10% takes 90% of the time and teaches you more about how mechanical doodads don’t work the way everybody thinks they should …