Problem with wiggles at end of line

Problem with my Ortur Laser Master 2 S2-SF with LU2-4-SF. I’m getting wiggles at the end of a line and though using overscan in Lightburn reduces this, the line ends don’t line up as they should? I’ve reduced acceleration $120 from 2000 to 1000 and it makes little or no difference. Belts are tight, no play in rollers or anything loose. I’ve only had this a month and not happy. Before I raise a query with Amazon has anybody any ideas? See photos for details of problems. 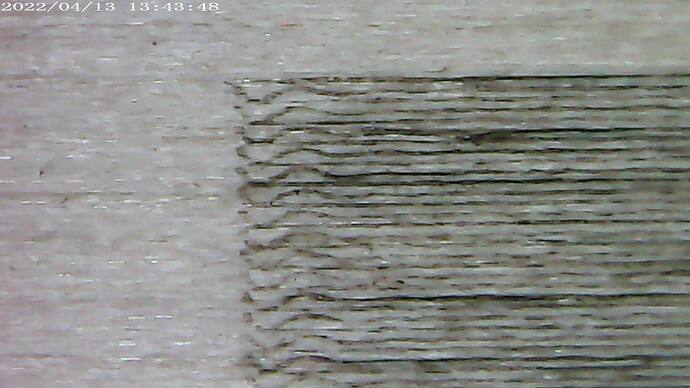 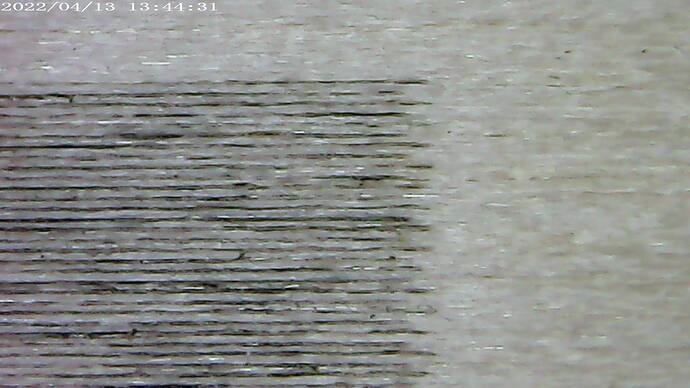 The bottom photo, lines not lining up is probably backlash, you can see it in both directions. The wiggly lines obfuscate it in the top photo.

It doesn’t seem to appear on the right end.?

Since you claim everything is good and snug, I think we’ll have to ask @OrturTech for help here. He knows the machines well. As do others, I don’t have one of these…

Usually ‘wiggling’ lines like yours are a hardware issue.

checked belts and wheels on all axis and they are all tight with no play. Reduced Y accel too - made no difference. Am waiting for Ortur support to get back to me to see what they suggest. It’s weird though that Y is wobbling while X is decelerating and Y is stationary at the time.

Y is stationary at the time

Apparently not as you can see Y’s movement.

I would hope @OrturTech would drop by and assist. He knows more about these machines than most.

I hope you saved the machines original settings…

Ortur support got back to me and suggested things I’d already done. I responded but no response from them since last week. What’s weird is it’s on deceleration only. I found a wheel with lumpy bearings, changed it and no effect whatsoever. Why deflection is in Y when that axis is stationary at the time I don’t know. Next port of call is Amazon support.

The wiggles at left are typical of front-back tilt of laser head on gantry during y-axis shift. This is caused by wheel gap between gantry wheels and rail.

You indicate that you’ve checked for play in rollers but can you describe how you’ve done this? Can you confirm that gap between wheels and railing has been closed (but not overtensioned)?

I can’t quite make sense of the entire set of symptoms. The fact that you’re only getting the wiggle every other line but not seeing the same wiggle on the right is odd. It would make sense if the second photo is not of the same burn and that’s your overscan test.

Your answers will help clear this up.

Can you also attach the .lbrn file used to create the test pattern here?

No gaps in wheels and not overtensioned. The wiggles are at the end of a line during deceleration. I am using bidirectional fill. The Other photo was was an overscan test in case it was related. I’ve fixed the overscan but not the wiggle. The test file was simply a 20mm wide 10mm tall rectangle run at 3000mm/min with a 0.2mm line interval and scan angle 0 degrees, fill mode. It is also there in Line mode if a sharp corner exists. The wiggle is in the Y direction while X is decelerating only.

Amazon agreed to refund me if I want even though it is now more than 30 days as Ortur are not replying in a timely manner. I would prefer to try and fix the problem but am somewhat stumped. I sent them a reminder yesterday asking if the had any update but no response so far.

What you’re describing is almost certainly mechanical but you’ve addressed the most common scenario.

Can you confirm that if you push and pull the laser module do you feel any forward and movement? If so, try to isolate where that motion is coming from.

Try wiggling the lens barrel. Do notice any play there?

Effectively you’re looking for any sort of movement along the Y axis. I assume your material is well secured and that your bed itself is not moving on the platform relative to the material but please confirm.

If you dramatically reduce speed, does it change the characteristic of the wiggles? It should if it’s mechanical. If not then something else.

If you do unidirectional, do you still have wiggles? Try to test this in both directions. If no, then definitely mechanical.

What happens if you try vertical lines?

There is some instability in the laser mounting but it’s stock and a crap design IMO. There is a huge overhang under the mounting dovetail at normal working heights but even set full up so there is no overhang and work raised to focus height the wiggles is there. Unable to test lens it’s a LU2-4 SF and the lens is deeply recessed and the retaining ring is glued in position. Material is secure and frame is fixed to 15mm fireproof MDF base. Not tested unidirectional but will tomorrow but I suspect it will still be there as doing a vector rectangle in line mode it’s on the horizontal lines at the end of the move. There is a very small wiggle in one direction only doing vertical lines.

I suggest you investigate this further. It may be a crap design but it’s at least capable of better than what you’ve been getting so far.

There is a huge overhang under the mounting dovetail at normal working heights but even set full up so there is no overhang and work raised to focus height the wiggles is there.

I’m not sure about your particular model but are you able to mount the module to a different part of the plate? Do you have an adjustable focus height assembly on yours? It’s possible that your laser is mounted farther down than anticipated or well supported.

Unable to test lens it’s a LU2-4 SF and the lens is deeply recessed and the retaining ring is glued in position.

As long as there’s no notable wobble in the barrel itself I think you’re probably okay.

vector rectangle in line mode it’s on the horizontal lines at the end of the move.

Is it only at the last corner or also at the opposite corner?

There is a very small wiggle in one direction only doing vertical lines.

To which direction does the wiggle go? How does this correlate to the direction of motion?

Here’s the mount, the model is the new S2 and the lower wheels are now aligned with the top ones. 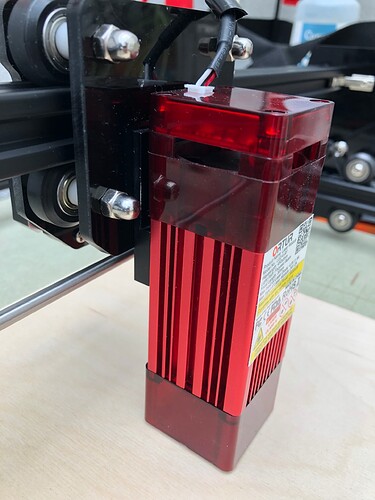 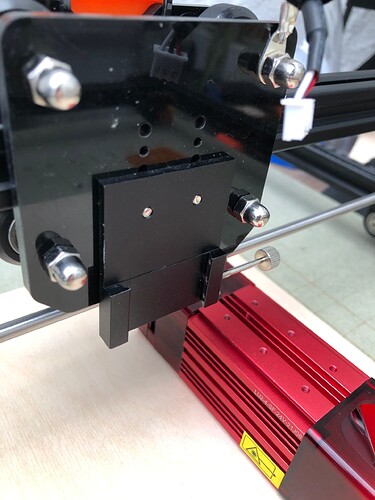 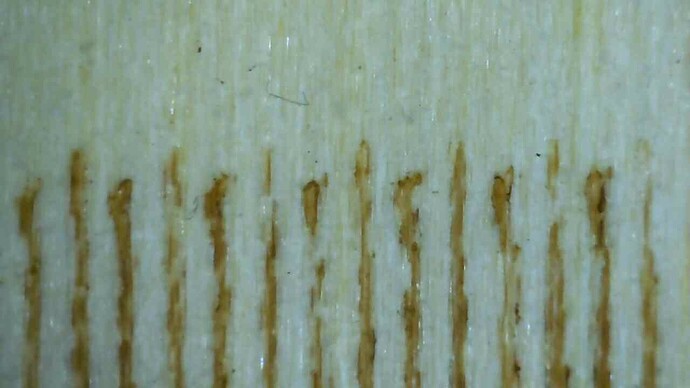 and the lower wheels are now aligned with the top ones.

Is this to say that they weren’t previously aligned?

As you can see it’s impossible to mount any higher as it wouldn’t be able to focus on thin materials.

From what I can see it looks like that’s how Ortur builds them as well.

Based on the vertical line test and rectangle it’s almost certainly a mechanical issue with movement along the Y-axis.

When you checked for gap between wheels and rail, did you find an issue that you had to correct or it was fine from factory? Have you physically lifted the head assembly to confirm that there is zero clearance between top wheels, rail, and bottom wheels? You should not be able lift the assembly any distance at all before lifting the entire gantry.

I wouldn’t normally recommend this but perhaps try overtensioning the wheels so that they’re slightly squeezing the rail between the top and bottom wheels. See if that changes the artifacts. Then back off the tension as much as possible without reintroducing the wiggles.

On previous designs the two bottom wheels were closer together than the top ones on the X carriage. Had to adjust the Y carriage wheels. It comes with gantry pre assembled and has to be slid onto Y carriage rails. They were very loose to allow easy assembly. There is zero clearance between wheels on X - I’ll have another go at adjusting Y wheels and see what difference tight makes. Thanks for all your help too.

Made very little difference. In order top to bottom this is " as is", very tight, and loose Y carriages. 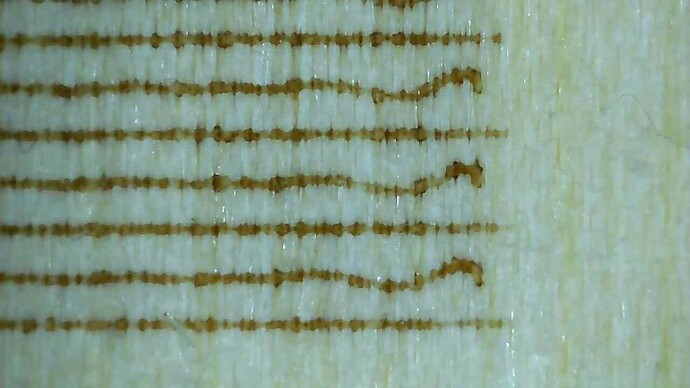 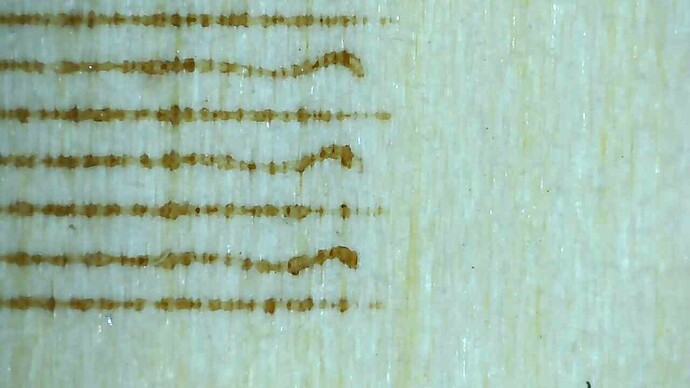 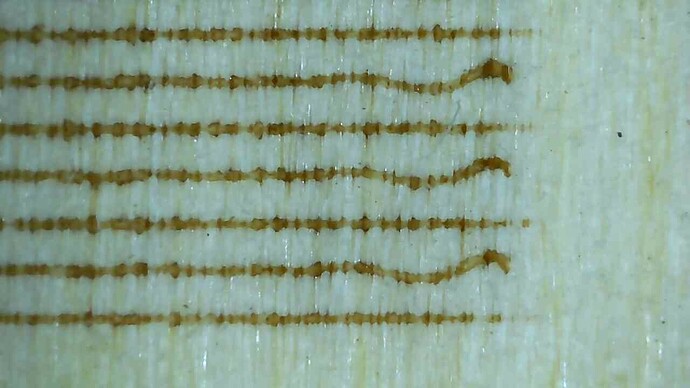 I can’t decide if overtensioning made any difference at all, maybe slightly more muted. Y-axis doesn’t seem to have made a difference.

When you move the laser module front and back from the mount, can you see where there is free motion? I assume either between module and focus mechanism, focus mechanism to mount, mount to wheels, or wheels to gantry. Is there any way to temporarily secure it with tape or something else to reduce any ability to move? Would like to see if the wiggles even can be eliminated with this line of reasoning.

Also, I haven’t asked but are the wiggles present no matter where on the bed the engraving occurs?

I don’t think overtensioning made any difference. As for the head - the whole thing flexes but I managed to jam some thin ply bits in to wedge it as tight as I could - made no difference. Tried on bed in centre, and all four corners - just the same I’m afraid. The only other thing I can think of it’s the laser module itself - maybe the diode inside is loose or the lens but there is no way of checking either.

Hmm… maybe that was the entirely wrong line of reasoning.

I feel like these are less likely but we can explore a few other scenarios if you’re willing.

If you pull or push the gantry to the full front or full back, do both the left and right side bottom out at the same time, meaning they’ve gone as far as they can? Or does one side consistently hit earlier than the other? Low chance but if you have a twist tension built-in then perhaps it’s causing the wiggles as the motors decelerate and allowing the tension to not be overcome.

Another test. Are you able to try a burn with the front or back of the frame slightly tilted up? Does that affect the wiggles?

I think you may have tested this… Does dramatically slowing down your speeds affect the look of the wiggles?

Gantry hits back or front evenly both sides. Tilting does not remove it. Reducing speed to 1000 reduces wiggle but does not get rid of it.