My first attempt at a pseudo production. Setting up eight coasters at a time.

Laid down a sheet of steel, taped some cardboard to it and then used the 4" squares for the tiles to cut out locating holes for the tiles. The weight of the steel sheet kept the template in place nicely.

This allows doing multiple passes on each tile as needed, some had a lot of variance, so doing a dither a few times and then a sketch mode resulted in some really nice looking etches. Flipping the coasters over to etch the branding on the bottom was a breeze, I also have a google sheet I started to keep track of all the things I serialize.

Doing this in absolute mode is best, though it will work in “Current position” so long as you never manually jog the laser head.

First set with the owls was a learning experience in art selection. Some were pretty tricky to get good solid etches, others were perfect with the first go. Lesson learned, spend the time in prep with the art and you will start to understand when too much detail is a bad thing.

Also, oiling after the etch really toned down the contrast. they still look great at certain angles, but the second set of bear art was oiled first then etched and it makes a notable difference.

The bear set was almost entirely done with a single dither pass. The bottom right little guy needed a sketch pass to bring the edge details out.

I was also able to test out the dynamic text features and it worked great. These friends now have items #1-16 serial numbers.

The whole process of doing this from image editing to etching was super enjoyable. 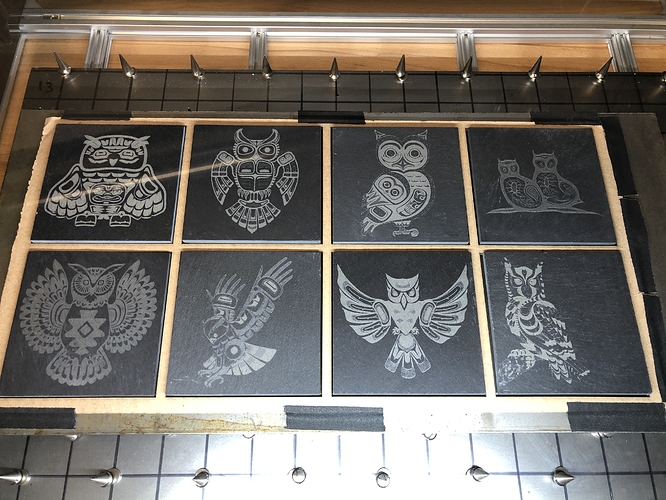 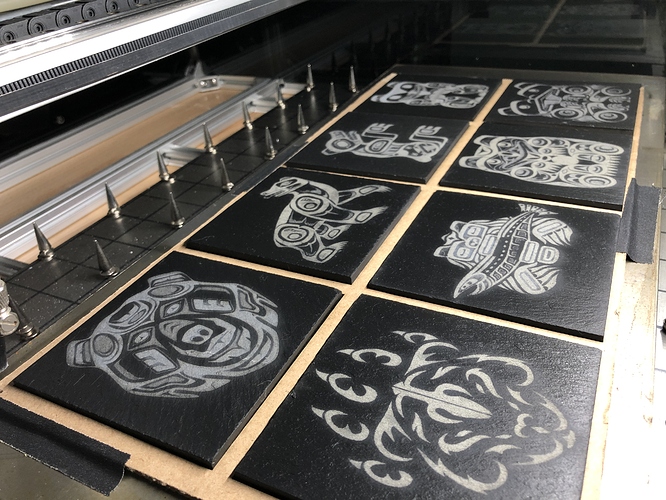 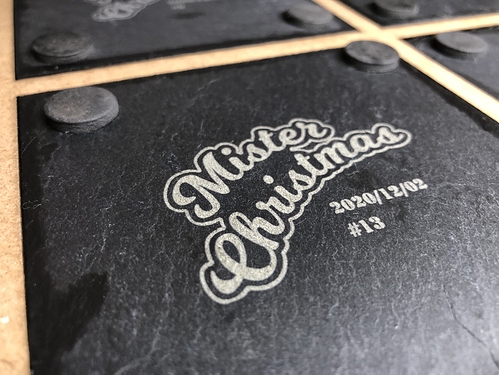 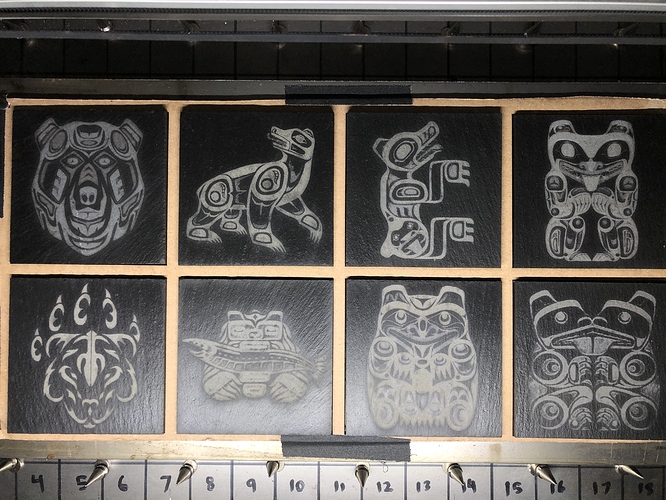 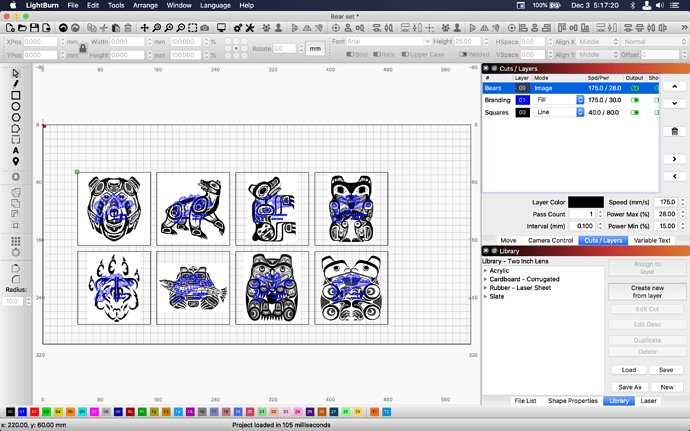 I also used the Art Library for the first time which was pretty intuitive.

Created the branding as it’s own LB project, then selected the vectors and added them to the library.

Injecting them into the coaster project, positioning it centered on the first tile, setting the offset and then using the array tool to copy them all on their own layer.

Thanks for the write-up - I enjoy reading about how people work, which features they use (and for what) as well as sticky points encountered. Your results look fantastic.

Very nice outcome. I have used a similar template when doing coasters with my diode laser. I hadn’t thought of using Sketch to bring out details.
Can you tell us where you got your slate coasters? They look very flat compared to some I have purchased in the past.
Thanks

Thanks!
I noticed how light some of the “grey” details would etch in dither mode, even after several passes.
Sketch does a pretty good job of edge detection so I tried it and it over top the dithers and it really made it pop. Sketch of course doesn’t fill any of the solid areas so you still get the nice gradients.

These are the coasters I used:
https://www.amazon.com/gp/product/B01G6MHU9Y/ref=ppx_yo_dt_b_asin_title_o01_s00

I have ordered 3 sets of them now, they vary a fair bit in thickness but are all very much the same 4" squares. Some of them seem to have a blue tint, note the top left bear, still looks great though.

When you create your jig to hold the tiles, if you include registration marks on it (top right and bottom left) then you don’t need to worry about alignment ever again, you can just use the Print and Cut alignment tool to make the template on the screen exactly match the jig on the laser no matter where in the workspace it is.

I have started including the registration marks on all my production jigs and I never worry about alignment anymore.

I’ll chime in as the champion of finding a great use for bandit signs as indexing spoil boards:

@gavin, I find the most accurate approach to double sided engraving is with the use of a disposable spoil board. You can find all of the free spoil board material you need littering the side of the road as illegal coroplast bandit signs. Temporarily secure the spoil board to your laser bed. I just use some gorilla tape. Focus your bed to the coro material. Run the outline of your object on both sides as a line layer: [image] [image] [image] Once you have your spoil board index cut, p…

Yeah, I haven’t played with that feature yet and it would be wonderful, except I use an adjustable height nozzle/lens.

When I was using the camera after calibration I noticed a fair bit of misalignment due to shifting the focus height higher with the nozzle tube adjustment.

I have plans to try doing the calibration at different heights and export/import them into a folder to combat this but it a bit more hassle than I am prepared for currently.

The other option I am considering is making a lower section for my custom laser machine that would house a stepper driven bed. With that I could always lower my material surface to the calibration height and enjoy the benefits that provides.

Right now the adjustable nozzle is so fast and simple I haven’t had much need of the camera at all.

One thing that just occurred to me that might not be ideal with print and cut is the fact that the alignment being off a little bit mean the raster lines will not be perfectly horizontal anymore.

Maybe the output wouldn’t be any different?

I am curious what the others and the LB teams experience with fill mode using Print and Cut has been like?

The Print and Cut tool does not use the camera, you manually position the laser head over the registration marks using your red dot. So you do want to be sure the red dot is properly aligned.

Ah right, forgot about that. No red dot on my machine unfortunately

No red dot on my machine unfortunately

I do not have a red dot either, but I still use the print and cut through pulsing and intricate moves via the move pane.

Print and cut doesn’t rotate the output sent to the laser, it rotates the source vectors / images, prior to generating the job for the machine, so what gets sent is aligned correctly. This won’t work if you use pass-through on images, but everything else behaves as you’d expect.

Those look so nice

That was so useful, thanks Mr Christmas!

Cool, it was a fun process to work through. Projects like this have been in my head for so long, it was a real treat to use all those features of Lightburn in a session.