The circle is not a circle

Are you doing this with the machine off?

sure, only with power OFF

Also, have you checked for dimensional accuracy of the design->burn? Measure the square and calibrate the axes as necessary to adjust.

I have made a square with 40 millimeters sides. Its effective dimension was 39.85 and i have correct it (both sides had same dimensions) but after a test nothing changed.

I also tryed to reduce speed to 30 mm/s and it looks better, but not perfect (and also i can’t work with 30mm/s speed)

In the photo last test made: 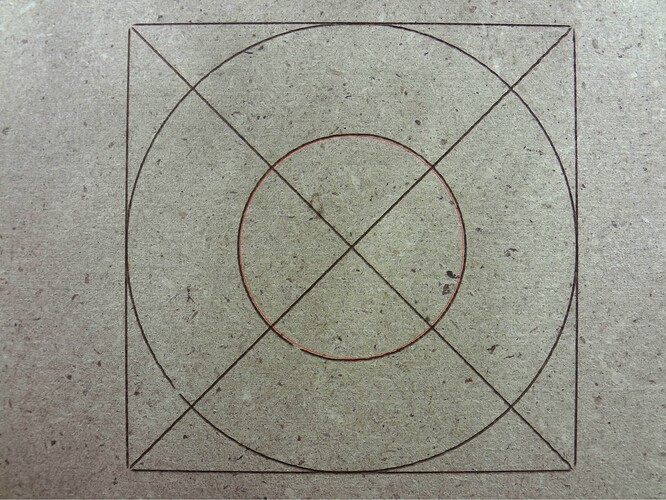 It looks like the start and end points of the circles aren’t closing. Is that right? Also, the corners of the square don’t meet.

Also, can’t quite tell but the sides of the square look like they may be bowed out. Did you check with a straight edge? This might just be the picture or an optical illusion, however.

Are you certain you’ve removed all backlash and binding from the system?

Try enabling “Hide backlash” in Optimization Settings in Laser window. Does that improve the situation? If so, then there’s likely still some backlash in the system that you’ll want to hunt down.

It looks like the start and end points of the circles aren’t closing. Is that right? Also, the corners of the square don’t meet.

This is beacause i have set Min. Power too low.

This might just be the picture or an optical illusion, however.

You’re right, this is only a optical illusion caused by fisheye effect of the camera.

Are you certain you’ve removed all backlash and binding from the system?

Think yes, but maybe there is something else to check i can’t see

I have also try do add a backlash correction in Y axis via Machine Settings: better about square and circle overlay in the upper side, but really worst about circle quality

How did you do this?

How did you do this? 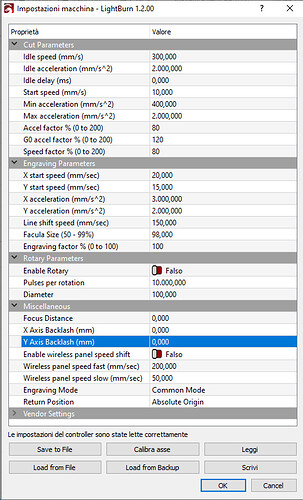 Ah… somehow I thought you were on a different laser.

And you’re saying it made no difference in behavior?

Did you also try the “Hide backlash” in Optimization Settings?

And you’re saying it made no difference in behavior?

Yes, i’ve seen some difference but not what i hope

This is with a +0.3 Y backlash correction 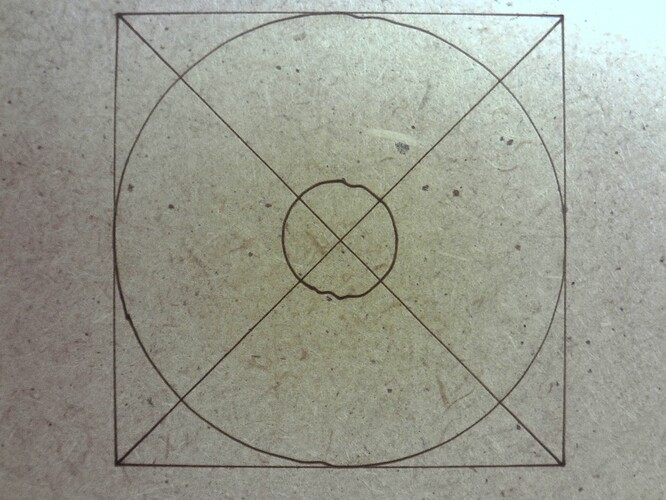 [IMG_20220311_123251061_HDR] Back in march I made a post about an issue when I cut a radius into a diagonal line I was getting rough cuts. More details are at this post if interested Jagged cut line only after a radius into a diagonal line. w/image Im still dealing with this. I have replaced all bearing and roller wheels on my gantry carts and my laser head is running on a linear rail now. I have run the laser while side loading the head to make sure its not jiggling and still get the same …

and another member said their similar problem was caused by one of the steppers.

Thank you @GingerKarma, i’m reading now. Hope to find a solution, or something to try

Did you also try the “Hide backlash” in Optimization Settings?

@berainlb In the picture below you can see the difference without (lower row) and with (upper row) “Hide Backlash” active. 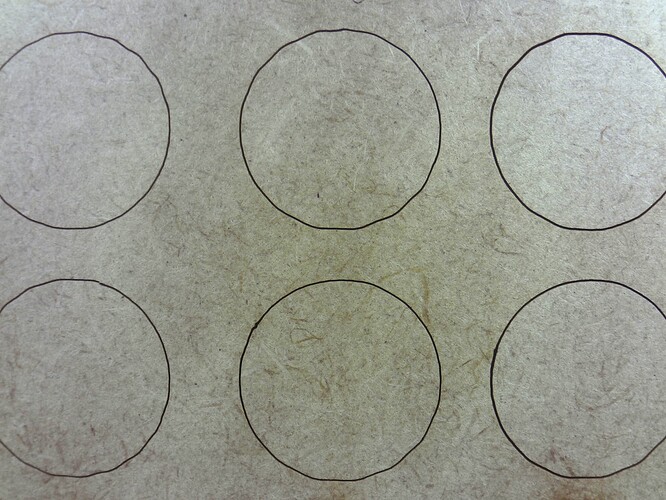 Looks marginally worse or at least no better.

For the wobbly lines, make sure that the lens is firmly secured in the barrel. There’s still something likely mechanical going on.

The thread GingerKarma referenced above is mine. I have been meaning to reply back to it as to where I was with my issue. My issue was happening around radiused corners not circles but maybe you will see some results. It looks like the diagonal direction changes in your X my have slight bump in them? I was forced to cut at 30mm/s which was way to slow. I am now cutting the same materials at 70-90mm/s and have reduced my cut time by at least half. On thinner materials I am cutting well into 160mm/s plus limited only by my 60w tube. This may be a bandaid for something else that is causing the issue but it at least has me up an running with great results

In Lightburn under EDIT> MACHINE SETTING>CUT PARAMETERS I was running my Speed Factor % (0-200) at 80 as you are. I have since reduced that to 10-15% and my issue has disappeared. My direction changes where so abrupt that I actually could feel it in the machine. Worth a try and an easy change to make. Start low and if it smooths it out, increase till the issue comes back and find the sweet spot

Once I get some time I will be going back over everything and see if I cannot increase my Speed Factor but for now I am running smoother and much faster over all.

I have since reduced that to 10-15% and my issue has disappeared.

I have tryed this, but with no significant better results. I have reduced till 5% and yes, the circle line is less wobble (not perfect) but this reduce a lot the speed

For the wobbly lines, make sure that the lens is firmly secured in the barrel. There’s still something likely mechanical going on.

I think i have checked everything possible: lens, mirrors alignment, belts, loosed screws.

Now i make a (maybe) stupid question: how can i check if wobble is in X or Y axis? or in both?

Not certain but try running two sets of scanning operations:

Try running these 2 jobs. This may reveal additional artifacts or other clues about what’s going on.

@berainlb Here you are, with 200 speed 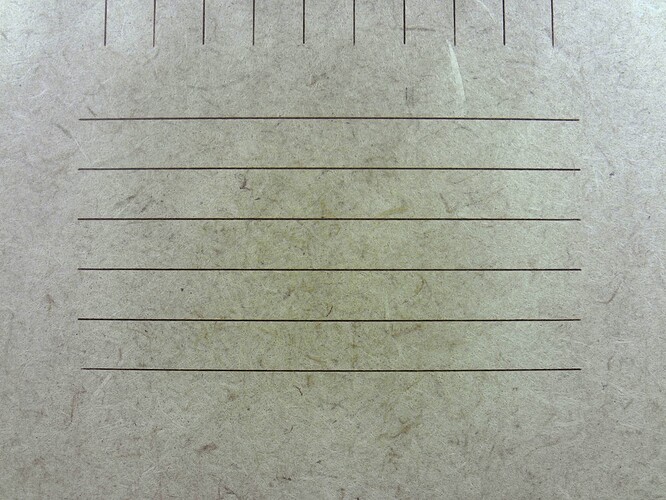 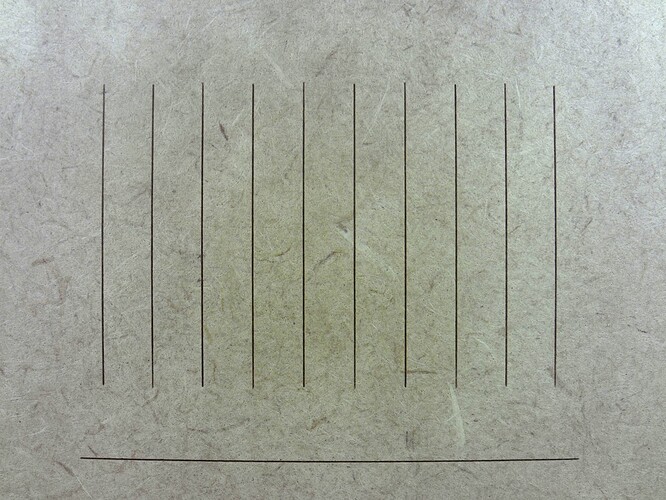 That’s interesting. Try building a spiral made of 90 degree turns. Run it twice, once inside out, then once outside in.

Try building a spiral made of 90 degree turns. Run it twice, once inside out, then once outside in. 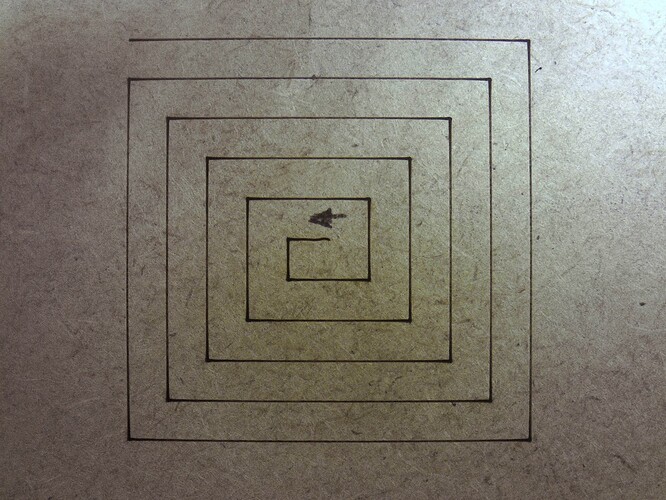 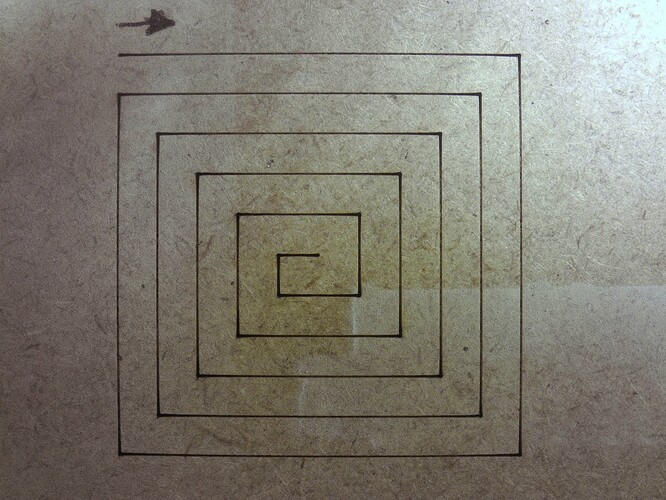 after houndreds messages with the supplier and their “engineers” during last week, I haven’t had a solution yet. They said something like “Oh, ok, decrease speed to 30 mm and the problem will be fixed”

Obiouvsly, this is not THE solution, but only a fast way to say “Problem fixed”: having bought this machine to work (not for hobby) i need it can cut faster than this.

This is what i have checked:

To understand if the problem comes by lens/mirrors i have also swapped a pen with the autofocus sensor and made a test draw with 0% power.
As you can see in the picture below (START in upper right corner, END in lower right corner), wobble lines persist in every circle and also when the head moves from a circle to another one.

I really think it could be a problem caused by a setting value combination of speed, acceleration and deceleration, or a issue on step motor/controller.

I’m really sad to can’t find a solution, and if you have any ideas or something to try it will be very appreciated. 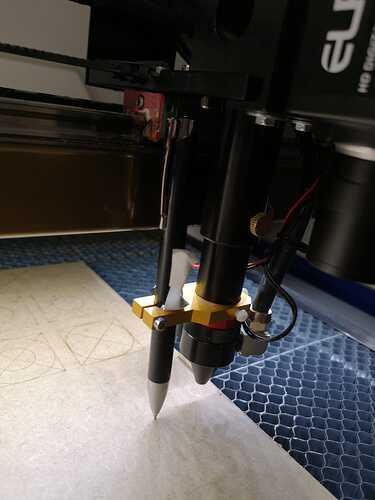 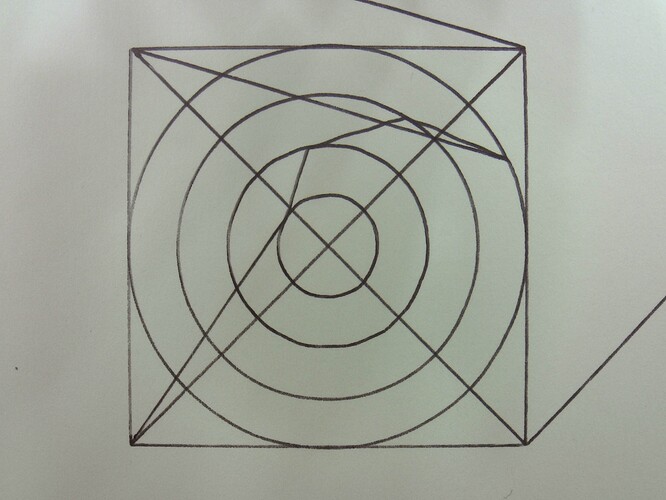