Before the update, I could have one Lightburn project open and open another and another as needed.

Now it seems to only open one at a time.

Am I missing something? 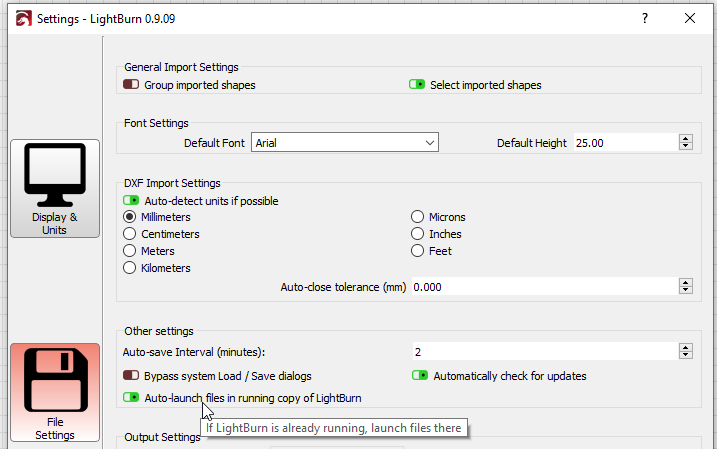 Wait? Are you saying that I can open a second window of lightburn? That would be nice to be able to work on design of another project in the background.

Yes, you can run more than one instance with the caveat identified above. Turn OFF (red) ‘Auto-launch files in running copy of LightBurn’ to allow multi-instance launching.

That would be nice to be able to work on design of another project in the background.

You can do that anyway - once the first one is on the way, you don’t have to keep it open. You can open a new file and start working on it.

Alright thanks guys. Thats good to know. Before Lightburn and Grbl I was using the stock K40 controller with Whisperer and was so paranoid to do anything in the background for fear of a timeout or crash. That board and software was so finicky I was afraid to sneeze in the middle of a job for fear of it crashing.

As long as LightBurn is running, and you don’t do anything that might trigger a device reset, like change settings, it should be no issue. All gcode is built and put into a buffer, then handed to the comms thread, which has higher priority than the application itself. You can load a new file and start editing, do previews, etc, all while the last job is streaming.

I understand that, but what about those of us who can now operate the laser from multiple RDw programs? Can an exception be made for us? Thanks Gene
Sorry if I am a pain…

Are you asking to have LightBurn maintain communication with the laser and all other instances of itself to ensure all this magic just works, no matter what workflow folks might come up with? That is not the way LightBurn works. You can run more than one instance, but only the first instance of LightBurn will talk to your laser. If you want another instance to take charge, you will need to release the first instance’s communication control to the laser.

OR…are you asking to have LightBurn maintain communication with multiple lasers at the same time?

He’s asking if LightBurn can allow multiple instances of itself to ‘grab’ the laser, treating it more like a printer than a network connection, where you acquire it, use it, and then let it go again.

RDWorks does this by only having the comms active when you do something, and then shutting them back off again, so multiple instances do work. It’s a reasonably large infrastructural change to how LightBurn works, but it could be done - I’ve been considering it. It would help for shared use spaces, where many computers might be running the software but only the first launched can talk to the laser.

Thanks Gents. Or would it be easier to have something on the console to switch the connection on and off. I am an inveterate tinkerer and, being retired, I have 8-10 projects going at a time… and I have taught the three peeps who do designing how to use it, so it can get confusing. I am doing fine with RDw after all these years but I have a friend and a granddaughter that I am IT support for. Gene

Would it be easier to have something on the console to switch the connection on and off?

Easier for me, perhaps, but cumbersome for the user, so I’d rather just do it right.

The fact that you ‘just’ want to do it right… is the reason I am here. Thanks Gene

Can you make it so Lightburn can have multiple windows/tabs open at one time? Like Illustrator or Photoshop. Then you still only have one instance of LB open, just multiple documents in the one application.

I’m going to make it allow multiple pages within the same project that all share the same cut settings. Multiple documents with different cut settings is harder - it breaks a number of assumptions we have about how the system works. I might do that as well, but it would mean multi-project and multi-page, both within the same UI, and the “tabs of tabs” might be confusing.

Cool. For me, I tend to work on multiple projects at once. Just thought it would be nice if you were working on getting one setup, then be able to open another “window” with a new file and run that one quick. It is probably a little different for me as I do all of my layout work in Illustrator. So I pretty much just use Lightburn to run the laser.

Just please make sure we can enable/disable that via settings. We run a fairly large venue of retired folks with a shared Boss Laser. Many struggle with the tabs and menus. I can just imagine how confused they could be with multiple “pages” open. I personally like the concept, but have to support those who struggle with some of the computer constructs.

If I read this correct I can not do what I would like to do… I would like to be able to open multiple windows of LightBurn at the same time and be able to communicate with laser from each one. The reason is when I cut my leather items I have to cut multiple weights of leather for the same project. So, lets say I need 5 pieces of 14oz, 5 pcs of 6oz and 5 pieces of 2/3oz. The three weights need to match each file design so the only way to do it now is to load the laser with each weight of leather and cut and then reload, so on and so on without trying to import all the other files into one layout and then it gets tough to rearrange all the color lines to each piece so that the right ones can be cut from the right weight. Its alot of items on the workspace at once. I assume there is no workaround at this time? I understand why you made only the first window work but it would work way faster for me to be able to run multiple windows at once. Any ideas?

You could do this by creating a ‘dummy’ device profile that has the same setup as your controller, but uses Ethernet instead of USB, for example. Each instance of LightBurn that’s open that isn’t talking to the laser would be set to the dummy profile. When you want to use a new instance to talk to the laser, set the current one to the dummy device, then set the one you want to use to the real laser device. It would connect fine as long as nothing else is holding the port open.

It’s a little ugly, but it would work.