I’ve done some searching, and wanted to verify what I think I read.

If I read it correctly, Lightburn can move the cutting table via the Z axis motor during the engraving process.

True or false? If true, how do you map out the curved surface you are wanting to engrave on?

False on your Ruida controller.

There isn’t, not with a DSP controller - most of them only handle 2D moves, and some (like Ruida) will allow Z moves in between, but not a coordinated XYZ move, which would be required to do software-based leveling like 3D printers do.

Okay, that was what I thought. I read a post on another forum dated over a year ago that said the guy was doing Z moves during the program with a Ruida controller. He must have been hitting the buttons and not through the controller.

I wonder if anyone has ever made a curve profile and used a pair of micro switches to move the Z as the gantry moves?

You’re probably thinking of a live-focus head. They exist, but they’re not really fast enough for engraving, and they’re usually more than $1K USD. 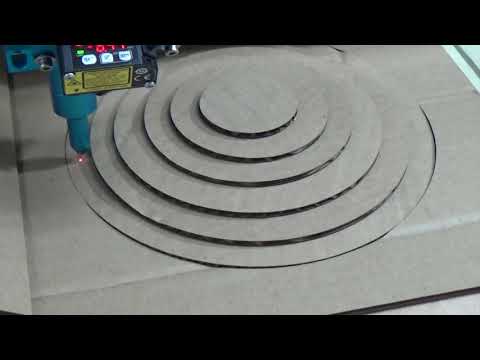 Yeah, and they are not cheap. I was thinking more of a profile the switches below the gantry would follow. Mechanical micro switches would probably have too much ‘gap’ between make and break. I know some of the equipment I work on use a photo make or break sensor, but I’ve never really looked very deeply into their operation. Don’t know if it could be done with one profile, or if it wold take one for each direction up and down.

The things I’m looking at would be pretty flat in X, but have a curve in Y so the engraving scan movement wouldn’t be a problem. The center 3/4 doesn’t have a lot of curve, but the top and bottom edges may have a bit more than a long focal length lens could handle. It’s one of those ideas that if I have the spare time in the next decade or so…

LightBurn will let you split a job into slices, so you could just make several shapes, pick a “range” of Z where the beam will be in focus, and set the Z offset for that range appropriately. If you assume that the focus has a valid range of +/- a couple mm, you could probably figure out how big to make each “slice” of the engraving and do it in sections like that.

Yeah, I could see that for text, not so sure how that wold work for logo or graphics. Kinda funny, Ruida advertises the 6445G as a 4 axis controller, but it will only do X and Y at the same time. If they incorporated a way to map the Z via the pen to create a profile they would be in high demand.

Of could that be done via the print and cut?

Of could that be done via the print and cut?

I don’t understand the question. Print and Cut is a way to rotate / size / position your output to match an existing cut. It has nothing to do with whether the machine can control the Z on the fly.

It was just a thought for lining up the sections of the engrave if I broke it up like you said. Or does print and cut not work for engraving?

You wouldn’t need to run them separately - LightBurn can move the Z to a different height per layer.

Ahhhhh, that’s the piece of the puzzle I missed some where. I just break it into sections, and tell LightBurn to move the Z. I will have to play with that. I just downloaded the trial so I’ll have to hunt for that setting.

It was right in front of me. It’s grayed out right now, I have a 110V up / down button set up until I get the stepper drive installed.

Can LightBurn take measurements via the auto focus pen for mapping the curve, or is it strictly a measure with a caliper kind of thing?

You would need to figure those things out manually - it won’t probe.

Ah well, at least it will do the Z change. Will have to experiment a bit… another project to squeeze between her ‘gotta have’ projects.