Hi, and hoping some one with some with a lot more knowledge on electronics can point me in the right direction.
The industrial laser I used to work with mainly cutting steel plates, used a Precitec system, not sure of the sensor type it used.

Having a conductive Nozzle on my laser i was hoping to even if this is not used as the sensor find a way of tracking the work surface accurately, I have asked a few people they say it uses Dopler Radar, Inductive, Lidar and a a couple of other methods, i can not remember.
The Precitec i used was not reliant on a conductive material to sense, put a hand near it or a pencil it moved away from any object to maintain a set distance.

Is there any modules that anyone could advise to use to connect to an external stepper controller to achieve a similar real time tracking preferably from a conductive nozzle, or even a separate sensor close to the laser output, that can be adjusted to achieve a set distance.

Now, it’s time to introduce the new kid on the block – LaserPro. As with our previous creations, this creative laser can create high-quality, intricate engravings on almost any material. Check out the example show video made by Francesco...

So just putting a shout out if anyone can point me in the right direction, have looked at some of the units for Plasma cutters not so sure and very expensive as well as the sensor being large, Any advise most welcome.

If you want both Lightburn and s Z sensor/controller to control the Z axes, that could be an issue.

There are numerous issues with Z control.

Excluding how you are going to ‘hardware’ interface it to existing devices.

As you noticed it’s always lagging behind the laser head. If the head is going the other direction, it will read a different distance because of the offset of the sensor, same head position. Being on the uphill side of the slope in one direction and the other on the downhill side.

Or you have to delay the lasing until the Z has been adjusted after a move. So the ability to engrave at a specific speed could not be maintained. This might be predictable with a sloping object but has difficulties when the object has ‘hills and valleys’ especially if they become very steep.

How narrow is the ‘sensors’ field of view? To be effective it would have to be less than a mm, I would think.

I’ve looked at some of the ‘heads’ that follow the material. Once I got over the >$20k, cost/each - choke, gag…

I really don’t know how you would interface it into the current systems. These professional systems are running software written specifically for that machine and I’d be surprised if it was grbl. Although possible as grbl is a pretty open and flexible cnc protocol.

Hey, i know this topic is a bit older, but i came here to find out pretty much the exact same thing.
My thought was pretty much some custom engraved skateboards, as the town just got a brand new skatepark and everyones all gungho over boards atm, but they’re curved.

Im not sure how, and have never actuslly done it myself, and im not sure if lightburn supports it, (I’m here looking for these answers… lol)
But i know for circuit board cutting, they generally do a hieghtmap, using a little electric prob. My thought was basically attach a little wire on the side of the laser to clip to, rather than the bit of the router, at the req hieght, then either a thin piece of tin, or possibly wrapping the surface of the boards in aluminum foil to do the height mapping.
This would be simple enough on something such as a smooth lightly rounded skateboard, but probably complicated on a piece with lotsa dips n vallys n ridges etc…

Alas, to resume my hunt regarding lightburns hieght mapping ability, or inability…

Common issue. I know of no lasers/software that will allow you to ‘map’ the variences in height.

Some commercial metal cutting/engraving lasers have an ‘inductive’ sensor that can move the Z axes to change height. Most of this runs on proprietary software, that is usually ‘secret’.

I know of no sensors that work with wood or non magnetic materials.

There is also the issue that the sensor has to be where the beam is to be accurate.

It does seem a closely guarded secret, to how the production machine suppliers track their laser heads, Defiantly very expensive. but awesome capabilities.

I had some years using a machine with a Precitec head

And have always been curious as to what method of detection the system used.
I asked a few people into developing detectors for medical and other industries, and with the speeds and variation in large rolls of sheet steel on a flat bed , they said best guess a Doppler radar system. would be their first attempt if tasked with the issue.
I said So I guess it would never be a cheap option for the Diy build?
And just looked at slow shaking heads as a response.

One elaborated as said traking as low as just a few meters a minute, the system controlling the head, has to work at very high refresh and output rates, with exceptional reliability, and accuracy, to avoid expensive collisions.

So any geniuses minds out there , looks like a small business opportunity for exploitation.
As we see in spark pro they think its a market worth looking into , so we might be lucky in a few years if works well and is affordable.

I examined a laser ranging device that was very accurate. It was general purpose and could detect distances down to less than 0.01mm, according to the manufacturer.

Put in a beam splitter and you could measure exactly where the laser strikes… but is there anything to measure by then…?

The other issue you touched on… how fast can you move it and how to detect these variations in enough time to have some kind of avoidance system.

The only experience I had was with an inductive analog sensor that drove a servo to move the z axes. I got a day course on it, but it was an ‘optimum replaceable unit’ (ORU) meaning to cheap to fix or so difficult, it needs to go back to the factory to properly fix it. I do remember the servo running very ‘hot’…

Sounds like a good job for an AI machine that can just ‘see’ the surface all over the machine. Either scan it before running the job or make the scan are ‘around’ the head as it’s running…

Hers a vid of of hieght mapping just using grbl control.
lots for candle etc too.
Would be very easy to rig this up, (Set hieght, pice of coat hanger attached for a rod etc.) however Im not sure of lightburns ability to do so.
I know Candle supports it as wel, but i belive its more of a router thing than a laser thing, which may be why it seems so elusive here. 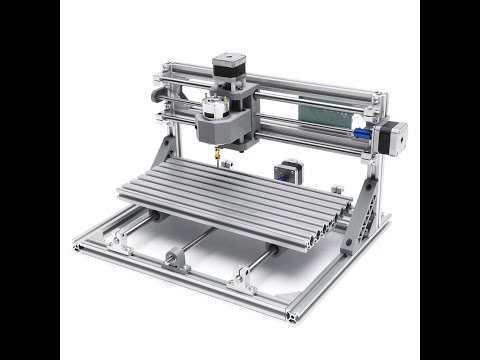 Lightburn is a 2d design tool in it’s designed form. It can handle some Z controls but it’s limited compared to that type of cnc.

The mapping is applied to the generated code by the software.