Alignment or something else driving me crazy!

My guess is the ‘this side up’ label is there for ideal water flow. It obviously should be followed but I don’t know how critical it is or what damage results if flipped over. It does show that who ever assembled the tube wasn’t paying attention and leads you to wonder what else they got wrong.

On the rolling plasma video, my tube doesn’t do that and also doesn’t produce the ring. But I don’t know if the two are connected in some way.

I looked online about this Arcing, most say it’s because of cheap Chinese tube. But my tube is EFR, F4 which is supposed to be a good one.

Some say use Deionised water in the cooler will solve it…I changed the water, is the same.

I hope you have not driven much with the wrong built-in tube. Most likely there will have been air in the tube which has not had a chance to get out. This air can become overheated which is not good for the tube.
The laser that dances round I have seen before, but not so much. I mean my first 40Watt tube has had it but only in the lower power stages.

Mainly what does tube damage is heat, generally speaking. If the tube doesn’t allow proper water flow when it’s incorrectly installed, could cause your issue. I have a flow meter on mine to keep an eye on it…

If someone else installed it, I’d go back to them. It was clearly not installed properly.

use Deionised water in the cooler will solve it

Glass is a pretty good insulator, but because of the very high voltages it’s advised to use a coolant with a low ‘dielectric’ to prevent any arcing. The reality is that deionized water is not low cost. One of the drawback is that if it’s exposed to air it quickly become ‘distilled’ water. I’ve run mine with distilled water since I’ve gotten it.

My machine runs between 22kV and 28kV depending on the power.

It appears to peak around 35% power.

People run into this when they try to keep them from freezing with antifreeze. Most of the time that really lowers you dielectric.

People run into this when they try to keep them from freezing with antifreeze. Most of the time that really lowers you dielectric.

The original liquid was tap water with antifreeze in it, are you saying this is ok or bad?

Anyway it seems I have to buy a new tube.

Unfortunately, it does not catch or indicate air bubbles.

Counter to Jacks point I’ve used straight RV antifreeze for many years with no problem. I’ll admit that it might not be ideal, but I’ve seen no issues. This implies that all antifreeze solutions are similar, but that’s probably not the case.

The better chillers have flow alarms so I don’t measure my flow, but trust that the power supply will quit upon an alarm.

I think small bubbles form in all tubes but are so far from the heat zone they shouldn’t cause any problems.

Since assembly came up I just wanted to confirm that water is entering in the rear of the tube and exiting out the front?

Finally I wouldn’t give up on the tube yet (unless you run a business and don’t want to mess around). I’d experiment with different powers, temperatures and coolant to see if you can turn a ringed shape more normal

I run propylene glycol at 50% with distilled water. It is always flowing tiny bubbles. Supposed to be good down to 15 F.

The bubbles don’t stick to anything and flow properly. I know what they all say, but there are many forms of ‘bubbles’…

What makes water conductive is all the other ‘stuff’ in it… In California at the beach, they commonly sprayed the HV mains insulators with distilled water to get the salt off of them…

All the data shows regular antifreeze makes it worse…

Hi Neil,
when you fire the laser in the BL corner (i.e. closer to the laser source) you said you get two centered dots even if you move the Z by 4-6cm. Can you please confirm that?
Yes, your alignment is OK for a 1200x900mm machine but it could be slightly better.

In the corner closer to the tube output, try to see if you are getting a nice dot there with low power and short burst, and then again with a higher power, still short burst. You can use thermal paper (from some receipts) to see exactly how good the laser is firing in the 4 corners.

Changing the tube is always a possibility (costly) but if the issue is the alignment, a new tube will not fix this.

you said you get two centered dots even if you move the Z by 4-6cm. Can you please confirm that?

This quote was refering to trying to get a focused dot, the same size as the one that is produced in the FR.

But i think you are asking if my vertical alignment is good, and yes it is, 7mm fire a spot, move bed down 250mm fire again, spot is in same place (bigger of course)

I have sent the video of the tube arcing to the manufacturer and they say the colour of the laser beam indicates the gasses have leaked, or something, and that’s why I’ve lost power…BUT…I haven’t really lost that much power (not yet anyway) I can still cut 9mm MDF pretty well, yes I have had to increase the power to cut in that corner, but it’s more like there is a glow around the beam, like ghosting, that is producing a slightly more burnt surface…is very strange.

I think a new tube will be required soon. What annoys me the most is I bought the tube from the supplier I originally bought the laser from, but he bought the tube for stock (as he sells them) back in 2020, so the 12 month warrenty from the manufacturer has run out, even though I have only had the tube for 7 months and it’s done under 500 hours. I told this supplier basically he sold me a 2nd hand tube, but he is a sh**head and will not replace it.

Is your supplier an authorized reseller? If so, wouldn’t warranty period start from sale to retail customer? If not, then I agree that he sold you something as new which was effectively 2nd hand or closeout. Hope it was heavily discounted.

Normally, warranty is based on purchase date with proof when you bought it or some date stamp on the product without proof. However I think the concept of warranty is a retail thing and less embraced by Chinese manufacturers with no stores in the country.
Last fall I bought a Cloudray tube from Amazon which means they should stand behind it for a while.

Apparently he’s not an authorized re seller, and therefor just someone who buys stock and sells it on…Heavily disscounted LMAO, more like he charges double the price I could get it direct…you live and learn I guess.

Most sites that speak about replacing tubes warn about using vendors who ‘stock’ tubes as they naturally ‘die’ over time, with or without use.

As you say… We’ve all been in that boat.

We’ve all been in that boat.

That we have, Had a brand new 60w tube that i bought 2 years ago and it sat, by the time i got around to making my machine is was dead!!!

Don’t know if this will be of any help but lots of useful stuff on this guy’s channel…
[https://www.youtube.com/user/SarbarMultimedia] 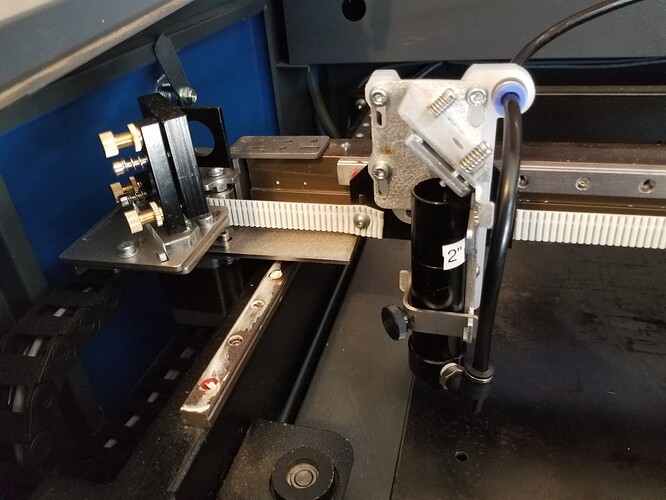 I am buying a new tube, Direct from EFR in China. They are a high rated supplier like Reci, but unlike Reci do not seem to suffer from so many fake copies, and being able to buy direct from the factory is a big bonus imo.

They basically do 2 types of tube F series (general) and X series (industrial) Now the X series is more expensive BUT it is slightly smaller than the F series (and a better tube), because it’s smaller the shipping is much cheaper and overall the X series comes out cheaper, and also the X series has an 18 month warrenty (F has 12 month).

I’m paying 715usd (about £550) for new tube, from factory, delivery in about 10 days direct to me, 18month warrenty, X series industrial 100/130w. Cannot get better or cheaper on Aliexpress.

No dealing with Aliexpress, no guessing what your getting.

BUT it is slightly smaller than the F series

Part of how much power it can put out is the physical size. Mainly because we use DC to excite it…

My tube is on a 50watt machine and it’s 880mm long and produces 44 watts. There’s about 120mm under what a 50watt tube should be and is reflected in the lower power it produces…

What makes it industrial?

How much smaller is it?

Sorry, just suspicious of the claims…

In the US it is preferable to buy from someone who stocks product in the US to avoid international shipping costs and to avoid having to directly deal with US customs. In this country laser products are regulated as medical devices and require certain approvals to enter. I’m sure in the UK it is different.
Also changing the shipping cost based on the length of the tube, which can’t be much, doesn’t seem right. At any rate good luck with your project.