Max/min power settings for cutting through lightburn. Curious what people commonly use for settings on small intricate cuts. I was reading the lightburn manual and it discussed how if you have the min at 10 then it will help minimize overburn - ie “Min Power is used for cuts where the head will be changing directions, slowing down the speeding up again, where you want to not over burn the corners.” BUT, on the other hand, I have issues with cuts where there is a little “gap” on the cut area left where the cut starts stops. And no I don’t have notches turned on. And in poking around in the forums I read that when I have those little “gaps” it can be because the laser isn’t firing hot enough at those edges and to solve that make your min and max power the same. (ie (ie post like this one: Small gaps where laser starts and stops each letter, any suggestions - #7 by DarrylG)

Soooo… is there a happy compromise that most people settle on? Is there a best approach? Obviously I don’t want to have all these notches that leave a jagged piece behind when I punch them out, but I also don’t want more overburn on my pieces than necessary as it is more effort to scrub/sand clean. Is it just about dialing into an inbetween #? Am I understanding correctly what min power does, and what issue is with little areas left behind?

On a Ruida controller (for example) the power curve representing how min and max power function relative to speed, if it were drawn, might look something like this: 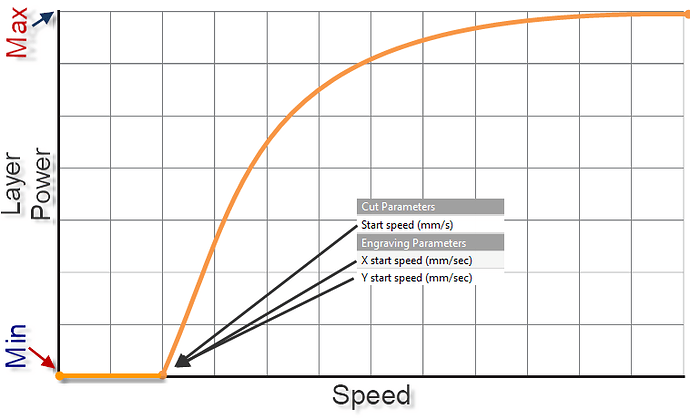 What is important to note about this is the configuration of the controller allows for setting the start speeds (either for Line Layers or for Fill / Engrave layers). The start speed is speed at which Min Power value is used on a layer.

Some controllers (like the Ruida) allow the configuration of those acceleration settings independent to the layer type.

on the other hand, I have issues with cuts where there is a little “gap” on the cut area left where the cut starts stops.

This is most likely caused by a min power setting that is below the laser tube’s ionization point.

It’s called the ionization point of the tube, and it’s a properly of glass tube CO2 lasers. The minimum firing value tends to be roughly 10% of the wattage of the tube, because bigger tubes need a bigger kick to fire them. There’s a setting called ‘Engraving mode’ in the machine settings that you can change from ‘Common mode’ to ‘Special mode’ - with this setting, the tube is given a higher power kick for just a moment, and then the power is backed off, because it takes less to keep the laser …

On the Ruida controller, there’s a controller setting called “Start Speed” that defaults to 10mm/sec. At that speed, power starts ramping up from Min Power to Max Power. Cutting at or below that speed means you’re using Min Power only, so if you’re cutting slow, set both Min and Max power the same and you’ll have no issues.