Just curious not that I doubt your reasoning but if it always worked for a year then suddenly quit what does switching the wires around tell us? I’m just trying to learn as I go. To see if the pin on the board is bad ?

Amazon just dropped off my new switches. Should I install them?

Ok the picture is oriented to the way it plugs into the board. From left to right.
Hole 1- empty no wire
Hole 2- y axis
Hole 3- x axis
Hole4- two wires (ground)
Last hole empty

I don’t see any breaks in the wire and they all test with continuity. The Y switch when continuity is checked I get tone when I press the switch in it stops so I’m assuming the switch works. 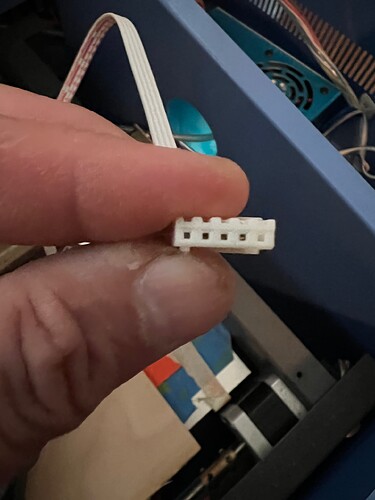 Go ahead and install the new switches. Then run the M119 test. If the results are the same as the last run can you try swapping the X and Y pins at the connector and test again?

Headed home from the gym I’ll get them limit switches switched out.

Same thing, has to be the control board I have a new one coming. Must have been a coincidence that when I moved it by hand it pushed that bracket in and shorted it out. All I can figure.

So
Do think the board shorted out?

What were the results of the M119 test? Did you test with the X and Y pins swapped?

I don’t want to add to the confusion but I have a question regarding the meter checkout. Did you do the meter checkout with everything still? I would check again and move the gantry to see it the beeps stops. The wire might be broken and in a bend and be touching and check ok but when you move it the wire might disconnect and the beep stops before the switch actuates.

I have the wire and switches removed from the machine. I would not mind just replacing the whole wiring harness but can’t find one. Looks like you have to but the components and build it yourself. I have not switched the wires yet ended up with company but will try tomorrow.

What were the results of the M119 test? No status change for X, toggle for Y, and no change when both X and Y are triggered?

Unchanged the results are unchanged

I ordered a cohesion 3d board should be here later this week. If that don’t fix it I would guess it’s mechanical

It would be good to validate that the source of the issue is the controller. If you can confirm that X-min cannot be toggled then that pretty much isolates it to the controller.

However, if you can get it to toggle that suggests that there’s hope yet.

Got it connected still acting exactly the same. New switches and new board. Ugh

Are you able to FaceTime video or FaceTime? If I can’t figure this thing out I’m going to part it out and throw it in the trash.