I’ve read the following thread - Laser test fire controls in LightBurn - but it doesn’t help with my current issue.

I’d like to set up a foot-switch using keyboard shortcuts to test fire, and cycle start my diode laser. The task in hand involves numbering parts 1-88, and as they’re all slightly different they have to be lined up manually before engraving. All the parts are the same thickness, so using an external laser pointer as an aiming spot would be possible, but seems rather clumsy given the ability to fire the diode at low level to aim it is built in!

Leaving the foot switch concept out of the picture, how do you anticipate this alignment procedure to work? I’m trying to understand how you see this working and then working in how a foot switch would assist in that.

I suspect based on your specific needs there may be an easier way of achieving what you’re trying to do. A general description of the numbering job would be helpful as well as a photo of what you’ll be working with as well a screenshot of the design. 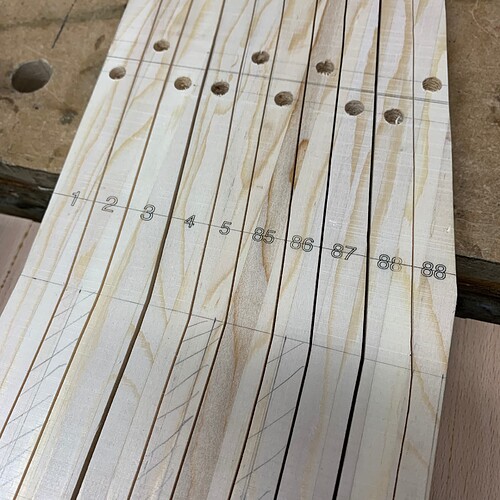 I’m numbering piano keys. Attached pic shows a rough practice piece (thus the uneven widths, and different font sizes/power settings I was testing!). Although the keys look similar, all 88 are different widths and angles, so it’s not possible to set up a jig to locate the parts.

My plan was to centre the laser on a pencil line, then mark the part. Foot switches will speed the process up no end, as the mark itself takes about two seconds, so having both hands free to move the keys into position would be ideal. Variable numbering is being used, fed from a CSV file.

Normally a much larger laser would be used, and the whole keyboard including cut lines would be marked out in one go. I’ll be marking they keys is batches of about 11, as that’s about all the space I have in the Ortur to leave a central working area.

Foot switches will speed the process up no end

Are you using “Current Position” for Start from? With Job Origin at center?
Is your alignment process to press “fire”, align laser to center of line, then start job?

What function would you expect the foot switch to activate? Is it the fire function plus the actual job start?

Spot on! Fire low power laser to align, then run the job, which is set with origin in the centre. Hoping the whole process will take about 5 seconds.

Alt-S will run the job; I just need a way to fire the low power laser…

You’ve clearly already put some thought into this.

I don’t know if there’s an unpublished shortcut for Fire but I somehow doubt it. And LightBurn now has no provision for scripting multiple actions, any automation, or any API to tap into currently.

So if you wanted to make this happen you’d have to do it externally from LightBurn. There are many UI automation tools that could be leveraged to interface with LightBurn to press Fire. So you have a multi-layer solution:

If LightBurn did have a keyboard shortcut for Fire then this could be dramatically simplified as long as you were using discrete switches for each function.

Many thanks for the leads; I’ll look into those when I get some time!

The foot switch is basically a programable keyboard, and can handle single and multiple key presses, and also strings of key presses.

Of course if Lightburn has a hidden option to fire from a keyboard shortcut, that would be the best option…! I’ll let you know how I get on in due course

@Adypiano Good news. Shortcuts are available for the framing buttons.

Take a look through this topic:

Hotkeys for both Frame buttons including Shift modified LightBurn Software

I have LightBurn operating on a 1280 x 800 tablet running Linux and by setting the app icons to large and app font to 15 things are touchable with pretty fat fingers. But what I can’t do is trigger the Shift-Frame button action to get the diode laser to frame in low power/fire mode. A hotkey combination would allow me to setup a gesture to perform these framing/fire operations.

Thanks for the link! I’ve given that a try, and it does indeed work. However, I find the framing really difficult to use for this job; a simple stationary spot would be so much easier! I’m dropping Lightburn a message to see if there’s something hidden in the software that isn’t listed in the instructions…

Request to add diode low power laser fire keyboard shortcut has been sent to the devs; it has been added to the requested features list. Hoping they’ll have this sorted by the weekend!!