I imported an image, did some editing, then I clicked the negative toggle and nothing happened. I even tested it to see if perhaps it didn’t show it for some reason and would print negative. This isn’t a photo either, it’s a plain black and white line art image. I tried inverting the image in another program before bringing it in however whenever I do any editing in lightburn it flips the color even though the negative toggle is off.
Any advice would be very appreciated.

Same image, top (black layer) has the ‘Negative Image’ flipped On (green) and the one underneath (blue layer) does not. 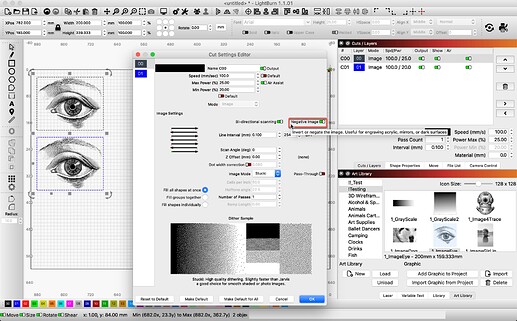 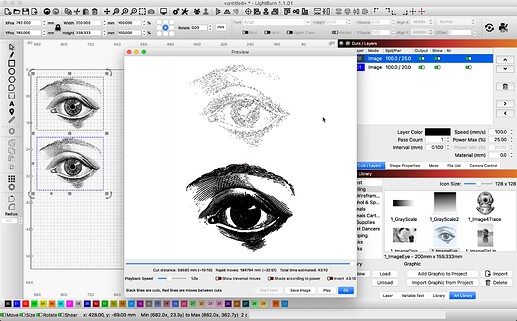 Hmm. Doesn’t seem I explained that well enough.
If I take this image and click negative on it, nothing happens. I’ll post this after this burn I’m running currently.
But that’s not the really weird thing that is going on. If I make this image a negative as seen here: 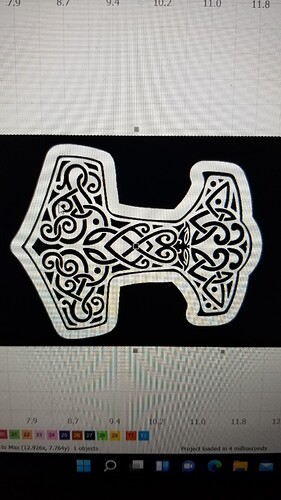 Trace it in order to remove the unwanted black square around the outside. 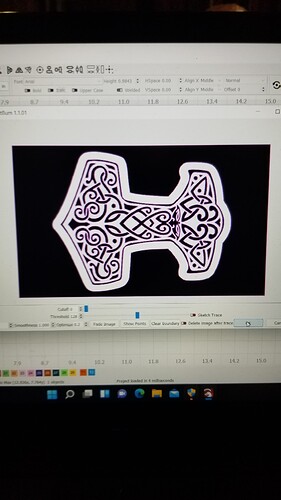 If I remove the black square, the image inverts. Here I am removing a section as an example. 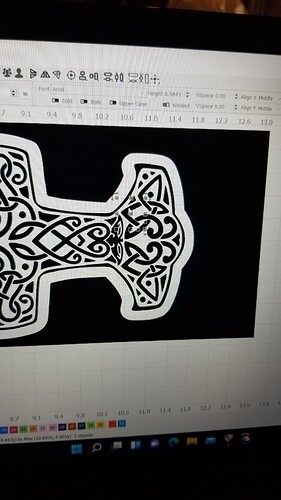 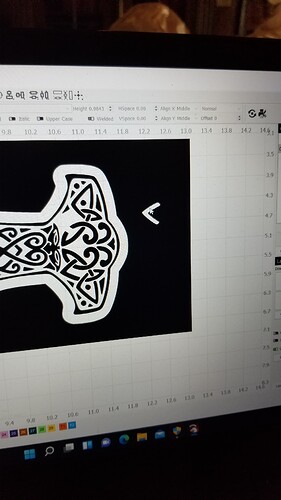 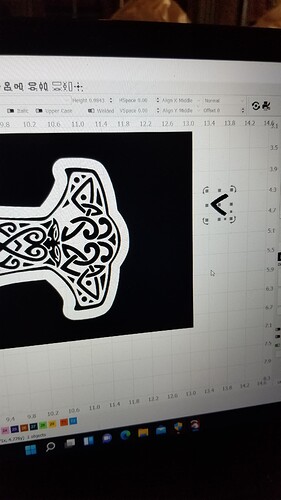 For some reason, it inverts.
The only way I found to get around this is to invert the image using another app and then flooding the black square. But this is cumbersome.

If you take an image and negate it, LightBurn will automatically negate the preview for you if that’s the only thing in your project. Is the preview showing the Invert button enabled?

You said “this image” but didn’t let the upload finish, so we can’t look at the file yet.

Here’s a better example of what’s happening when I remove the black square. Either it goes jet black or reverts back to the original. 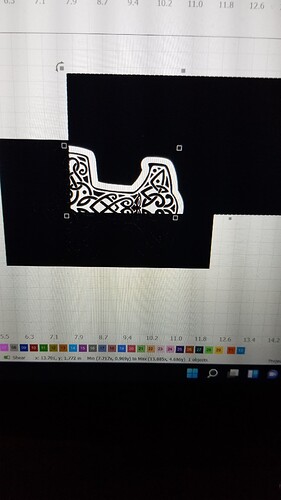 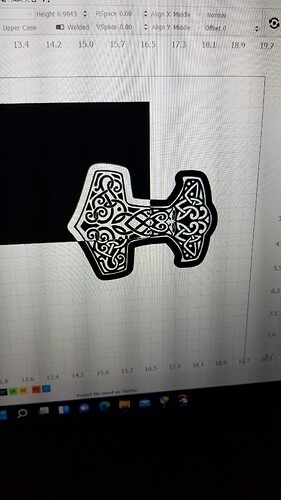 I noticed that and corrected it.

There are 2 separate things going on that are being conflated.

Once it’s a vector, yes, of course removing the outline inverts it. That’s how vector fills work in LightBurn - Each edge encountered toggles the fill. Read here: How do I invert (negate) a vector engraving?

For the image, I can’t see enough of your screen to tell what’s going on.

An image WILL invert when previewed, but if you invert it, the preview might also invert automatically, which you can easily turn back off again. 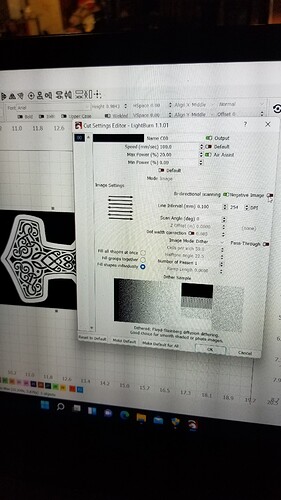 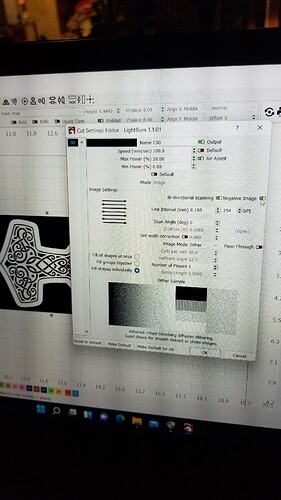 Unless I’m wrong, but nothing seems to be happening.

Nothing happens in the edit window. You have to preview it.

Hmm. Let me try explaining it this way.
If I take this image and click negative. It still cuts as the image as is, not as a negative. 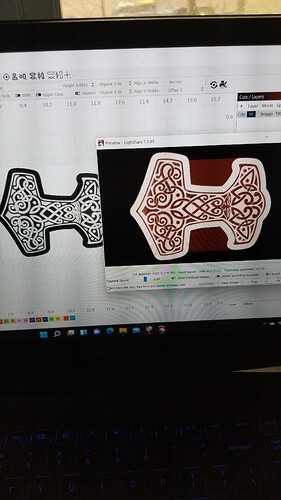 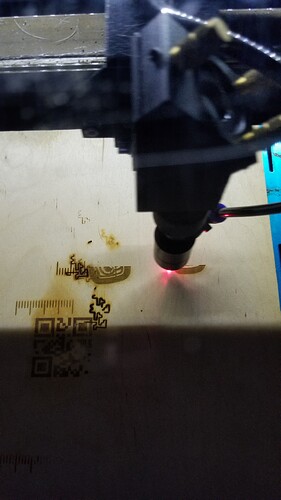 Can you post the .lbrn file here for review? Will simplify things. 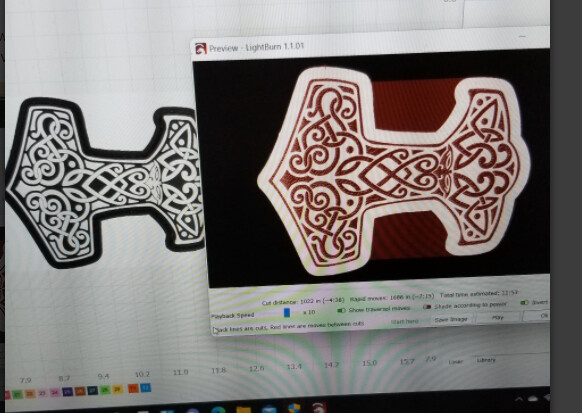 is not the same as this: 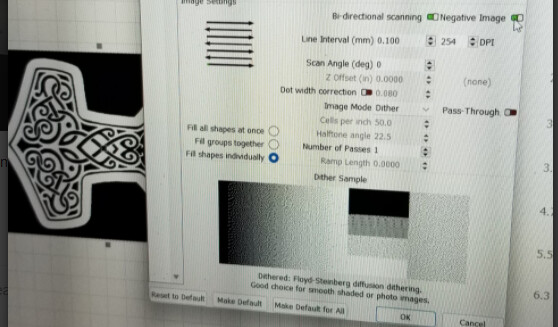 Can you attach the image?

Here’s the image I wanted to burn as a negative. 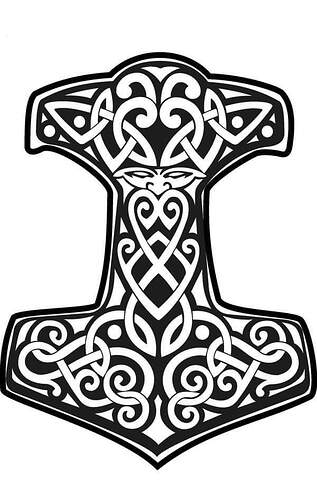 Yes. They’re not the same. I’ve attempted to explain this issue multiple ways. First is when the negative image is traced and the black square is removed the image either turns black or inverts.
The other is where I attempted to make the image a negative in lightburn and it won’t.

So, try this: duplicate the image, put one on a different layer. Set one layer to negative, and one not. Do they output the same?

This is a preview of me doing exactly that - the right one is negated: 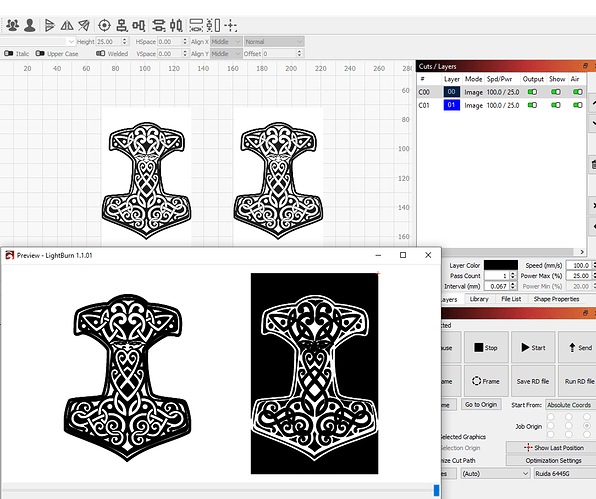 I think you have two different issues, and you’re confusing yourself, maybe. If you negate the image, you’re going to get a black rectangle around it, because the white background inverts too. If you want to leave the outline of it alone, but invert the inside, you have to either add a line around it, or remove one, to flip the fill. In this picture I’ve traced the one you posted, and added a narrow offset around the outermost line - it’s the one on the right: 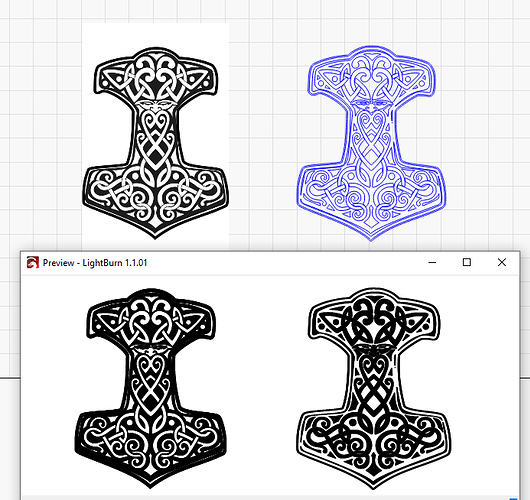 Same thing. It shows it inverted in the preview, then burns it normally, not inverted.
However if I import an inverted image, trace it and ungroup the trace, remove the surrounding square, it also reverts back to the original image. Something is screwy. I’m going to uninstall and reinstall the software.

Uninstall / reinstall almost never does anything.

You’re saying BOTH images show the same on the Ruida when you run one in negative, and one not?