Origin is a mystery; bad noise when arm moves

the laser responds to the “home” button by going exactly where it should, as shown below 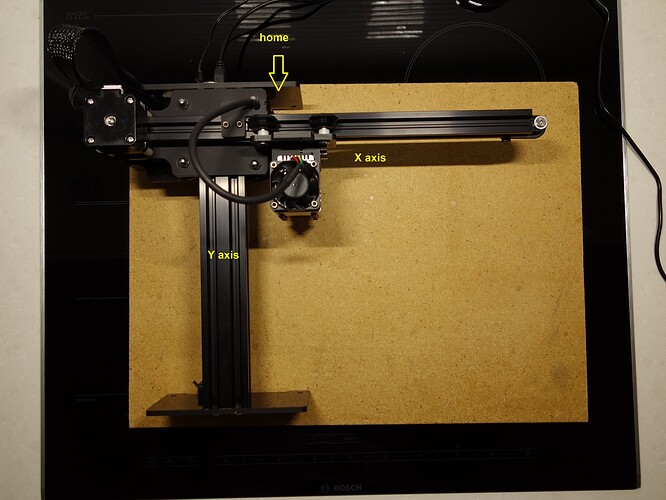 but when i choose “origin”, this is where the laser heads off to (with vile noises that i can’t reproduce in a still photo), before crashing into the barrier where the arrow points 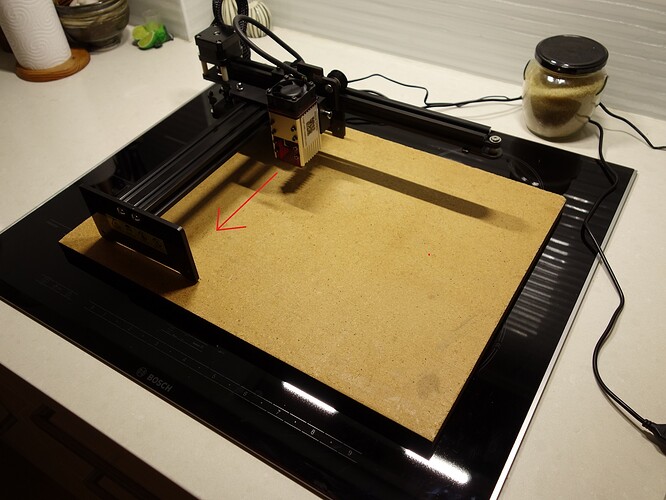 it would seem i am in the same dilemma as the original post here : Light burn neje 2 axis problem motor noise

the crash may be because the laser module is actually larger than the original iteration of the master 2s, and the extra 1cm of space required doesn’t exist, and as such the working area has thus become truncated to x=170mm, y=160mm

the noise i can’t explain, but wonder if the speed of transit is somehow responsible, although the head doesn’t move any faster than when it is quiet framing a defined area

if i get the idea correctly here, then if the origin is 0,0 i will have to recalibrate due to the larger laser module, to accommodate clearance. and home would be (using the same relativity) actually be at 0,160

which raises these questions towards solving my problem :

even when i ask it to frame the project, the initial excursion to the co-ordinates makes the same horrible noise, but after locating said area, it is buttery smooth and quiet outlining the frame

under the neje software it sprints to a defined starting point without any juddering at all… and no, i don’t have both programs open at the same time - lightburn has this issue as the only program open after booting the laptop driving the device

hope that clarifies where i’m at; further assistance is most welcome

i can see the potential, and i’d love to use it

i have the same problem with the master 2s pro and the 440x250 area. after i update with the 3.7_update it corrects automatic the area to 420x250 and now it works fine.
https://neje99.com/neje-grbl-uploader

how do i tell the console to reprogram “origin”

Are you talking about using the “Go to origin” button in Laser window?

Origin position is user-defined. Just push clear origin and set a new origin where you want it. My question is, what are you doing in your workflow that calls for origin?

If the noise is what I think it is it’s not from pushing the button, it’s because the laser has crashed into the frame and the motors are continuing to attempt to forcefully move the laser head more but cannot. This can damage the motor if done too much.

Now, the real problem is because you have effectively reduced your available area but have not made any accommodations to adjust for it.

thanks for the reply, but the machine seems to be perfectly functional now (this post is old)

i may have indeed used the $131 command to define it, but such cleverness is now lost from my poor memory… indeed, the limits are now at 170 x and 155 y which comfortably accommodates the workspace available allowing for the “fat” laser

many thanks for your belated input; i am reluctant to alter anything given there is no longer any problem to address

my understanding is increasing, but most of my effort is now dedicated to using the powers of lightburn via the interface rather than attempting to unnecessarily utilise the command line options

i know that’s a pretty facile approach, but if it ain’t broke…

ps. the noise at the limit was preceded by an equally “wrong” (though different) noise in transit, as if the motor was having some problem well before the mechanical barrier of the frame compounded the problem

Ah. Didn’t notice that @Stupsi was bringing up an old topic.

preceded by an equally “wrong” (though different) noise in transit

Probably the motor skipping steps because it was being asked to move too quickly due to speed settings being too high.

Probably the motor skipping steps because it was being asked to move too quickly due to speed settings being too high.

possibly, but without altering anything else, once the framing was working correctly it didn’t ever make that noise again, and when it was making the noise, the movement was not very fast at all

a mystery that no longer requires an answer