Hi all.
Im having a bit of an issue with my machine.
When I do a raster then cut the machine jumps/skips so the cut no longer outlines the rastered image, it’s sometimes does the same for a raster too I have linked a video to try and give an idea of what I’m talking about but it isn’t the best video as I didn’t want to open the lid while the laser is on.
I’m using lightburn to control the laser if that helps.
Any help would be appreciated.
Thanks
Paul

What would help most at the moment is a description of what sort of “my machine” you are using.

There’s no video link, and no information about the machine you have in the post or your profile - we ask people to fill out the ‘Machines’ section to save us having to ask all the time.

Hi mate, I’m using a k40.
I did try to post videos but they were not supported.

With what controller? If it’s a Cohesion3D, are you running Smoothieware, and if so, which version? There is a newer one that supports much faster raster speeds than the original (240mm/sec instead of 80mm/sec). The stock Smoothieware starts to slip if you go too fast when engraving dithered or grayscale images because it can’t process the commands fast enough, but simpler stuff is fine.

Yes I’ve got the cohesion board running smoothie. But I’m not sure what version it is, I’ve looked on the board but can’t see anything stating what version.
The machine does stutter a bit when doing a photo, if I’m doing a raster then cut it oust the cut in a different place instead of around the raster.

If you’re doing a photo using the default settings for DPI, stock Smoothieware will skip if you go faster than 80mm/sec.

This version increases that limit to about 240mm/sec:

You might also need to increase the motor current settings in the config file on the SD card, but start by checking the firmware. Do you have a Cohesion3D Mini, or a Cohesion3D Laserboard? (the Laserboard is newer)

I have the laserboard.
I was told that the card with I got with the board was read only so can’t be edited.

Told by who? Highly doubtful it was C3D.

I can’t remember who it was it was in one of the k40 groups I’m in it was anyone from C3D I don’t think haha.
I’ve just got that bin file from the link you provided, do I just drag and drop that onto the card.
I’m new to Co2 so not sure what to do, I originally gio lightburn for my eleksmaker.

They have full instructions there - copy that firmware.bin file to the SD card, then put the card back in the board and power it up. There’s also a setting in LightBurn to change (there’s a screen shot on the link above).

The Facebook groups are full of people who are incredibly confident in their answers and are also mostly wrong. Here on the forums, if someone posts an inaccurate answer we can correct it or remove it. On Facebook it lives forever and confuses people, which is why we try to get people to come here first.

OK mate I’ll give that a go.
Thanks for your help its really appreciated.

Facebook is full of expert in the field of knowing nothing isn’t it haha.
Thanks again mate I hope this works haha

I saw a video on FB of cutting circles and the laser skipping in between them. That’s the acceleration setting, possibly using too low a current setting for the motors, and possibly having the ‘default_seek_rate’ set too high in the config.

Hi mate.
You don’t have a link to that video do you, sorry its took a whole to reply I must have been asleep haha.
I’ve followed the steps above and I’m about to test it again but the video would be helpful.
Thanks
Paul.

Hi mate, sorry to bug you.
I copied that link from above but when I try to copy it to the disk it’s says the disk is write protected, it gave a skip option so I click that and something went on the disk but I’m nit sure if the full file went on.
I’m not sure how to remove write protection and if the thing that did loyad onto the disk is the full file.
Any help would be appreciated and again I’m sorry for being a pain haha.
Thanks Paul.

Sorry I forgot to add images to this so here they are, this is what it says when I try to copy to the card (1st pic) the second pic is what I on my card after I pressed skip when copying it. Is that normal or was that on the card before I did anything.
I put the card back in the machine but only two of the green led flashed. So I’m not sure if It worked, I did change the seeing in lightburn and did a test but the same thing happens. 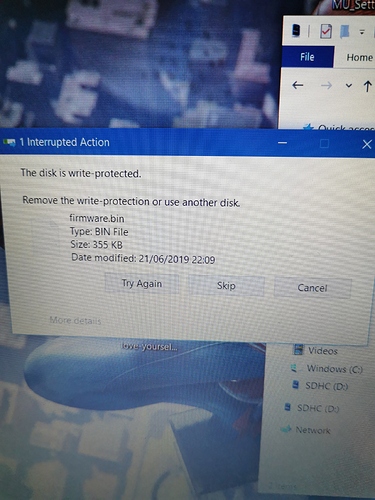 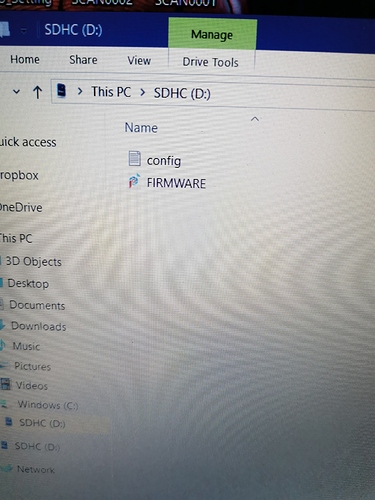 You don’t have a link to that video do you

No, but it was the video you posted to Facebook.

SD card write protect is a slide switch on the side of the SD card itself:

Hi mate.
I’ve just moved the little switch and it asked if I should copy without properties so I clicked yes, I hope that is right haha.

“No need to go to the forums” he says, but you got your answer faster here, and the forums can be Google searched, unlike Facebook. I’ll never understand why so many people hate the forums so much.

I don’t hate the forum, it just never comes to mind when I have a question, I will still ask here though.

I didn’t mean you, I just didn’t like the other guy’s wording - “See? No need to go to the forum, would probably take days to get an answer!” yet you got answered here immediately.

I would say easily 70% of the answers to questions about LightBurn on various Facebook groups are wrong, but there’s no way for me to keep up with it all and correct it. I wish people would come here first, not just after they’ve given up on getting an answer on FB.

I will come here first in the future, I’ve added this to my homescreen so I know where to go first and it will be harder for me to forget about the forum.

Thanks for all your help mate, it’s appreciated.