Swapping Controller cards in a FS?

Hey guys! I have two FS lasers that have bad CPU in them. I got a quote from FS and I REALLY don’t want to pay the “upgrade” price they have given out. Does anyone have any experience with putting a different brand card in a FS? Would it be the same as any other card swap? I’m just looking for ways to save my babies. D:

Not sure which version you have, but it’s been done: http://rasterweb.net/raster/2018/05/04/cohesion3d-mini-full-spectrum-laser/

At their core, almost all CO2 lasers are:

The motor drivers, laser, and water, and door switch connections are usually trivial. The limit switches, depending on type, can be a tiny bit harder, but even those are usually straightforward. The most time consuming part I’ve found is getting the homing correct, and transferring the motion settings, like step size (steps per mm), speed and acceleration settings, and so on.

If your existing controller exposes those settings to you, take screen shots of everything you can, and take photos of all the existing wiring connections.

Depending on how well labeled the original machine is, a full controller swap might take as little as half an hour, though probably more like an hour or two if you’ve never done it. Getting the homing setup and motor directions and step sizes is a bit of incremental fussing that usually takes 15 or 20 minutes, and then the speed tuning is a bit more after that, but by then you’re usually cutting and testing.

If you’ve never done it, plan for it to take a day or two from start to finish so you aren’t rushed, and have time to ask for help if you need it.

I probably should have mentioned that they are both ProLF 36x24. They are older and as a result FS doesn’t support the Stellaris boards anymore. From the post it looks like there might be some general re-wiring that has to be done. For the stepping, speed and acceleration, would I be able to use the same setting on the one FS that still runs?

If you’d like to send some pics of the electronics inside your machines I’d be happy to take a look.

Oz, thank you for confirming. The controller cards that I would like to put in the FS do not mention if any of that would need to be changed. I guess I will take it as it comes at me. Is there a way to know if the new controller cards are not compatible with certain motor drivers?

Ray, I can arrange that. the FS all have the stock parts from when they were bought. The TC-410 has had some swapping done by myself, but so far just the power supply and the controller card. Do the picture go in the thread or is there somewhere else they go?

The only real trick with the motor drivers is making sure that you don’t run too much current through the steppers. They can run pretty hot, shouldn’t need to, and they should never be so hot that you can’t comfortably touch them for a few seconds.

There are two main types of controller: ones with internal (on-board) stepper drivers and ones with external.

For most steppers up to Nema23@ ~2.5A on-board drivers are fine, such as you would see on a TinyG or Smoothieboard or GRBL-based board.

If your existing controller is on-board, it would be most economic to replace it with another controller with on-board drivers.

Luckily, we are now blessed with a huge range of stepper drivers from budget to outrageous with various benefits for each. One of the benefits is a software-set driver, which can adjust the stepper power automatically. Overheating of steppers is less common in a laser where the gantry and head are pretty light than it is in something like a CNC router where the gantry can weigh tens of kg. Typically a quality NEMA23 stepper has a service rating up to 85-90C which is very much too hot to touch, What feels ‘too hot’ is often no more than 50C and well within the capabilities of the system. I wouldn’t worry about it unless you find you’re missing steps.

My home-built A3-sized laser uses a TinyG and it’s just great. I use it through a wireless interface.

My K40 has a Smoothieboard which has built-in networking (Ethernet) and decent drivers - more than enough for such a small machine.

Setting up and calibrating isn’t hard, but you need to document your build thoroughly as you go along so you know which pins go where.

Calibration is mostly knowing how far the transport moves for a given impulse and is easily worked out using a digital caliper. You also need to set up your PWM to the laser PSU so you get full and accurate control of the laser power.

A more budget solution could use an Arduino with a GRBL shield - $30 or so will get you running.

But, for a few bucks more, I would recommend an advanced motion control system such as Smoothieware or TinyG/G2Core which has much better predictive motion, smoother motion and faster motion, due to ‘s curve’ acceleration and better corner management.

Most of the ball-ache with building your own laser is in getting a decent structure and in the wiring to make it reliable. You already have that.

Retro-fitting an existing system can be problematic if you have different connectors, which may require you to snip and re-terminate, but you can get a lot of stock adapting cables off AliExpress or just buy a mixed bag of crimp terminators and shells and make your own.

I’m not familiar with your machine, but they are all pretty much the same under the hood and it shouldn’t be too hard to nut out a suitable solution.

If you can post pictures (yes, in here) of the existing controller board - as close-up and well-lit as you can - it should be easy enough to work out a plan of action.

If you’re planning on doing primarily cutting, Smoothieware or TinyG are great choices. If you’re planning to do a lot of engraving, they may not keep up. I’m not sure what TinyG’s throughput is, but Smoothieware maxes out around 800 GCode instructions per second, which works out to 80 mm/sec when engraving 0.1mm pixels (254 DPI). GRBL-LPC running on the same hardware processes GCode 3 to 4 times faster.

TinyG is about the same as GRBL, but G2Core using a 32-bit controller is as fast as GRBL-LPC with the advantages of look-ahead and better motion-control.

I discussed the raster performance with the Smoothie devs and apparently that issue has been resolved.

If Klipper ever add laser support I will use that as it has a massive number of ops/sec. 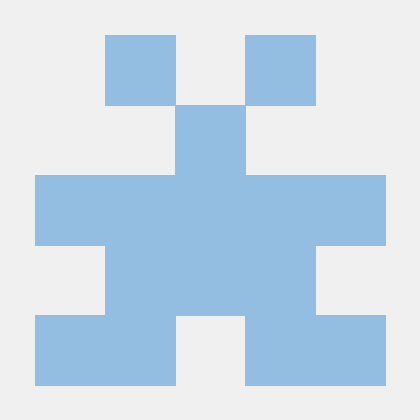 Klipper is a 3d-printer firmware. Contribute to KevinOConnor/klipper development by creating an account on GitHub.

I discussed the raster performance with the Smoothie devs and apparently that issue has been resolved.

As of when? Is this for V2, or is this an update for existing Smoothieware? If so, it would be the first I’ve heard of it. I’ve been begging for instant stop and fast raster from day one, but they don’t seem interested.

Long discussion on github with them declaring it’s now resolved.

The latest edge firmware still chokes if you exceed 80-100mm/s for rastering. So their definition of solved is different than mine.

I’ll have to go have a look for that - My experience has been the same as Anthony’s - I’ve never seen Smoothieware handle more than about 800 to 900 GCode instructions per second, which is easy when running grayscale or dithered images.

If it is the Github discussion on the LaserWeb repo, then no it was never truly resolved. The only way it was fixed was using a python streaming utility that Wolfmanjm wrote to test with, no one else seemed to be able to solve the issue. I would love to see a link to the github discussion ,would you happen to remember where you saw it?

In that specific discussion, he mentions that Smoothieware has a maximum theoretical throughput of 1000 GCode instructions / sec. That would be 100mm/sec with 0.1mm dots, but I’ve never seen it go higher than about 850 in practice without stuttering. I’d be very curious to see if this was a new discussion, or just the old one.

Sorry about the late reply to this. We have snow.

Anyways, I have a few pictures of the current cards in the FS. 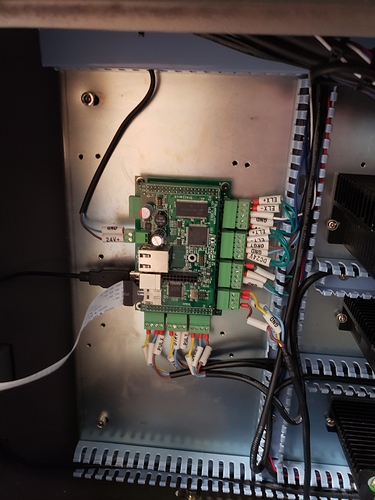 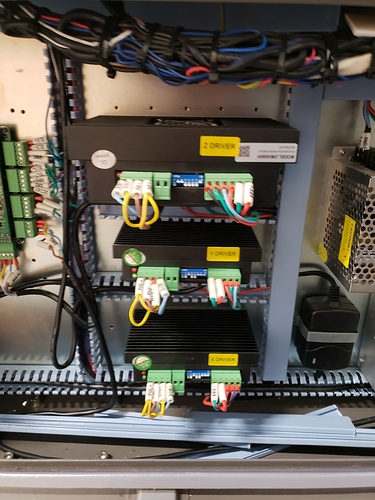 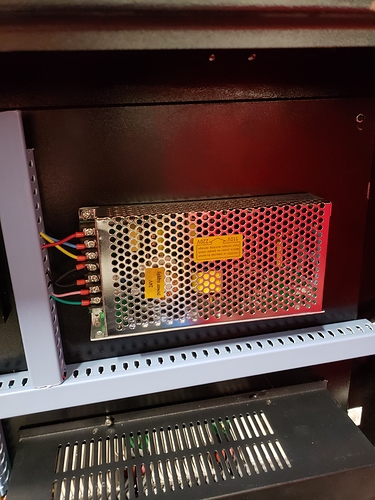 The top one is the controller card that was in the FS, it is not anymore since it decided to die last week.

There is a picture of the stepper drivers as well. I spent 2 years working for a company that builds control panels and this doesn’t look much different. The things I am most worried about are the difference in terminology that is used on the different cards( I’m sure google can help with that) the power supplies are all the same so that is easy. We do alot of both cutting and engraving which is why we got another ruida card. If anyone has some tips or pointers that would be helpful, I would appreciate it immensely.

As it’s so well labelled, it’s going to be pretty straightforward.

The settings will take some fettling, but the FS group on Google Plus will probably have all that info.

We have a 6554G we are putting in it. I of course have to take a dremel to the frame to make it fit. The dummy labels really do help. I wish the Chinese laser we have was labeled the same. The FS group has not been helpful. I believe the last message I got from someone on there was something along the lines of being a heretic for attempting the swap instead of upgrading to the new FS cards. >.<

So, what do you need help with? It’s nice that you can unplug those green plugs and have everything hold together while you rewire.

What exact models are the two units?