I created a power/speed matrix, following the YouTube tutorial on utilizing the Power Scale feature.
The preview shows the shading correctly (according to power) - screen shot attached.
But, when I send the file to my laser (50W Blue and Grey, 500x700, Ruida 644XG) it doesn’t adjust power. It does adjust speed correctly, but not power.
For each speed, the power max is 100, and min is 10. Power scale matrix is 10% - 90%. Fill mode.
If I just run each layer at a unique power setting (blue @ 50%, Green @ 30%) my laser functions correctly.
I’m stumped. 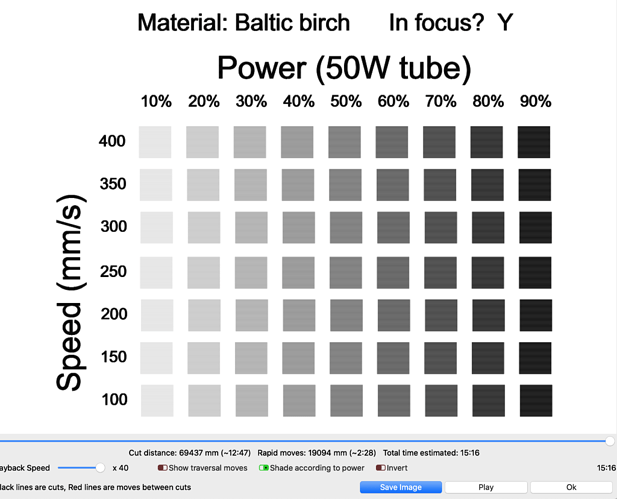 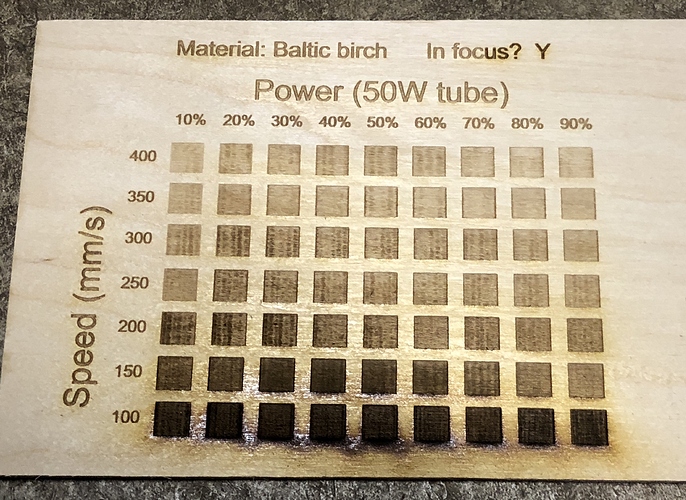 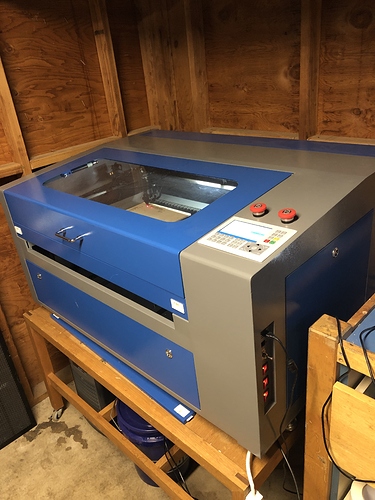 The test pattern you printed to input to your machine was printed with a linear gradient. The reason you do a test print, is the laser has a power CURVE. It is not even close to linear. My power curve looks more like a quarter circle. You need a calorimeter or a Dohicky to test your actual power, but that matrix should at least give you and idea of your curve.

Speed also plays in on any given material. You have to have the power on a particular spot to get the burn. Move too fast and it’s not on target long enough. Do that same test with different materiel and you will get a different result specific to the materiel.

I’m not really certain I understand what you mean by linear gradient. By that, do you mean the power steps are equal amounts (10% each), thus linear increases in power?

While yes, I am trying to figure out the power/speed combo, my primary issue is that the power scale feature does not appear to be working. The power % shown on my controller never moves from 99%.

This thread should be helpful:

Power Scale is done using the commands that the DSP controllers use for ramp mode and grayscale output, so it’s explicitly limited to being a percentage of the value between min & max power. I could, conceivably, have a power override, but there would be pretty rigid limits on the usage because of the way the DSP controllers work. I can change power for an entire set of cuts, for example, but not mid-way through a cut like I can with power scaling. With power scale, you can do this: [image] T…

I understand the math and the conceptual side of it.

What I am trying to solve for is “why isn’t my controller understanding or obeying the power scale settings”?

Post your file here so we can have a look. I haven’t tested the power scale feature with a 6445, but I know others have, and reported it working, so it’s possible that something is amiss in your file setup.

I finally got a chance to look at this file - The only thing I see that might be causing issues is that all the fills are set to fill shapes individually. That shouldn’t matter, but it’s worth changing it to fill all shapes at once anyway because it will be significantly faster. I’ll get a 6445 set up and try the file, but it’ll take me a day or two to get it wired.