The unit responds properly when the “Home” button is clicked, moving the laser head to the left, then down to the bottom, but once it completes the homing sequence and I click the “Get Position” button, the X and Y positions show “-299”, not “0” like I’m expecting.

Also, I have to execute the $21=1, $22=1, and $23=3 every time I start LightBurn. I can save the settings under Machine Settings as an “.lbset” file, but how do I get LightBurn to load these settings on startup?

You likely have a coordinate offset set. Enter these commands into console and respond with results:

These GRBL settings are meant to be permanent when set and persist within the controller memory. However, some vendors deliberately disable this capability and these values cannot be updated at all or do not survive a power cycle. Sounds like that might be the case for you.

There’s no provision in LightBurn to auto-load something like this. You could potentially create a Macro in Console to set these quickly each time.

I’d suggesting going back to the vendor or manufacturer and complaining to see if there’s an update that can change this.

I started from square one, powering everything up. I executed the $21=1, $22=1, and $23=3 commands, then click the Home button. It homed as expected. I then entered the commands and here are the results:

Just seems odd that it homes properly, but reports the -299 values. Thanks!

I’m guessing that it would take an update to the firmware to get it to permanently save the values, which would not happen any time soon. The Totem S doesn’t ship with the limit switches. You have to add them yourself. Seems goofy that they would have the connections on the mainboard for the switches but then not allow the values to be saved.

Since LightBurn has the ability to “Auto-home on Startup”, it wouldn’t take much to allow inclusion of the S21/S22/S23 commands along with the “Home” command. I’m going to submit an enhancement request to LightBurn.

Your firmware must assume that upper right is origin although you have it homing to lower left.

I experienced another issue yesterday that I need to trace further. I ran a simple project with two layers. The first was an engrave, the second a cut. When it finished the “engrave” layer, the head moved up to the right several centimeters and then back down before starting the “cut” layer. This worked ok because the object was really small. I then enlarged the object, and this time the head max’d out the travel to the upper right before the “cut” layer, causing the steppers to grind a bit. I’m not understanding why the head would move away from the object between layers. I just started using LightBurn yesterday, so I understand that I have a LOT to learn.

Thanks again for your assistance…

Since your coordinates were not correctly zeroed out yesterday I’m assuming you were working with Start from in the Laser window set to “current position”. If so, LightBurn won’t necessarily know where the laser is positioned on the machine and will be happy to send instructions that potentially crash the head.

This will prevent most crash scenarios.

You may also want to configure soft-limits to be on ($20=1). This will prevent certain additional crash scenarios.

Regardless of the positioning method, why would the head move far away from the object between layers? The laser work area is 300mm x 300mm, and it started down in the lower left quadrant. The object (both layers) is only 30mm x 40mm, so if it started in the lower left corner for the first layer, I would expect it to return to that point when starting the second layer.

Likely something in the design. Upload here and I can take a look.

See my commentary on AtomStack here, this sounds similar:

AtomStack sent us one of their units, I just received it a few days ago and so far we have just assembled it, but not yet run it. I did already take it apart though

so I know that the board in there does look very similar to the DLC board. It has $30 and $32 GRBL settings set correctly out of the box so it can be used with LightBurn immediately without any settings changes. However, I tried changing some settings and noticed they did not persist across a power cycle of the mach…

How to permanently write to controller Atomstack

Sure, I’m happy to make a guest appearance. As Rick vaguely alludes to, I’ve been in the process of getting a new place and moving for the past while, as well as wearing many other hats, so have not been able to make much more progress than what I shared in that topic linked above. The manufacturer appeared to have butchered EEPROM support in their version of GRBL that they flashed on the controller and shipped with their units. You’ll need to flash stock GRBL onto the board, plain and simple…

I believe that the issue was related to the setup prior to having the limit switches installed. LightBurn was set to “Current Position” instead of “Absolute Coords”. Now that I have everything setup, it worked properly.

Also, when I executed “G28”, the head moved to the back-right corner and ground the steppers. I’m assuming this is because the homing was handled by the controller board and not positioned by LightBurn.

I’ll hold off flashing a new firmware until I can be assured I won’t brick he unit!

When I click the “Home” icon in LightBurn. what command(s) are being sent to the printer? I ask because when I click the icon, it performs the expected homing sequence using the limit switches.

when I executed “G28”, the head moved to the back-right corner and ground the steppers

I’m not familiar with G28 but I suspect it’s going to machine 0,0 which we know is back right.

When I click the “Home” icon in LightBurn. what command(s) are being sent to the printer?

I believe it uses $H to initiate homing. You can see all chatter between LB and the controller if you enable “Show All” in Console.

I believe that I need to move the limit switches to the back right instead of the front left. I initially went with front left because of a video I watched and that’s how it was done, plus, my 3D printers both home to the lower left and that’s what I’m used go.

What leads you to this conclusion? It should be arbitrary how this is done.

When I send the commands to the laser to set using the homing switches in the lower/left, it head homes to the lower/left, but when I start a print, the head shoots to the back/right and grinds the steppers. It appears to be sending a different “home” command at the start of the job. I’m still learning about the gcodes as well as what the laser interprets.

Oh. Thought we were past that.

Can you do the following please:

I’ll do that after work today. I spent the weekend adding wire chains to the setup. 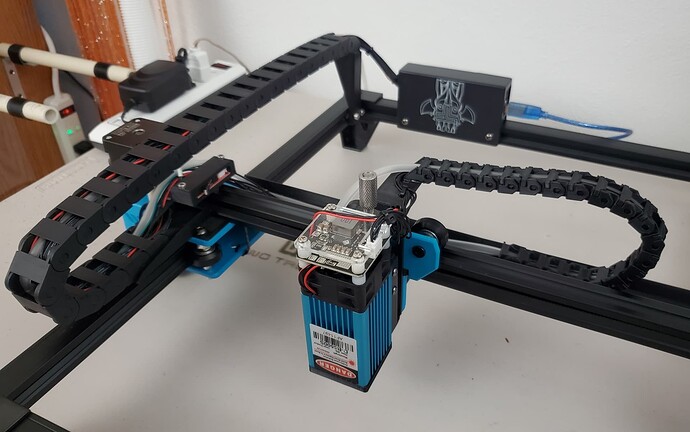 I have a couple of 3D printers, so I was able to design and “print” custom mounts for each end of the chains.