For anyone having issues with MacOS / Ruida / USB, please keep the comments in this thread for now so we can track issues.

Let me know if it transfers successfully for you, and if not, please reply with which version of MacOS you’re running.

1 Like
Updated to the latest software version and now I have the machine paused or busy message
Strange problem , not start
File will not send to the laser from LB, I am using a MacBook Pro
Version 1.0 - MacOS issues with Ruida
Issue engraving photos
Font problem, line mode, using latest Mac version
New updates issue
Lightburn not connecting to Mira 9
Path Frame Stops in the Middle of a Path - Mac/Ruida
Software update not working
Odd Lines not in design
Files not being received by machine
Files not being received by machine
Problema al enviar corte a maquina laser
Cannot find my laser
Suddenly throwing the odd engrave or cut line where it isn't supposed to
ned (ned) August 29, 2021, 9:47pm #2

thanks you will try and report if is ok .

Downloading the 02 version was an instant fix, so thankful for the suggestion!

Frame stops in the middle of the path. MacOs with Ruida

With this posted version?

I ran this two nights in a row on my M1 mac and I did not have any of the issues I experienced in the past. I too have noticed some unusual behavior with the frame action.

To add to the above comments I have seen some irregularities in the frame action but I cant pinpoint down what version I was on :-D. I will watch the frame over the next few nights and see if it reproduces.

Thank You,
I ended up uploading an older version of light burn to get it to work.

There seem to be translation issues when using Rosetta on a Mac Mini M1, especially with text on a curve. The file was edited using Lightburn 1.0.02 on a Mac Mini M1, but the resulting .rd file created on the M1 resulted in the curved text becoming “machine font” output with squared, open letters of different sizes. Taking the same file to an Intel-based Mac and creating an .rd file on Lightburn 0.9.24 resulted in proper font output. Laser settings were unchanged, but cut quality was also different between systems (much darker on the Intel system). Images below. Neither the font nor the file were altered between attempts. 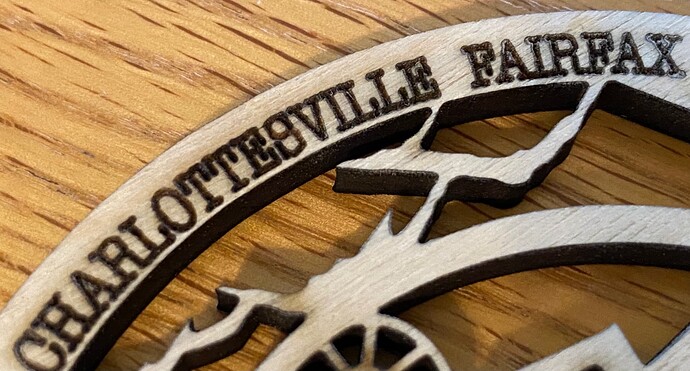 Also, files were transferred to the laser by USB key, due to a lack of ethernet or wireless in the garage.

Can you just save an RD file from both systems and email them to support@lightburnsoftware.com along with a link to this post? I’d like to compare the files to see if there are differences.

@LightBurn I can confirm I am experiencing framing issues as described. I am still using my M1 mac with usb to the Ruida controller.

Its weird… I have seen several cases where I hit frame and it will run on one one side and stop and other cases where it runs on two sides and stops. It does not return to where it was it just stops. I see no errors on the machine and nothing pops up on the screen. The good news is its only slightly annoying and only causes problems when I have to move things and line it back up again. Other times it runs just fine. I have about a 75% success rate running frame. I have only seen it happen so far with the square frame and not at all yet on the elastic frame. It could be that I don’t use the elastic frame much.

I have not had a chance to try the PI out yet to know if the issue reproduces there yet. We are in the middle of a release and kids/wife started school

But hopefully this week