A couple of guys here on the Lightburn forum provided links to a small laser engraver on Amazon … for just $79 (now $75 since I bought one!).

Okay, the cat’s out of the bag… I bought one. I’m always looking for something new to play with as I’m slowing down with age… but I’m still quite comfortable with these little laser machines, so I figured, “What the heck!”. I can always use the parts…

Absolutely shocked… ordered on Aug 9th, received on the Aug 12. Not for everybody but I will say that this is one sturdy little machine. All metal and uses 2040 (vs 2020) extrusions. Uses cable chains so neatest wiring I have on any of my other machines. Four M5 screws for the gantry and a couple of M3’s for the end of the gantry cable chain. Working area about 220mm x 290mm and 3W laser (claimed). 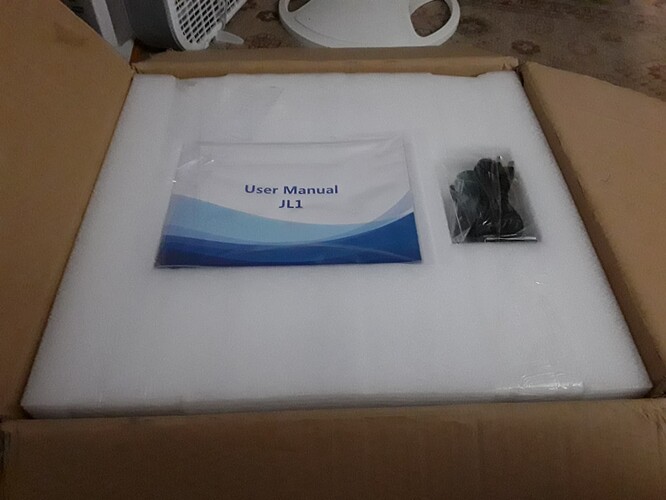 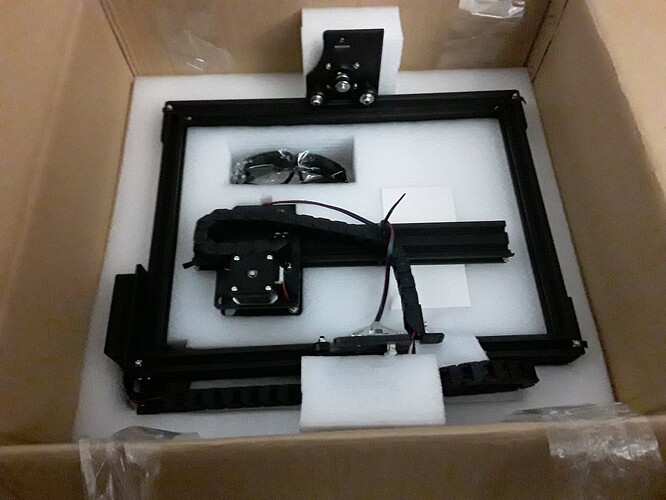 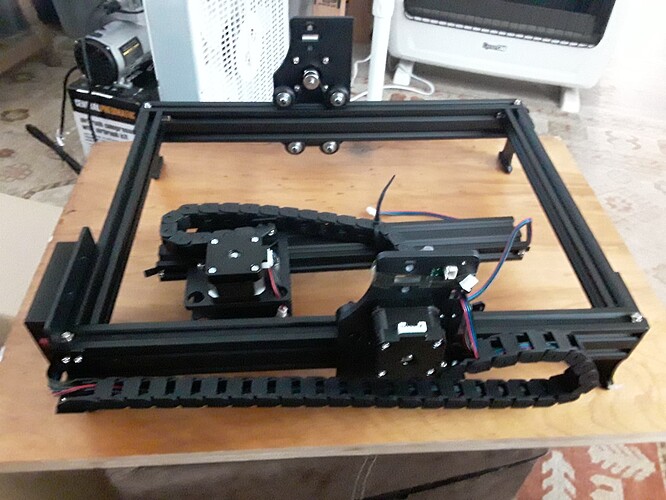 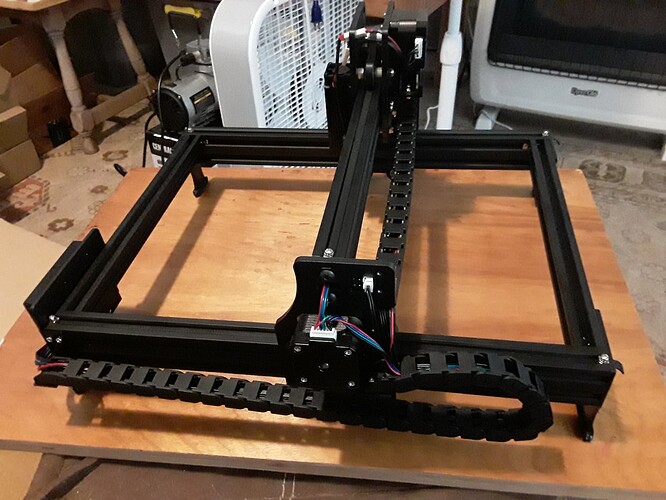 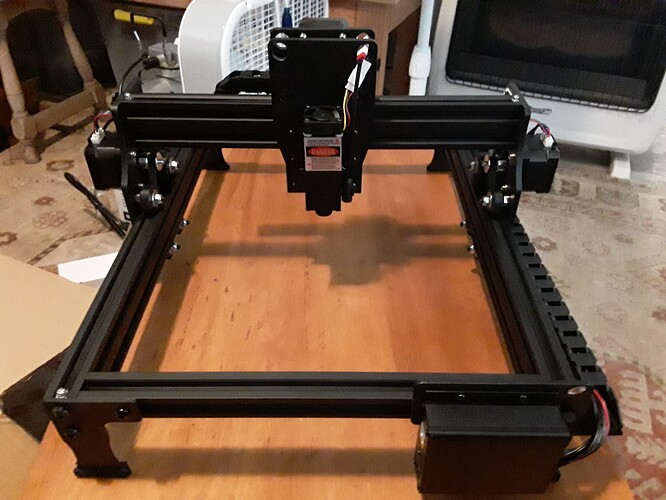 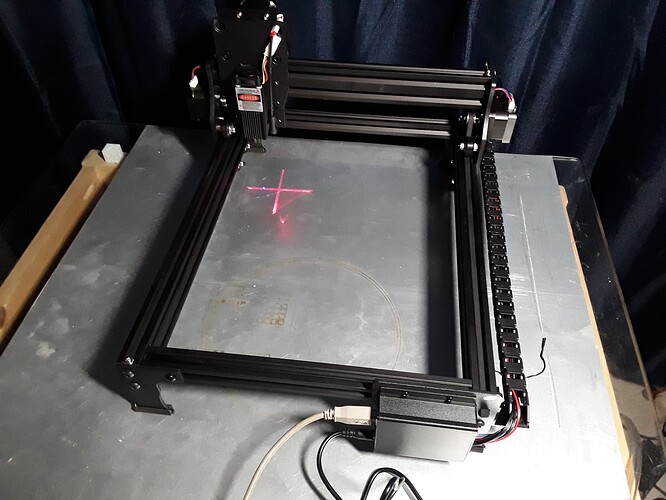 Powered it up… it homed and parked itself in upper left corner with a red cross and small laser dot. So everything appears to function as designed. Which is okay if you can read Chinese and don’t mind using crappy proprietary Windows software… which I didn’t install or try to use. I already knew about all that from the LB discussion thread… so was ready to make it better.

Opened the metal box containing the controller board… JL1 Mainboard. Found the X and Y connectors and fished them out of the box… along with the connector with 3-wire laser connections… 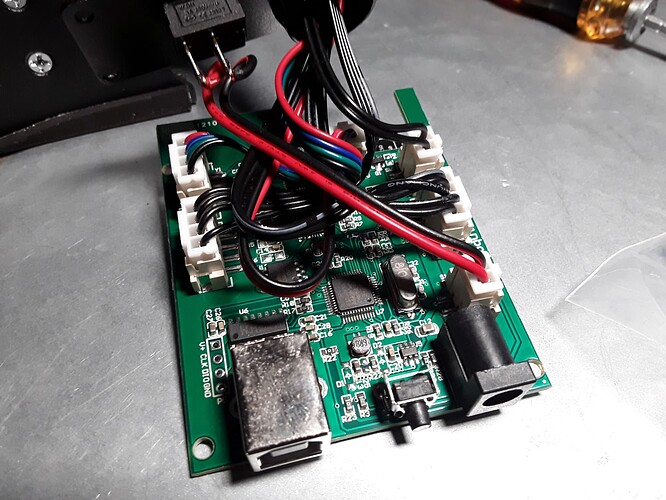 Took one of my trusty old Eleksmaker Mana SE 2-axis controllers that I’ve used to test many machines and was able to easily find corresponding connectors and pins to control machine and laser. I left out the limit switches and red cross laser… don’t need or use them 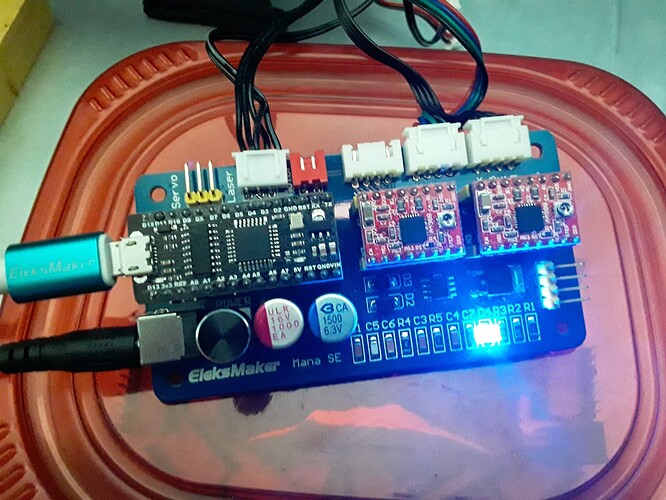 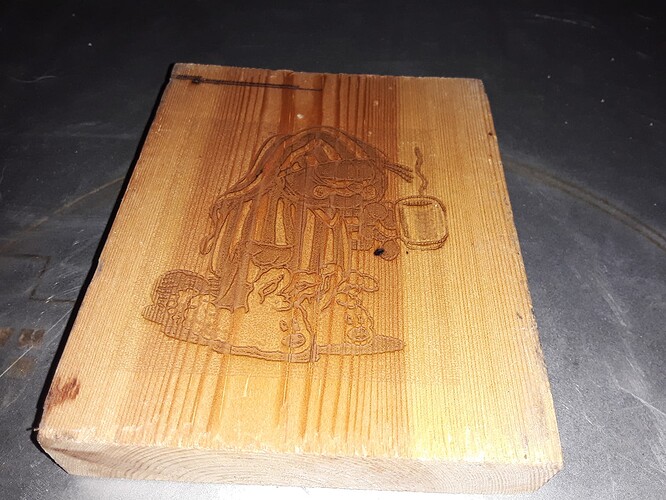 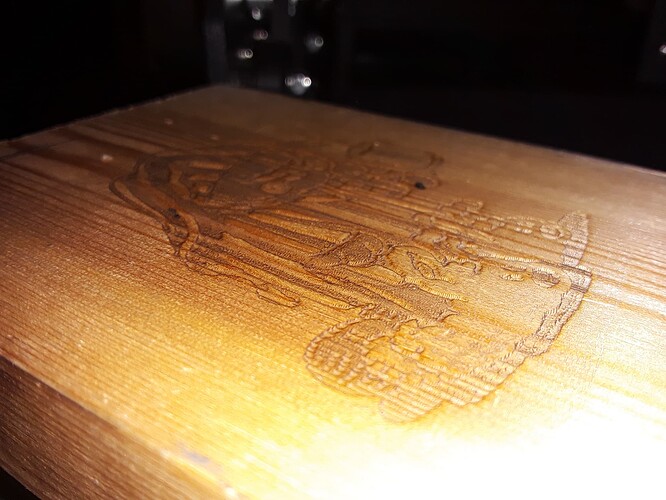 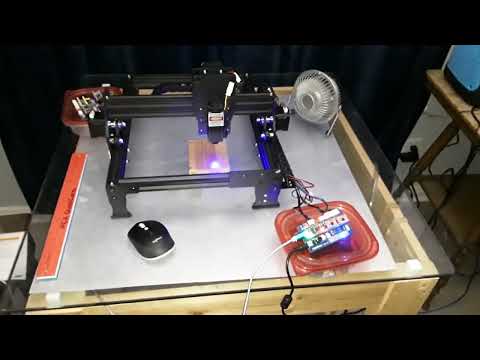 I’m genuinely impressed with the physical qualities of this little machine and, like I heard one fellow say, in effect… if they’d simply put a Grbl-based, Lightburn-capable, controller on this thing, they could probably sell a million of them.

Of course, I needed another machine like I need another hole in my head but there it is. But if you’re a little bit handy and looking for a low-powered machine to do small stuff like ceramic tiles and rotary engraving… this machine should handle it nicely. I’ll also add a Z-lift mechanism to it to enable easier focusing but otherwise it’s a nice basic machine that I’ve enjoyed messing with…

if they’d simply put a Grbl-based, Lightburn capable, controller on this thing, they could probably sell a million of them.

I picked up one also… made the same comment elsewhere… They could do it with this board, just a firmware change… it’s a stm32 controller…

Ordered this, be here next month …

What cn the original board do? (I just ordered one as well)/

Jack, it was probably your comment I was referring to… I just couldn’t remember where I’d seen it. Thank you, and I agree with you completely. I’ve since requested the Grbl firmware upgrade from Wainlux for the JL1 board. Hopefully they’ll respond.

I’ve since requested the Grbl firmware upgrade from Wainlux for the JL1 board. Hopefully they’ll respond.

@LsrSal posted the firmware files if you hadn’t seen them. Check it out:

Light Burn is first hit on Google while searching JL1+GRBL. Those who search know that to surprise and frustration after acquiring machine with JL1 board - it does not speak GRBL dialect and not recognized by most and best laser carving software. It is certainly possible to recompile GRBL for this STM32 based board from many sources available on GIT, but I can imagine this is beyond abilities of many. Well, there is easy option to get these JL1 boards working with this and other software: Wain…

Thank you. I’ll check it out.

In the end, Lightburn says ‘ready’ but the command window shows it’s waiting on a connection.

The flash operation, just clicked the upgrade, got a green bar then back to the ‘upgrade’ screen.?

Upgrade.exe do a similar job for you or was it more verbose? 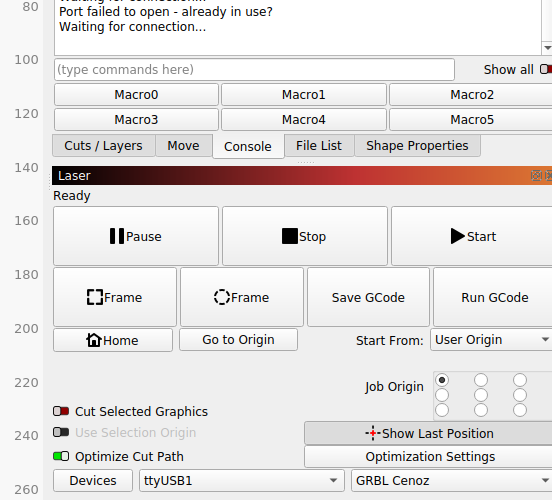 Wonder if the flash failed? Tried to re-run upgrade.exe but complains of ‘no device found’

EDIT - it will find the device, but the progress bar makes about 80% and it’s back to where you click ‘upgrade’.

In the move window, nothing responds, as was expected.

Some progress… successfully flashed the JL1 board with Grbl 1.1f (@LsrSal’s ROM.bin file). I use Chromebook/Lightburn almost exclusively but decided to fire up my Win7 machine for the first time in a couple of years. It took a while to update wifi and log into forums. Yuck! 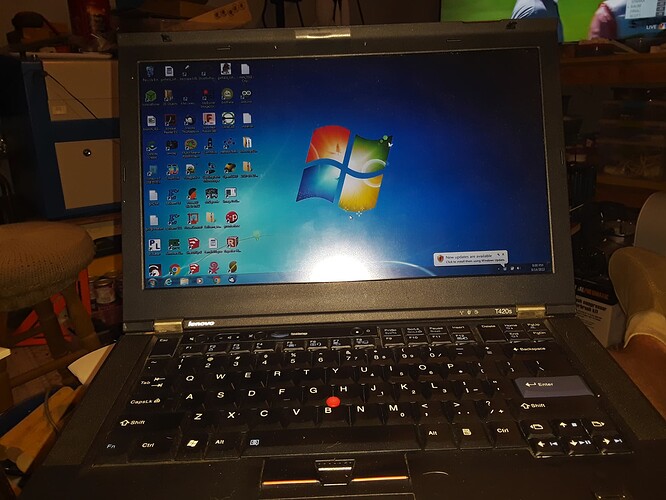 Downloaded @LsrSal’s zipfile and extracted ROM.bin and upgrade.exe files to Desktop. Found instructions from @LsrSal in a different thread to…

A very simple window pops up with one button and progress bar… apparently just defaults to ROM.bin… 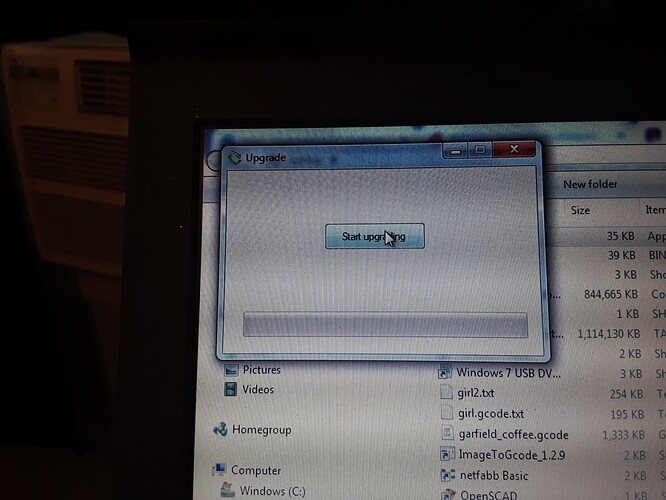 Clicked “start upgrading” button and indeed a green progress bar comes up and completes. No messages, status, nothing… but no error indication either.

Since I had previously swapped out the JL1 with a different Grbl controller, I reconnected the JL1 board back up to the laser engraver. Moved over to Chromebook and Lightburn… connected USB and got indication that a USB device was detected and connected to Linux side. In LB I was able to connect and console indicated GRBL 1.1f. It acted a bit flaky at first and kept locking up until I also connected up the limit switches and adjust some settings. It’s now settled into a predictable state and I’m air-milling now under Lightburn control. 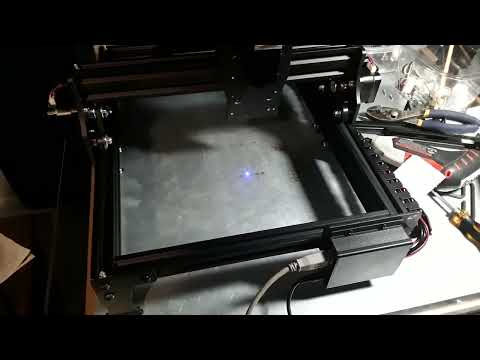 So, it looks as though it’s pretty easy to flash that board with a ROM.bin file and the .exe. Hate to have to fire up Windows but, given the tools I had, I guess that was my only recourse. [I now feel a little “dirty”

] Given the generic filenames, I had no way at first to know for sure what board that ROM.bin was set up for until I finally tamed the erratic operation… 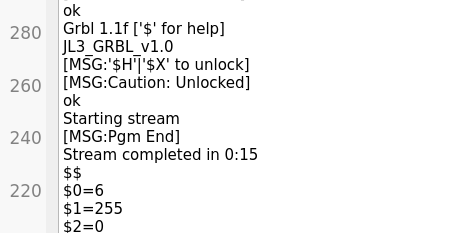 The upgrade.exe appears to do what it was supposed to do.

Same thing I had before. The green bar on mine goes to about 80% and that’s where it goes back to ‘start updating’… The green never fills to 100%

I have no issue with soldering stuff, so a header is simple, but I need to know where it is and what the pin out is…

Believe these are the pins for the STLink connector. Circled in red with PCB marked. 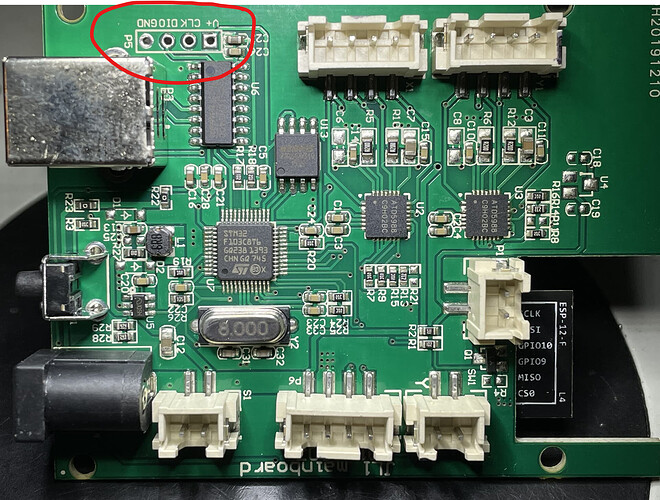 Jack, I think I’ve confused the issue, posting to the other thread you’re engaged in with @LsrSal. He asked you about soldering… and you’re last post here seems to be related to his question. I apologize for the confusion I’ve caused. – David

I’m confused easily, don’ let it keep you up at night

Still not sure if I flashed it with a known ‘bad’ binary or ?

@dkj4linux I curse you! I had to order one too!

Unfortunately I will not be able to play with it for a week or so. My son is getting married this weekend and cutting into my laser time! Oh well.

I am looking forward to making this able to use LB. Wish me luck!!

LOL. In the V1Engineering forum, another place I “inhabit”, a poster just informed me that the price is now $99! I hope that’s not what you paid. Just a couple of days after I ordered mine for $79, they lowered the price to $75… and I’m pretty sure they said “thru August”. I felt good they had created a “special” for those who might want one… and was even considering buying another one

The original Cenoz branded offering is indeed $99.99 but there are a couple of other listings for what looks like the same laser for a $75 and $79.99 respectively.

I hope that’s not what you paid.

I paid $79.00. I had to wait because I had a $25 Amazon gift card that I wanted to apply to it and did not have it available when it was $75. I did try to see if there was a cheaper price but unfortunately I did not see the $75 one. It will be interesting to see how long it stays cheap

It will be interesting to see how long it stays cheap

I found a different listing for $59 back when this first came up. I’m sure these will just make the rounds for a while with fluctuations in price. Looks like this has had some pretty severe price swings the last few months.

I found a different listing for $59 back when this first came up.

I believe that was for a unit that was half the size. I could be mistaken though.

Like @jkwilborn said… just think of how many of these things they could sell if they ditched the proprietary firmware and just put GRBL on them. Wouldn’t cost them anything and instant LightBurn compatibility…